Being the neurotic freak that I am about gastric health, it was absolutely guaranteed by the universe that I would end up with a sensitive mare who has probably been gastrointestinally fried for most of her entire life. Longtime readers will remember her huge, swinging, pendulous belly long after she had given birth to the Red Pest, and all along I have been saying that I have suspected ulcers/digestive issues/worms. Here we are a few months later, still trying to perfect the issues - while her last fecals were shown to have only the most trace amounts of strongyles in them (so few that the vet called it a negative fecal), the likelihood of still having encysted strongyles is pretty high. If she does have them, they are likely causing ulcer issues. Deworming can also irritate ulcer issues. What is a girl to do?

Well, fecals will never tell you if your horse has encysted strongyles or not, so much in the way that you still need to hit for tapeworms (which also don't show in fecals), you usually just have to go for the big guns if your horse has suspected issues with encysted creepers. Your two legitimate choices are a Panacur PowerPac, or Quest/Quest Plus. The PowerPac is a huge pain in the butt, a 5-dose pack of megawormers that need to be given once a day for five consecutive days, but it gets all encysted stages of parasites. The Quest does not get Stage 3, but it is only one dose. As I understand it, fenbendazole (PowerPac) is a cousin to omeprazole, the drug used to treat ulcers, and is a slightly milder/safer drug than moxidectin (Quest), and so therefore can be usually given to a somewhat ulcer-prone horse relatively safely. (Or so I hear.... ulcers can be aggravated by pretty much everything in the world, so who knows.) Everywhere you turn, somebody is going to tell you that their horse responded beautifully, or it made their horse horribly ill, or it didn't work, or it was a miracle, or whatever. Sometimes, you just have to go for it and stop listening to what other people have to say about it.

As we all know, Immy is a picky eater. Anything weird in her food, and she won't touch it. If I so much as keep her favorite cookies in my pocket for too long, she thinks they taste like pocket, and won't eat them. (Cookies fresh out of the bag are ok though.) She won't eat apples, carrots, mints, or most types of cookies at all (barring those horrible rock-hard Manna Pro cookies... she loves those!) Getting her to eat nasty things is not a lot of fun. I have had success in the past with mixing a dewormer into her food, but that was before I owned her and she was still on a junky sweet feed. That sugary goodness concealed the taste of the small dewormer, and voila! Down the hatch it went. The last time I dewormed her I had success with the same method, and figured I would shoot for it again this time, seeing as she is SO bad about being dewormed.

Well, so much for that idea! One taste of her dewormer-filled meal and she spit it out and turned up her nose. I convinced her to get about half of it down, and the other half at dinnertime, but she was not happy about it. The next day, I mixed the next tube in with her breakfast, and she refused to touch even one bite. I couldn't even get a bite into her at dinnertime either, so I gave up and decided to just paste her with the next tube. What a horrible nightmare that was... I essentially had to back her up into the corner of a stall and hang on for dear life while she flung dewormer in every direction, getting it all over her face, all over me, all over the walls, and generally everywhere but down her throat. Of course, following this I tied her back out next to her dinner, and came back to find that NOW she was eating it. (She only ate a few bites, but still. Mares.)

Now, of course, I am Scary Dewormer Lady. She did not want to be caught this morning, but I managed to get her so that I could pull her blanket off and offer her up a completely dewormer-free breakfast. She turned her nose up at it, and refused to touch a single bite. Adding insult to injury, she needed her next dewormer tube, so another battle to get it into her ensued. (She was better today, and I got the entire tube in, but no matter how quiet I was about it, she still trembled all over and snorted at me like I was the boogeyman. She is absolutely terrified of dewormers!)


Four tubes down (well, one party consumed...), and only one to go tomorrow. Will we make it through this saga? Is she burning up with ulcers? Am I going to give them to myself as well? Who knows, but I quite imagine that whatever the dewormer is killing in there is making her feel pretty crappy, so she may have a few days off, depending on how she is doing. She is snarfing up her hay like crazy, as usual, which is great... if she starts to turn her nose up at that I am going to kill myself. Either way, despite ALL that I have done for her gut health, I am probably faced with an upcoming ulcer treatment.  I know she's a picky eater, and I know she's a nervous personality, but... I can't not fret about it. I've never had a picky horse who turned away from food before, I can't NOT think ulcers automatically!

Our trial of blue pop rocks is ordered, so now I just have to wait for them to get here... in the meantime, there is UlcerGard to get us through. In terms of other supplements aside from all of the herbs and calming things that we have tried or she is currently on, she is already on EquiShure but someone suggested that I should try RiteTrac or Egusin... has anyone used these? They are not cheap, so any input would be appreciated! I definitely think the EquiShure has helped, but it isn't enough.


The girls getting ready for a ponied trailventure the other night: 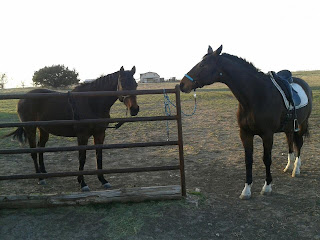 And out on the trail: 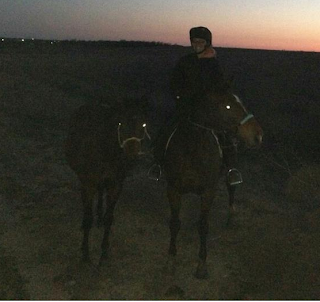 Immy had to cross a few creeks, splash through mud puddles, and trot alongside P for quite a long ways. She was SO GOOD! (She jumped most of the water crossings instead of just going through then, but she got over them! It's a great start!)

So in reality, it isn't all bad... it is just very, very hard to get all the puzzle pieces to come together properly. We'll get there!!
Posted by Andrea at 11:47 AM