After her conditioning ride on Saturday (which now looks pitifully wimpy compared with what we did this week) and a seriously intense lunge session on Sunday, I hopped on the redhead for a dressage ride on Monday. I thought that *maybe* she'd be slightly less uppity, but she was more on fire than ever. The fitter she gets, the easier everything becomes for her.... it's a vicious cycle! She was still in heat (although thankfully coming out), and was just not having it that day. She was locked through her left side and bargy through the bit, and all she wanted to go was GO. So, I let her go - we just cantered around in a half seat (in a dressage saddle) for about 10 minutes. The more we went, the more energy she had. After trotting and cantering until we were both totally lathered in sweat, I took a walk break and checked my watch - surprise! We had been going for AN HOUR AND A HALF. She had FINALLY chilled out a little by that point, so I decided to pick up the trot again and end on a good note - she took a contact and bounced off happily, finally settled into her work. Two hours of work, and despite being totally wringing wet from heat to tail, she didn't seem remotely tired. 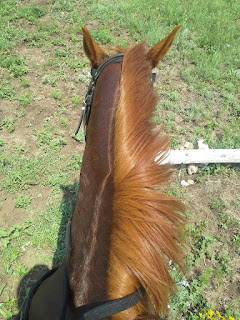 No, she's not that dark... she's just soaking wet.

And she wasn't remotely tired the next day. The following morning S and I were up at the buttcrack of dawn to set out on a VERY early morning trail ride at one of the local state parks. The forecast for the late morning and the rest of the afternoon/evening was for thunderstorms/hail/tornadoes/death, so we decided that if we wanted to ride, we better do it as early as possible. We figured that we would go until the weather turned, and then we'd head home.

"Go until the weather turned" ended up being a LOT longer than we had anticipated. The weather was actually really nice (overcast and about 80), and we were enjoying ourselves. We trotted and cantered for quite a ways, stopping here and there whenever there was water to let the horses drink and let Monster Dog go swimming. O was a VERY good girl, cruising along behind her buddy on the buckle, relaxed and interested. She only had two moments when she almost totally lost her brains, both times when we were going down an incline and her friend disappeared around a corner in front of her. She doesn't have much of a problem with leaving the other horses, but when they leave her? Just shut the state down. She exploded forward, I grabbed back my reins, and she hit the contact and had a nuclear meltdown. Her legs were going in every which direction so fast that I'm fairly certain that we were levitating, despite the fact that we were going nowhere except possibly backwards and sideways. She shook her head as hard as she could, threw herself around, pitched a general fit, and tried to smash herself into a tree in protest. When that didn't work, she quit, deciding of her own accord that she was going to walk forward like a lady, damnit. She was bug-eyed, sweaty and champing furiously on her bit, but she was going to WALK and she was going to do it because SHE decided it was time to do it. Once back within sight of her buddy, she relaxed, but obviously this is going to be a continuing piece of work. Whenever Gogo would have a mare moment, I used to always say, "Oh, Gogo...." I guess in this situation it would be, "Oh, O..."

Other than her little oopsies, she popped over the logs, marched into the river, and moved smartly along, tireless for the entire ride. Although, she DID stop halfway through the river and refused to move again, despite me pony-kicking her in the ribs as hard as I could.... S had to actually come behind us and smack her on the butt with one of her split reins. (Note to self... bring bat next time). 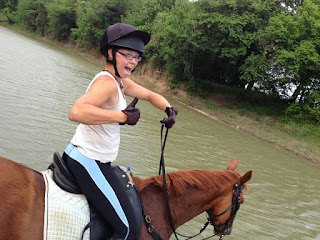 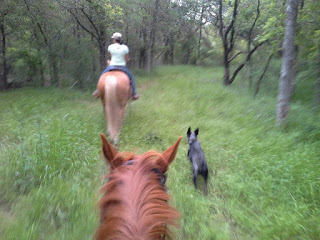 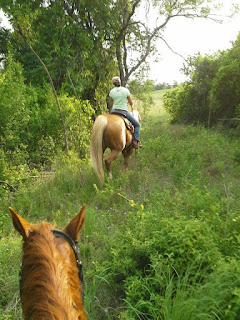 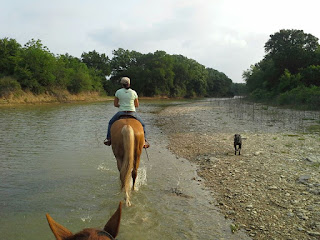 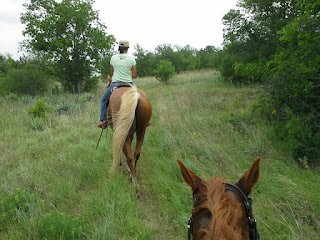 We ended up logging almost 5 hours worth of saddle time, and we went for 19 miles. We made it home just in time for the downpour to begin, but thankfully there were no tornadoes/hail/general death to go along with it.

Early the next morning, S convinced me to get up again at the crack of dawn for yet ANOTHER ride! I figured I'd just take O for a gentle little walkabout, but she had other ideas - she was fresh as a daisy, and had I not known that I had ridden her for nearly 20 miles the day before, I never would have guessed that she had even been worked at all. We logged ANOTHER two hours, with some more trotting and cantering, as well as some more freakouts when her buddies left her again. 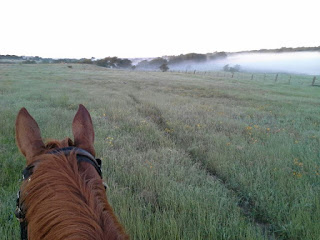 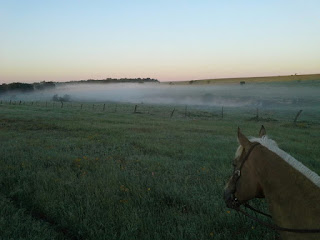 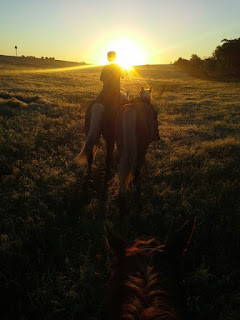 Once our ride was over, we cooled out, had a bath, relaxed for awhile, and loaded up to head to the vet. She's a bit hit-and-miss when it comes to loading - sometimes she hops right on, and sometimes she stands there like a mule and refuses to move. I resorted to my old standby - I ran a lunge line from her through the escape door and back out to where I could stand behind her with a dressage whip. She was NOT amused by this, and ran back and forth across the ramp a few times before decided to walk on of her own accord. Sorry mare, but we have places to be, so too bad!

Once at the vet, we checked her mouth out for issues. She didn't have a ton going on, but she did have some sharp edges, especially on her left side (which is the side she is generally harder to bend on - which of course makes sense), and a few little nicks in her cheeks.
I would have preferred that the dentist could have made it out to do her, but I checked her out after she was done, and they did a pretty good job. Thankfully, the issues she had were small and run of the mill, so there wasn't anything major that needed to be done. 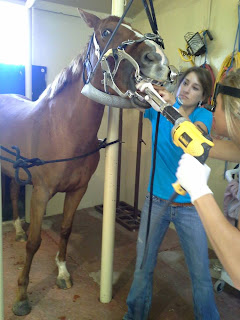 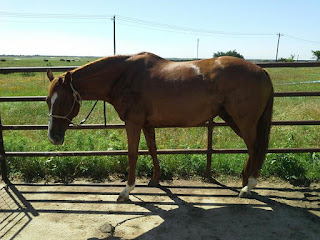 She was still a bit drowsy after we got home, and sweaty from her sedatives. She got another rinse, some liniment and a rubdown on her legs, and some extra cookies for being a good girl (once she woke up, of course).

She's had the past three days off, which she needed. I would have liked to work her today (and wouldn't have minded putting her on the lunge two days ago for a light workout), but it has been pouring on and off, and everything is sloppy mud. On Thursday, the day after her dentist appointment, she also had four HUGE fat legs! She was totally sound, they weren't hot or tender, and she wasn't running a fever, so the only thing I can think of was that she reacted to the liniment poorly. With a leg washing and a gram of bute, they all returned to normal within the day... interesting to see. I used a different rub following this, and while it didn't cause another reaction, she spent several minutes gnawing at her legs like it bothered her... I almost washed it off, but she quit chewing, and hasn't done it since. She also pitched a bit about the wound salve I put on one of her little cuts, and ran around rubbing herself on things and rolling until she had properly wiped it all off... clearly the girl has some sensitive skin... or she is possibly just a very demanding personality who only approves of things when she decides they are to her liking.