Keep your panties on, we're working!

Spring is springing and the hormones are raging here in Texas, a fact that is not lost on O-Ren. She is all but crawling over the fence to get to S's boys, both of which must look like Prince Charming with their palomino good looks and flowing golden locks. (I have no idea how she ended up with two palominos at the same time... I suppose in the same way that I said I would never own a bay and am now on Bay #4.) P-mare and Imogen are more appropriate in their girlishness - Immy ignores them like the dignified queen that she is, and P-mare, though very distracted whenever they come around, is far more interested in food than anything else.   O manages to keep herself together for the most part, but there is an awful lot of screaming going on whenever she is out of sight of the others, and under saddle she is a totally distractable wet noodle. (Can noodles be distracted? I'm not sure but that's what riding her feels like right now.) She did the same thing last month when she was in heat, although there was much more in the way of flailing and rebellion last time. She's been excellent under saddle (for her) up until this week, but she's been a bit of a twit ever since she came back into heat. Not that she has been BAD, per se... just not as good. I suppose being a hormonally challenged tween will do that to you.

Ignoring the obvious wardrobe malfunction happening in this picture (the saddle pad without billets about to fly away in the breeze), she can sure sit down and power on, can't she? 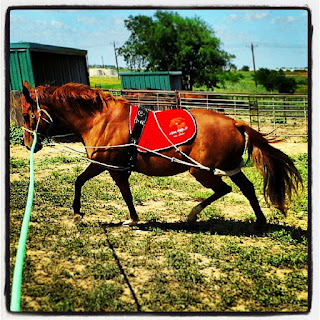 Under saddle, we've been working on much of the same - walk/trot work, with some canter tossed in here and there, just keeping the same rhythm and speed. Val mentioned dental work and I agree that this might be part of the issue - I'm still trying to match up with my dentist for an appointment but I'm partly convinced the man is a phantom. If I can't get ahold of him soon, she'll just have to go to the vet instead. I don't *think* she has much in the way of dental problems, given how much she has improved with the contact both on the lunge and under saddle, but it certainly doesn't hurt having it checked out. She was supposedly done recently, but she also supposedly had her feet done 6 weeks before I got her.... right, sure she did: 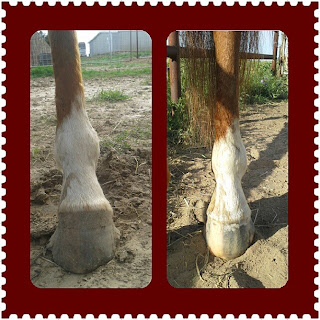 First photo is when I got her (pre-trim), second photo is after her second trim, which was last weekend. I'd say there's a slight improvement, wouldn't you?

Despite being in flaming, violent heat, she's still adorable. I broke out the clippers for the first time and took care of her bridlepath (which I had done with scissors before) and whiskers - I have no idea if she had ever been clipped before but she thought it was great fun and tried to eat the clippers. She cleans up nice, don't you think? 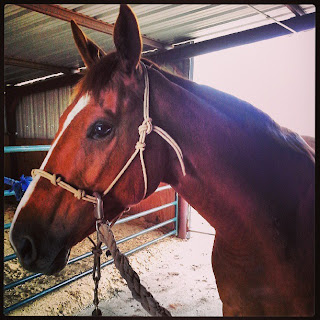 Yes, yes... warmbloods DO look funny in rope halters. For whatever reason, I have transitioned totally away from leather/nylon halters and only use rope now, mostly because they don't break if your horse pulls back or does something goofy. Once upon a time I always made sure my horses wore a breakable halter, because I thought it was dangerous to not have something release-able on the horse should they pull back. Unfortunately, when your halters break and you have a smart horse like Gogo, you run the risk of them figuring out HOW to break the halters and get away, and because I worried that she would hurt herself whenever she set back (which was often), she always wore breakable halters. (I have about 20 broken halters in my trailer, just an an FYI.) When I got to Texas and was suddenly surrounded by horses who all tied like perfect little angels to anything anywhere, I realized how helpful it is to have a horse that understands and responds appropriately to pressure. I decided at that point that I wanted MY horses to tie too, and taught them all how. All of them tie like rocks, and if anything DOES spook them and cause them to set back (VERY rare), they always hit the end of the line and bounce back to where there is slack in the rope. You have NO idea how helpful this has been! WHY didn't I teach this to Gogo! 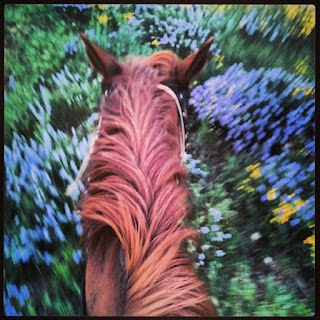 The wildflowers are unreal... thanks in part to the rain! It has been storming for about 3 days here, with today finally being sunny enough to dry things out. I'm not complaining, as it softens up the rock hard ground and makes the grass grow, but the mud is a little bit annoying. (Thankfully it is also short-lived... the girls were standing in ankle-deep mud this morning, and by this afternoon it has firmed up enough to ride. Awesome!)

Spring is AWESOME
Posted by Andrea at 9:01 PM