May in Texas brings thunderstorms, humidity, and HEAT. As spring turns to summer the thunderstorms and the humidity will go away, but the temperature will only get hotter. I can deal with the heat fairly well, but when you add humidity to it I feel like I am drowning every time that I am outside. If you need a machete to cut through the air in front of you when you step out the door? It's too humid. If you need scuba gear to get your barn chores done? Too humid.

The forecast for the weekend has been temps in the upper 90's with thick, sweltering humidity. What to do when you're working and you want to ride, but by the time you get out of work it will be almost 100 degrees? Get up at the buttcrack of dawn, of course! 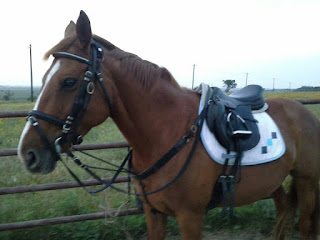 But she got over it. It was our first conditioning hack, and her first time in the jump saddle. This conditioning day will eventually turn into our once weekly 2-hour walk hack with a 25 minute trot session, but we're a long way from that. We started with 10 minutes of walk, followed by 10 minutes of trot, and ended with 10 more minutes of walk for a total of 30 minutes. Next week we'll do 45 minutes total, with 30 of walk total and 15 of trot. And up and up from there, etc. 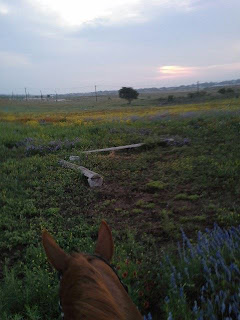 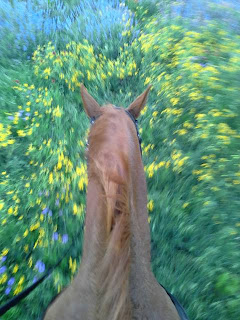 Trippy flowers in the early dawn light!! It was beautiful and a very pleasant 75 degrees. O broke a sweat, as she usually does, and near the end of her trotwork she was getting a little uppity - I had been working her on a loose contact, but she started giving me some attitude and kept trying to canter, so I gave her a contact and put her to work (she was not amused). She also trotted over a number of poles, and did well, but also wanted to canter. They were not set as canter poles so she knocked a few of them around, but that's all right. She worked hard, and I was very pleased with her.

Today I figured she would be at least a little tired, but I was very wrong. She had nothing but GO in her! The fitter and stronger she gets, the easier she finds work, and the faster she rebounds. It was broiling when I got to the barn after work (alas, I awoke late and couldn't work them in the early morning), but I figured we'd just do a light lunge and be done with it. She had other ideas, and powered along at about a thousand miles an hour for a rather extended period of time. 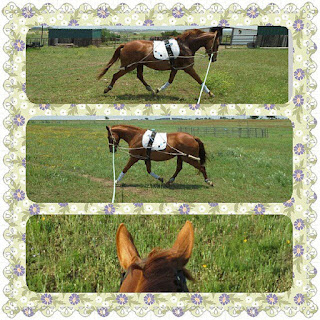 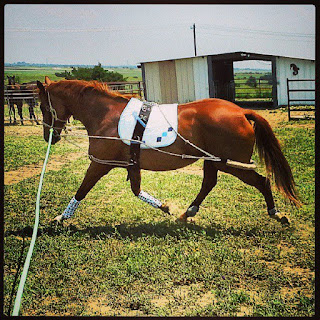 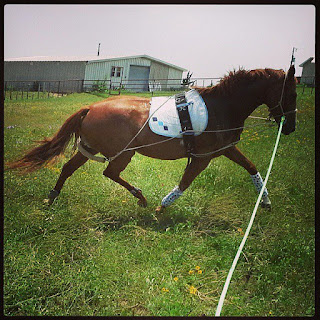 There's even a little video of her bounding along. You can tell the Faux-ssoa doesn't do much, it just gives her a boundary to work within. At the canter, it doesn't do much for her - she is unbalanced and likes to motorbike around the circle with her shoulder in and her head to the outside as a counterbalance. That will be fixed with under saddle work - not much I can do on the lunge, as I'm not one to crank her head in tighter than it already is. When she rushes, her walk and canter get flat and lateral, but I am seeing improvements there already... they're better than I thought they were! I think with time that canter will become much more pure and uphill.

I will have an update on Immy shortly... I haven't been writing much about her simply because I haven't hardly touched her in three weeks! She's been getting some R&R to let her chill out a little... I put her on the lunge today and she was quiet as a lamb. Here's hoping it helped!
Posted by Andrea at 8:38 PM