Ughhhh. I am so over summer. All of my northern friends are going on about how lovely and brisk the weather has been, making me long for the crispness of the New England autumn that I used to know and love. Fall in Texas mostly just sucks.... no pretty colors, no wonderful crisp chill, no brilliant blue sky, no scarves and coats and boots and gloves, no pumpkin spice anything. The ONLY good thing about impending fall is that maybe, if we're lucky, the temperatures will lower into the 80's by the end of the month.. but that's mostly just wishful thinking. It was still 100+ degrees today, has been 100+ degrees all week, and looks like it will continue to be 100+ degrees for at least the next few weeks.

What is the major problem with it still being 100 degrees at this time of year? It is no longer possible for me to get up and ride before it is time to head off to work - it is too dark in the early mornings. That means I have to ride in the blazing heat every day, and some days I just don't even have time to ride at all. Being able to organize my own schedule generally means that I avoid that situation - I slot in riding time every day if at all possible, or at least enough time for a good grooming session at mealtimes - but time with the business unfortunately has to trump time in the saddle some days. This week I didn't get to log the saddle time that I had wanted, but I still managed to squeeze in a few very productive and very awesome rides. Part of the challenge of building a business is also building in proper time for myself - something I'll be working on harder from now on for sure.

A few very great flatwork sessions have left me really feeling like O is finally really understanding what a half-halt is for. As she gets stronger, she is starting to balance herself from front to back better, and can rate herself reasonably well. Her old habit was to go as fast as she possibly could, then slow down, then speed up, go sideways, raise her head, root as hard as she could, bolt off, stop responding to leg or rein aids, and so on. Part of it was sheer belligerence and a "can't make me" attitude, but the other part was that she was truthfully just totally unbalanced, and found it easier to plow along on her forehand, snowballing faster and faster out of control, rather than take some responsibility for her hiney and actually use it. Now, she is finally getting to the point where she takes a half-halt and stretches out to the contact further with each one, rating herself and becoming more balanced from front to back. She isn't totally balanced 100% of the time of course, but she is really starting to get it. She always starts out speeding along, but she generally winds down in short order and gets to work. One of the nice things about her is the fact that she comes out the same every single day, no matter if she has worked her tail off the day before or done nothing for a few days. She is simple in that while she is hot to start out, you can just hop right on no matter where you are and walk off on a long rein. You always know that she is going to be the same, no matter where she is.

Such was the case today as well - we headed out to Curragh for another XC school! Curragh is an equestrian center that is only 10 minutes down the road from us, which is super nice. They have a whole XC course through Training as well as a little separate Elementary course that is in a fenced off area all by itself (that's obviously not me riding but you can see what the little course looks like). It is perfect for a green horse - it is small, fully fenced in, and with just enough interesting stuff on course to give a green horse good exposure without frightening it. There is a little log on a hill, a tiny little brush, a little painted house, and a tiny ditch, along with several other small jumps. My goal for the day was to get O around the Elementary course in full, all pieced together - her first 'real' XC course!
I decided for the day to switch up her bit, and went with a Happy Mouth mullen mouth pelham. She is going like gangbusters in her Happy Mouth mullen mouth eggbutt on the flat, so I decided to give the pelham a try. With the pelham, I can ride off the snaffle until I need a little 'excuse me hello' from the curb, and I already knew she loved the mouthpiece before I even put it in, so it was well worth a try. I wasn't disappointed by my choice - she LOVED it! I had plenty of control when I needed it, and was able to loosen up my curb rein and do some proper flatwork as well. Don't laugh at me, but I did use a flash with the pelham... and my curb rein had martingale stops, just because I didn't have another pair of reins around that didn't have them!! (For the most part, you all know that I am strict about proper equipment and etiquette... but I broke my rule for this one!)

Even with her few little green mistakes (hmmm, that house is kind of funny looking... should I stop? No? Well, ok, I will walk over it. That is a weird ditch, should I stop? No? Ok, let's go.), she was great. Rate-able, game, controlled and willing, she did the entire course twice without stopping, and once she had been over the ditch and the red house, she didn't look again. This horse is going to force me to be better over fences for sure... when I get everything perfect, she jumps very well, but when I don't give her enough freedom, she is quick to fling her head up and jump like a stag. It is up to me to be better for her sake!

After she jumped around the little course, we went out onto the bigger course with the rest of the group and hacked around for awhile. I let her stretch her legs and gallop on for a bit, then popped over a few of the smaller BN sized jumps without having her look at them beforehand. She even did a decent sized BN-N rolltop, although she did stop and look at it the first time. I probably could have legged her harder and gotten her over it the first time, but all she really needed to do was pause and think about it for a second, and then she popped over it twice more with no further problems. No need to rush at this point... better to let her think about it instead of force her to go and flail over it and scare herself. It was the biggest I've jumped her yet. We also cantered through the water a few times, and even jumped out of the water via a little bank - the first bank she has done. She was, uh... enthusiastic cantering into the water... meaning she basically took the last stride to launch herself in like Superwoman. We came cantering out to a round of applause by another group going by. 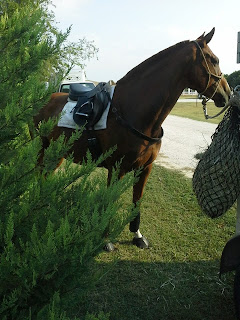 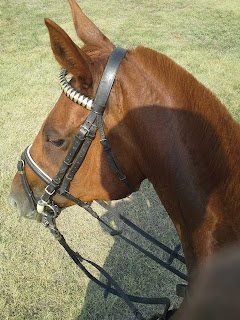 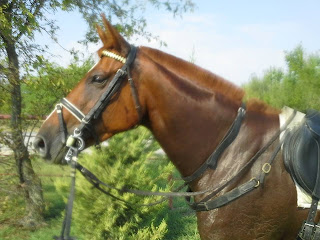 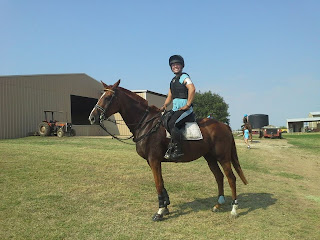 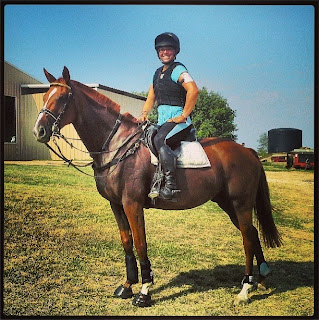