WOW did we ever have a grand entrance into the show world together! O's first show ever, and my first show in several years (since Gogo got injured!), and I couldn't have asked for better from her. She was just great.

We had a great school yesterday at one of the local barns that we trailered out to for S's lesson. We were supposed to trailer to WD to school, but there was a carriage rally (that we didn't know about until Friday night) going on for the weekend, so we had to change plans at the last second. We spent the morning instead at a place with a covered arena that neither of us had been to before, which was great since everything at the home barn was still totally underwater! O had one of those days when she just came right out and got to it, giving me some excellent and relaxed work. I kind of had expected her to be a fire-breathing monster given her earlier behavior - before we left the home barn, I had groomed her in her paddock and put on a brand new set of polos while she was still eating hay. I normally don't put polos on before the horse is in the crossties and ready to go, but I felt like being preemptive was a good thing, plus I wanted as usual to fill her up with hay before she went and bounced around on the trailer. She took that golden opportunity to wig out for no particular reason and take off galloping at high speed, bucking and leaping and flying around with mud slinging in every direction. So much for the new polos being so pretty and clean! I guess she must have gotten it out of her system before we got there, because she was perfect after that!

I was feeling good about the show going into it, not really expecting to score well but hoping that she would put in a respectably consistent and quiet set of tests. All I really wanted to do was go get some experience under her belt, and make it positive. It ended up being all of that and more!

Our first test was Intro A, which is absurdly easy on paper. Everything is a little bit trickier on a green horse though, so I wasn't about to take anything for granted! It wasn't all that long ago that she couldn't go on a 20 meter circle at all without bolting off, falling in, or trying to generally kill the both of us. Hell, we were lucky if we had brakes and steering half the time, much less anything else! This mare has really started to come around as of late - she is finally figuring out how to stay in a good relaxed rhythm, not fall in when we turn, bend properly, and listen and respond to independent aids. She used to use speed as an evasion, but she is learning how to balance herself and stay steady instead of bolt off the second she loses balance.

In Test A, she was perfect. She didn't have much in the way of impulsion, and had a few moments here and there where she got tired and hung on me hard, but I'd rather take the slower, not particularly engaged trot versus the running out of control trot that we had before, for the time being. Eventually she'll find the happy medium as she continues to get stronger, and will find it easier to carry her own head. And again, I'd rather take her being too heavy in the contact than backed off behind the bit or flinging her head in the air! I really wish I had more videos of her early rides... she used to be SO BAD!

We scored a 69.38%! The judge was particularly excited that I changed bend properly and complimented my understanding of riding O through her whole body, "because everything comes from this!" We scored several 7s, a few 6s, and one very exciting 9. The judge caught and commented on the times when she was losing energy, which I knew as well. Like I said before, I'd rather have not quite enough energy versus way too much energy at this point, so it's fine for the time being!


Test B went slightly less well from my perspective but scored better - a 73.13%! That's the second best score I've ever gotten! The judge was generous, but I think it was fair and warranted for Intro. We scored all 7s and 8s, and another 9 for our smart transition from trot to walk right in front of the camera. The judge remarked at the end that all of our halts were crooked - that's so my fault! I need to sit straighter and prepare her better, and I think a lot of improvements will come from that. Add some more impulsion as she gets stronger and more confident, and I think she'll be really good. Really really good, I hope!


She looks pretty darn nice in blue, don't you think? 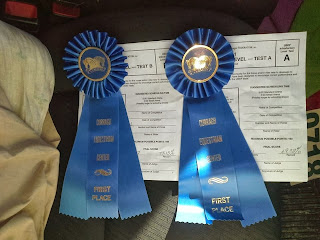 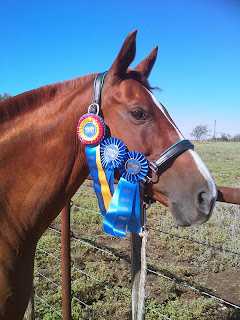 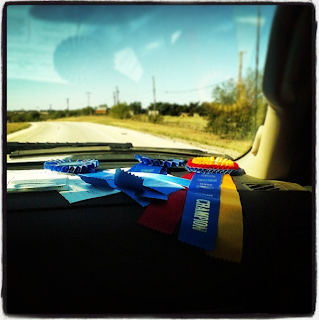 And yes, to top it all of we were the Intro division Champions!! That is my first ever Champion ribbon! I've won several Reserve Champion ribbons but never a Champion. That's awesome.

It's just a schooling show, of course, and it was just Intro... but I can't help but be excited for the future. We're hoping to do a schooling HT in about two weeks.... then we'll really be kicking things off!!