It's September!! That means that rain, cooler weather, and the fall show season are all on their way! It's actually thundering and pouring outside right now.... I can't remember the last time it rained. I love it! 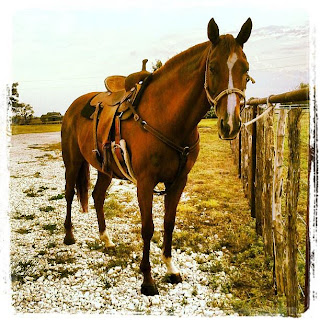 1) Continue basic dressage work - walk/trot/canter on the bit, emphasis on stretching and quietness, taking a contact solidly!
Success! I feel like this past month has finally started the turnaround for her in terms of really "getting" the idea of stretching out over her back and reaching out to take a contact. She's not there 100% of the time by any means, and we don't quite have the magic formula yet for how to get her there (it varies during rides, sometimes she is ready to stretch right off the bat and sometimes it takes an hour to get her there), but she is really getting it and we get to that point every single ride now. She has been doing the best in the famous blue bit, so well in fact that I decided to get another one exactly like it (except it isn't blue, sadly!) so that I could put it on her dressage bridle and keep riding her in the blue bit with the western bridle (it ties with latigo instead of a buckle so it's a pain to undo and put on to another bridle) whenever I choose to put western tack on her. I've been riding A LOT with the barrel saddle... dunno why, but we've been getting some great work done in that. I think she really likes the distribution of weight over a large area, but she also does very well in the dressage saddle... mostly I have been lazy and not wanting to change out of my jeans into my britches! She no longer rides in the neck stretcher or the martingale or any of the bigger bits that I had been playing around with - everything has been just in a simple snaffle, except for the slow twist when we go out schooling XC off property. S has a short shank pelham with the same Happy Mouth mullen mouth mouthpiece (how many times can I say mouth in one phrase?), which I think would be great to try - it's a mouthpiece she loves and I can ride her off the snaffle until I need a little extra in the way of braking with the curb. I just need to practice holding two sets of reins again.... it's been a LONG time since I needed two sets of reins for anything!

2) Jump schooling - work on gymnastics, small courses, things in the arena - just getting her rolling, quiet and confident! Also go to some XC schools, but keep it low key!
Success! Since she did end up getting a nice two-week vacation, we didn't jump nearly as much as I thought we would, but for the time that she was working she had some great jump schools. She jumped around XC at Greenwood like a champ, even handling some slightly bigger fences with no issues. (Meaning like, BN fences.... but that's a start!) Her most recent jump school had her jumping a one stride and a three stride line, a few verticals, and even some canter fences. Aside from still not having the greatest brakes when she gets hot, she is really doing well. We have more XC and jump schools in our near future!

3) Keep to our monthly calendar!
I'd call it a partway success - I did opt to give her that vacation instead of keep grilling her with the schedule I had set up. But it was the right thing to do and she deserved it - I believe in taking brakes to mentally and physically chill out before and after important training/showing events!

4) Continue to dork around with hoof protection options - how best to help this mare with traction and comfort!
Success! It has really just been in the past month that she has really started to get comfortable on rougher terrain without any protection. I ride her now without boots just as much as I ride her with them - the positive changes in feet have been absolutely incredible. She is now outfitted with Cavallos all around, Simples up front and Sports behind, but honestly I have mostly just either been riding with only the Simples/Sports up front sometimes and barefoot the rest of the time. The Simples don't rub her at ALL (scored them used for cheapo so they were already broken in) which is great, as they fit best without the pastern wraps. They are slightly heavier than the Sports, but both are lighter than a set of steel shoes anyway so there you are! It has only really been a few months of change, so everything should continue to just keep getting better and better and better from here! 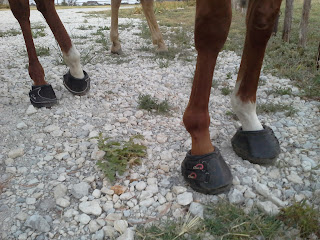 5) Keep playing with barrels, and conditioning work.... because you never know, maybe we'll play around with some limited distance stuff and some barrels too ;)
We did some of this stuff, not as much as we could have, but I spent most of my time focusing on dressage/jumping things instead... that is what is in the immediate future after all! We'll play around with this more when we have some more downtime, but now is the time to focus on the upcoming tasks at hand.


Our September goals are largely the same, with a few big additions....

1) Continue basic dressage work - walk/trot/canter on the bit, emphasis on stretching and quietness, taking a contact solidly! As always a work in progress!
2) Jump schooling - work on gymnastics, small courses, cantering fences, slightly bigger fences and more XC schoolings!
3) Keep to our monthly calendar!
4) Get organized - what do I need for showing? Dust off show clothes/tack and inspect everything!
5) Survive our first schooling show! Get through with a good positive experience no matter what the score!


Yes, that's right! September brings OUR FIRST SHOW! This will be the first time I have set foot in a show ring as a competitor since our ill-fated AECs in 2009. I feel completely out of the loop and like a total noob. We're going to go XC schooling at Curragh on the 7th but we're not going to show there on the 8th - there is a show on the 22nd at Lazy Dog that is smaller and is probably a better first one to shoot for. The Curragh show has a w-t-c test and a longer/bigger elementary course than the Lazy Dog show does (tiny, shorter, w-t only test). There is another Curragh show next month that we'll shoot for instead, but this month we'll keep it simple and small.

It's still raining.... a perfect day to relax and figure out exactly what needs to be done to prep for showing later in the month!!