Uh oh. We have a minor problem on our hands. Next Sunday is our FIRST EVER EVENT! It's just a little tiny schooling show, but hey, we gotta start somewhere! She has already jumped around the entire little XC course that we'll be doing, although we will definitely school it again the day before, and she's also good and game over pretty much every stadium fence I've pointed her at (simple things, obviously... she might think differently when they get more complicated!). So what's the problem here?

Well, I guess that's not entirely true... we CAN canter, and gallop, and do both all the time... but to do it in a respectable dressage-y manner? Not so much. We've spent a LOT of time doing simple walk-trot stuff, but mostly I've just let her canter when it felt right or when we were jumping, as her balance permitted. She was such a runaway freight train that cantering up until now has just been TOTALLY out of the question - if you can't stop a horse when they're trotting, you sure aren't going to be able to stop them when they are cantering! Up until recently, she was still having moments where she would bolt off in the trot at high speed with no steering or brakes, so I felt that she just wasn't ready for canterwork. Now that her walk-trot work is really coming together and she has really become fairly quiet and relaxed, it is time to start adding canterwork. Unfortunately for us, our test this weekend has canterwork in it... and we're definitely not ready yet. She will be ready, it won't take *too* much time.... but she's not quite there yet.

She's funny in that she doesn't really know the proper dressage-y cues for canter, as far as I can tell. If you lean at her over whichever particular shoulder you want your lead to be on and kiss at her, she'll usually pop up into the canter. If you half-halt, sit down, and cue her, she explodes forward with her head in your lap, and goes zooming off in every direction. Good luck with the lead, you have a 50% chance of getting the right one! I'll have to do some experimenting this week to see if I can sort of fake it for the test, but usually when she gets cantering, she gets that zooming, churning, grunty-snorting, dirtbiking thing going on that is definitely accentuated on a circle. This week I am jam-packed at work, and the sun is going down a LOT earlier than it used to, so we'll see how much *real* dressage time I get.... it should be, uh, interesting this weekend in the test!

I had a blast at the AECs this weekend, and had a ton of fun cheering on old and new friends, but it was back to the grind today! I was going to trailer up to WD to do some dressage work, but it was so gorgeous this morning that I was craving a trail ride... but I needed to do dressage..... but I wanted to trail ride.... oh what to do!

I decided to compromise and do both at the same time. Hey, why not? Dressage is where you make it! 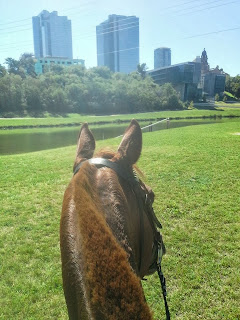 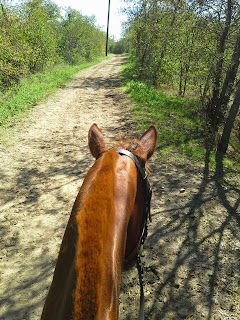 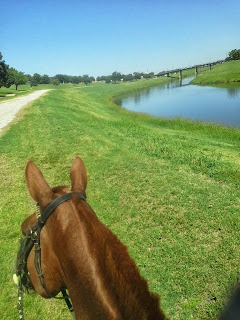 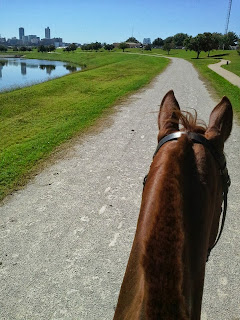 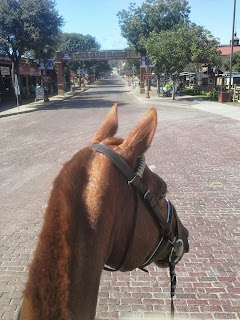 Those of you familiar with Fort Worth will recognize both the skyline and the Stockyards! O was a little bundle of jumpy nerves for most of the ride, although I can't blame her - it's a pretty scary set of trails. She didn't do anything wrong, but she was quick to start at everything that moved or didn't move (AHH a squirrel! AHH a bag! AHH a guy! AHH water! AHH a car! AHH a rock!). Once we set in to do our flatwork, she was pretty good in the walk and trot, but the canter was pretty messy, as expected. The more canterwork you do, the hotter she gets, so it's kind of a delicate process.... well, we'll get there!

I'm getting excited though... we're less than a week away from our first event!