Dylan has been here for four days now, and he is starting to settle into the routine. Getting to know him more has been a really interesting experience so far - he is such a sensitive, smart, interesting character. He might be the smartest horse I've ever met in my life - even smarter than P, who I've always said was steal-your-credit-cards-run-for-the-border kind of smart. Dylan is even smarter. I swear he has counted and catalogued all of the mares, and personally keeps a tally on each and every one of them from across the way in his field.

He is also re-learning how to Horse. When he lived with K in New Mexico, he lived outside 24/7 and was quiet and good. When he moved to SC and was with the trainer, they primarily kept him in a stall and he started fencewalking. He is absolutely hands-down the worst fencewalker I have ever seen - I think he walked for 24 hours nonstop when he first got here. He would take a bite of hay and walk, and take a bite of hay and walk. He just would NOT stop. He walked, and walked, and walked. The second day, he stopped for awhile and ate, and then kept walking. The third day, I started him on ulcer meds - I just had that feeling. I'd say his fencewalking has been cut down about 70% since then - he does still walk at times, but it primarily seems to be when something is going on, like when I am in doing something with the mares, or when I am getting food/hay/doing stuff around. It's like his anxiety level manifests in itchy feet - he just needs to move and move. When he is quiet, he is still. But when he gets anxious/anticipatory he gets going.

Today, for the first time since he got here, I saw him grazing and lounging under the trees. The fencewalking is drastically down, which is great - the trainer had since told me that he apparently walked 100% of the time in his turnout in SC, so I am super happy to have gotten him to cut a large portion of it out. I think he will always default to it, kind of in the way that O does when put in a situation that worries her. It would be nice if Dylan could have a friend, but he is a 14 year old stallion who has been solo his whole life - there's not any way really to safely do that, though we wish we could. We are pretty optimistic that as he settles in, and especially gets back to work, that the fencewalking will just be mostly a memory.

He is PIG PEN. It is hot right now, and he is sweating quite a lot and then rolling a million times in the dirt, so he has been hosed every day. I've played Hair Therapy with him a bit too, which he has tolerated with some vague annoyance. He is a total spaz about spray bottles, which K told me about, but I did manage to spritz his hair down with detangler. He is also spazzy about water near his head, and having his ears touched. Basically he has several little funny quirks to be mindful of!,His tail needs a good wash too, but I have detangled it and oo'd and aah'd over the thickness of it. It is SO GORGEOUS. 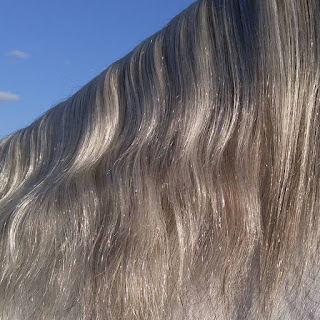 It is stupidly hot outside, and I have been really sick this week, so I think he will probably have another week or week and a half off before I get on him. I want more weight on him, and I want him to be settled and get to know me better before we work together. He is suspicious of new people, and while he has been good about getting caught, I think he is eyeing me and sizing my personality up. He wants to know what I am all about.

This is what makes stallions so interesting though. Dylan is bold, and strong, and very, very macho. He has a high opinion of himself, and he wants things cut and dried. I'm only just getting to know him, but I have a feeling that more and more layers of him will unfold. He is a very complicated guy and he wants to be seen and respected as such. Once you get through to a stallion - once you get them on your side - there's nothing you can't do.