I've Got The Power

After our preliminary test-the-gears ride on Saturday this past weekend, I gave Dylan a couple of days to relax and continue his acclimation to being barefoot again (and to give my poor, poor thighs a chance to recover). I've been back on him twice now, once on Tuesday and once yesterday. I've forgotten just how much I missed saddle time... how much riding is really a part of everything about me. I had forgotten. I had accepted it. But it was still in there, underneath it all, waiting for the right time to resurface.

Dylan is a super horse for me. We get along well, and he also knows exactly what he is doing, so if you're not sitting the right way he just isn't going to do what you want. I have a good knowledge of dressage by now, after doing it for more than half my life, but he still knows far more than I do. I defer to that, and when he isn't doing what I am asking, I know it isn't because he doesn't know how to do it. It's because I am not sitting the right way. I haven't been in a dressage saddle much in the past few years - I think the last time I was seriously riding a couple horses every day was 2011. I rode O a lot in the beginning of our relationship, but it was not great going and I picked up a lot of defensive mechanisms from it that I didn't realize. As a driving horse, O is supurb. Top hole. Exquisite. She is just great. But under saddle.... not so much. I had forgotten what it is like to get on a horse that doesn't scoot off at top speed the second you put your leg on.

It it simultaneously really hard and super easy to swing a leg back over and go off to ride after not being in the saddle for years. I feel like a sack of potatoes, and then a lump of jelly, and then a bag of sand, and then a wacky waving inflatable arm flailing tube man. Then I get it together for a minute, and everything works properly. Then I tip forward and have to remember to sit up again, or I get my leg a bit out in front of me and have to put it back. I never used to do this - I think it is a combo of riding defensively, and not having much riding body strength. The good thing is - I know when I start to slide into these things, and I can right them again. I default to them, but I recognize them and can put them back. I just have to keep doing it over.... and over... and over again.

So, in the next few months, you will probably see a LOT of pictures of me in some variation of tipping forward/rounding shoulders/leg swinging forward. But, as time goes on, I think they will all straighten themselves out, once I can convince my body that I am on a horse who is not going to bolt out from underneath me. 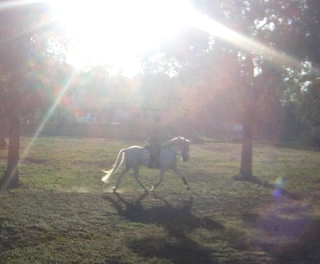 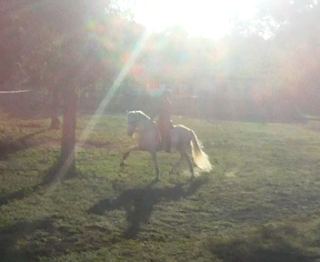 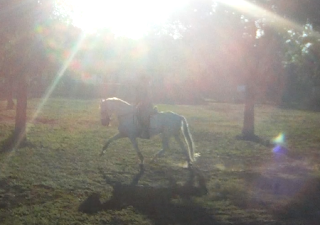 Once more thing about Dylan is his mouth. He never shuts it. He does this while lunging and while being ridden, so I know it's not just me. He rolls his tongue around, snatches for the bit, clacks his mouth, and basically spends his entire time with it wide open. The trainer told me all of these things in advance when I spoke with her on the phone - in fact, she told me not to think that he was lame, he's just bobbing his head being snatchy for the bit. It's hard to say whether or not he just does this when he's not connected through his back, or because he isn't a huge fan of the bit. During that ride, once I got him up and going forward he stopped, so that may be my answer right there. The dentist will be here in a few weeks, so she is going to look him over and see what she can find in there, although I think his teeth were done not that long ago.

I thought it would be interesting to try a bitless on him, just for kicks. K wants to ride him bitless when she gets him back too. A client of mine was kind enough to let me try an LG bridle (the wording on the website is a bit off, it's translated poorly from German). I've heard lots of good things about them - I was a little skeptical, as I have not found ANY model of bitless before that I liked, and much prefer my plane jane Happy Mouth mullen mouth eggbutt. (I did lunge Dylan in this bit and he did the same behaviors). O doesn't tolerate bitless either... at all. I don't even know that she would tolerate the LG... I'm not really interested in trying to find out either. I know the horse well enough to accept that her very specific Happy Mouth is the only bit she will ever, ever accept. I can't fault her for having her priorities!

I got on him yesterday morning with the LG. The first 10 minutes, I felt like I had made a mistake. He was confused, upset, and wouldn't stop backing. He is super sensitive about his nosey (maybe I will put a fleece on), At some point, he finally went forward.

And then... he was great. Super! No fuss with the mouth, no nothing. He actually stretched, took a contact, and off he went. It felt like riding with a snaffle. It was cool! 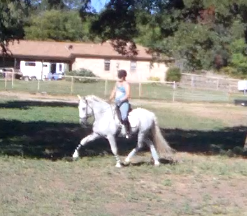 I think I will keep playing around with the bitless for awhile, but not exclusively. I am a pretty firm believer that good riding = good riding = good riding, and the equipment is secondary to it. A good horse can be trained to go in most anything. Bitless is not dressage legal, so we're not exactly tossing the bits away. But this was definitely a good experiment and I liked the results.