I didn't think these actually existed anywhere! Apparently, because I am a really bad club member I haven't actually logged into the club website in the last.... uh.... well, ever, I don't think, not since they updated the website. I'm not very good at being active in clubs to begin with, so I guess it's not really surprising, but I bothered to log in and check today to see what the final standing for year-end points was. We finished third for the year on the points list, which is not bad, especially considering the fact that we just outright sucked at one of the shows. To really be competitive for the Horse of the Year award, you have to attend every show and place highly at every show. I lost my chance after the Romp. Ah well - it's a new year after all! A fresh new chance to whoop some booty!

It has taken me literal hours to get these few photos downloaded. Our internet SUCKS right now. I don't know why it has been running *extra* slow lately, but it is driving me nuts. It shouldn't take 10-15 minutes to load a single page. The really annoying thing is that there is nothing we can do - satellite internet is literally the only thing we can get out here for the time being.

Anyway! They're not the best pictures but some of them are pretty great! We were the division Champions at this show - a great way to close out the season. 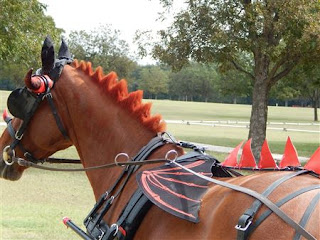 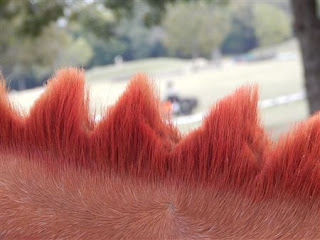 If you alter and zoom, you can get some pretty great pictures!