Ramping Up Into January

I'm pleased with how January is going so far. I've been really trying to make sure I stick to a schedule with all the animals, and get all of their planned things done during the week. At the holidays, I often fall waaaaaaaaaay behind on getting everyone worked and done, and that happened this year as well - everyone has a couple of weeks off while I scrambled around trying to get everything sorted for Christmas. Now that we're back into the thick of things, I'm getting everything I need to get done actually done! This update will cover the non-riding critters, as they were the ones who got worked yesterday and today. 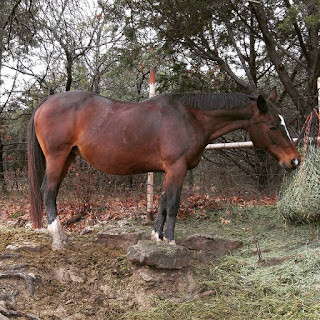 The old ladies got groomed yesterday - it was the first time in about a week that they've been out from under their blankets. It's been cold and rainy and gross here for ages, and it's supposed to tank again tonight, but for the past two days the mares have been able to be nekkid. Pmare is turning 20 this year, and I think she looks pretty great for still nursing a giant 8.5 month old AND only eating hay.

Speaking of the 8.5 month old:

I measured her today and she is 13.2 at the wither. She just seems so HUGE all of a sudden. When did she get so huge??

Lendri and Uma both got worked with today as well - Lendri gets the gold star for the day. She has been extremely skittish and standoffish, but now is starting to get friendlier. Today I was able to catch her easily, groom her, and even pick up all four feet. The last time I worked with her, she would leap away when you'd go to touch her legs, so this is a huge improvement. I don't know if she knew how to pick her feet up before - seems like maybe she did - but either way she is clearly getting more comfortable with me and is responding well to handling. She also leads well, which is super, because Zuul is *not* leading well at the moment - so at least one of them is. 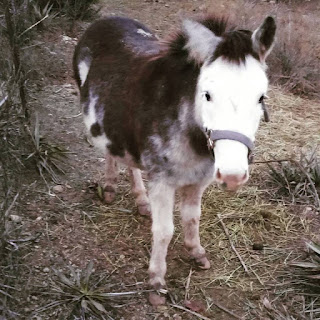 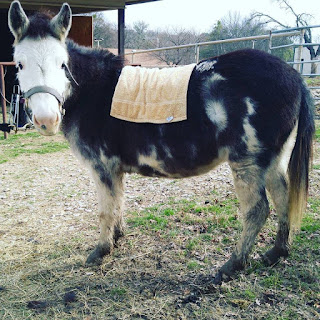 I'm really unhappy to report that Zuul seems to have a particularly bad habit - he bolts when leading. If I had to guess, I'd say this is probably the reason he was dumped at the auction barn. He leads fine in his pen, and he ties fine. BUT, going outside of his pen, he leads fine for a little while, and then will randomly fold himself in half and just explode off in the other direction. There is no stopping him. He did it in a regular halter, a rope halter, and a halter with a stud chain - nothing stops him. This is a huge issue because he clearly knows what he is doing, and knows that if he just runs as hard as he can, he'll get away. He doesn't seem to care that he'll then run around with a lead rope and chain still attached, stepping on the lead rope and shanking himself in the face over and over. What a bummer... he was doing so well too. I was admittedly wondering if something was going to come up somewhere - there had to be SOME reason he was dumped - but I was so glad that nothing of the sort had happened so far. Well... now we really do have a major problem. I *may* be able to get him so that he can lead safely, but I don't honestly know that he'll ever be trustworthy again. Apparently, according to my sources, this is a really common thing for zebras and their hybrids to do, and even the tamest ones will try it. Ah well.... we'll do what we can. I have a Be Nice halter ordered, and we have some ideas for training - but if anyone has any other ideas, please feel free to share them. Remember that zonkeys are not horses, and they don't respond to the typical stuff that horses respond to.

I tried that halter on Pax today too - it's way too big for her but it won't be for much longer. It only just fits Zuul - it's a yearling size halter. Considering the fact that he's only maybe 11 hands, and she's nearly 14 hands, I find that adorably funny.