Saturday dawned bright and early - and thankfully sunny. Unfortunately, it was also ridiculously hot and humid. Like, REALLY hot and humid. We got to the showgrounds around 7, where we when cleaned O's stall, fed her, refreshed her water, and took her for a walk. It was early, and we weren't properly caffeinated yet, not to mention the fact that it felt like we were drowning in the swampy air.


I walked the cones course again a few more times. It wasn't a terribly flowy course - you would be going along and then suddenly have to do a literal rollback or  tight 180 to get to the next set of cones. The course went like this, with a few minor changes: 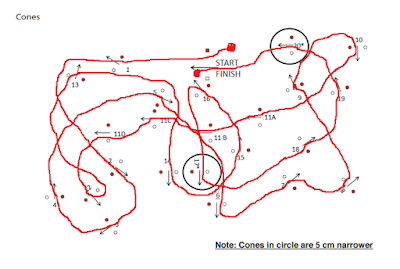 And yes, two of those are "skinnies" like in jumpers/eventing - they are 5 cms narrower. It's already pretty tight as it is! Not to mention the entire course was TOTALLY underwater.

We readied for dressage, and off we went. O was a little resistant for the first couple of minutes, but then she settled right in. The one thing she would not do - she would not stop to rest. I tried several times to just take a nice walk break, and while she would walk for a bit, she always jumped back into into the trot when she was done with that. If we were at home we would be discussing that, but when trying to keep O quiet and sensible during a warmup... well, you don't push your luck. You don't pick a fight. If she wants to trot, well then we trot. Some old ladies were tittering to B2 about how I needed to force her to walk because it was for her own good, and B2 had to be like, you don't understand. There is no forcing that horse.

So, we trotted. And it paid off. Once in the arena for our dressage test, O put out a really solid performance. There were things that need work - she wasn't terribly forward, and her walk work was kind of eh, but she didn't put a foot wrong and she was extremely obedient. Especially compared to Sunrise Ridge, which was just a disaster, it was an exceptional test. The scoring was extremely tough - there were two judges and there were nearly always at least 20 points between their judging methods, people were scoring 80s from one judge and 60s from the other. (It's more like eventing dressage in that you get points versus percentages, but where an eventing dressage test is good if it is in the 30s, a driven dressage test is good if it is in the 50s. 40s is exceptional. 60s is kind of okay, 70s and 80s are not good. And someone did score in the 90s!

We were in 3rd after dressage, right behind a fancy Friesian. It's kind of hard to compete against that kind of mover, although the one judge did place me ahead of her. The first place person was the same one that beat us at Sunrise Ridge (and she will beat us again in Oklahoma), but her test was scored 10 points harder than it was at Sunrise Ridge, and it was a nearly idential performance because that horse is basically perfect. So, I imagine if the scoring was 10 points harsher at this show, then I did pretty well! Our score was a 61.72, which sounds horrible on paper, but I really thought it was a good test for O. I was happy with it. 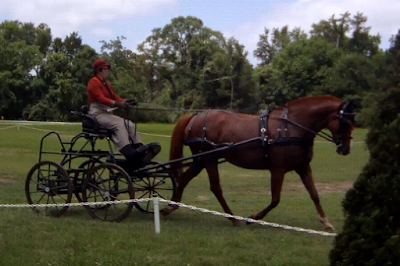 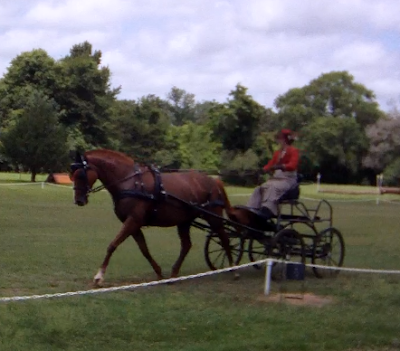 From the dressage, we went right over to cones. I really enjoy cones, and the mare does very well at them, but at these bigger shows the clearance is set tight, 30-35cms. That sounds like a lot of space, but it's really only about 11-13 inches of space. Split that in half, and it's about 6 inches on either side of your wheels. And you're going fast, and turning, and trying to remember where you're going, and accommodating for terrain at the same time. For a rookie like me who is still learning how to gauge where I need to be in order to not murder the cones, it's tricky.

But because O was right with me for her dressage test, she was right with me for the cones. She was wonderful. We had our first ever clean cones! We've always had knockdowns before but this was the first time with no knockdowns. We also only got 0.7 time faults, for being just a hair slow due to the wet weather. This meant we won the cones in our division! Everyone else had knockdowns and time. This moved us up into 2nd place! 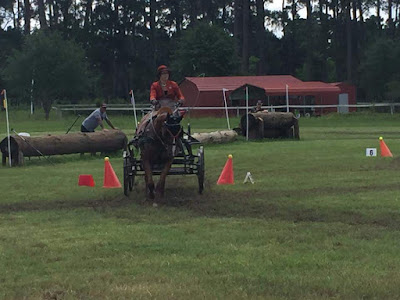 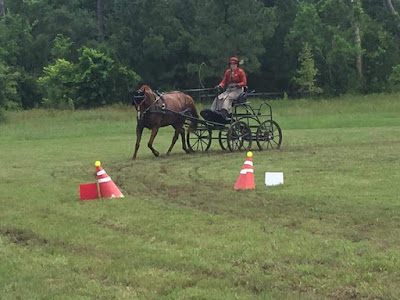 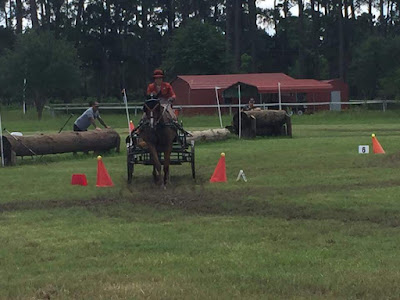 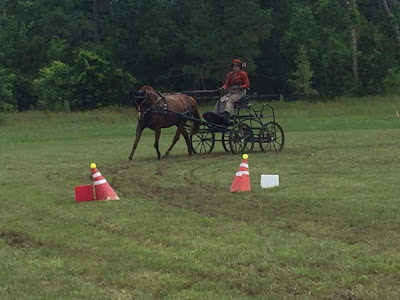 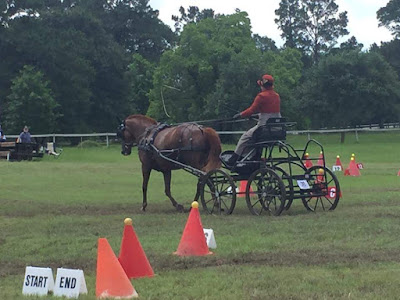 O was hot and breathing by the time we walked all the way back up the hill. Not surprising really - it was so steady and humid out, and she is not used to working in humidity. We cooled her out and took her for a graze. About this time, people started wandering by and asking about her. I've talked about some of the weird things people have said to me at these shows before, but it keeps surprising me that it keeps happening. Eventers aren't like that, or at least eventers on the east coast and midwest aren't like that. Texans tend to be super nosy anyway, so I can't really tell if it is due to being Texan or just because of the sport itself. I'm under the impression that people don't always know what to do with me or think of me when they see me roll into these shows. I'm young compared to them - half their age, or more than half their age - and I look kind of alternative. I have half a shaved head. I don't *look* like I should be at a carriage driving show with all of these old bats. I can't tell if they're just trying to make sure they're solidly dominant over me, or if they just think I'm a bother, but they aren't afraid to backhandedly comment on either myself and my looks, or on my horse. One of them told me she was pleased and surprised than I could "actually dress yourself properly like a lady" during the show, because I "looked so edgy, I didn't know what you were going to do! I thought oh no, what is that doing here!" Something to that effect. I tried to laugh and said what, did you think I was going to put spikes on all of my gear? And for a second I thought she was going to say yes, but she thought better of it. Another lady drove up to me in a golf cart, and started asking about O. I gave her the usual rundown of her history - that she was nuts, that she did not cut it as an eventer, but that it was easy to break her to drive. I told her from first long lining to first trotting down the road hitched to a cart was only two weeks, which of course is completely true. The look on her face could have peeled paint. Her jaw was slack, her nose was crinkled, and she looked at me like I was the most idiot bumpkin psycho she had ever seen. The only thing that she could get out of her mouth was, "well, THAT'S weird." I didn't know what to say to that, so I didn't say anything.

I do sometimes miss the north, when nobody cared about anybody else, so they didn't bother you. Texans just love to gossip and make everyone else's business into their own. They'll be there to help you out if you ask for it, but they'll whisper about you when you turn around. It's been a little hard for me to understand.

Following lunch at a local Mexican restaurant, we had a competitor's meeting at 3pm about the marathon. The organizer felt that the course had improved enough to run the marathon in the morning, but they were moving the start back a hour. They were hoping it would continue to dry over the day. B2 and I went out to walk the first part of the course, which was all still total slop, and I almost heat stroked her out about 10 times. It was HOT. Thankfully, one of our friends came along in a golf cart and we were able to get her back to get some ice on herself and cool her temperature down.

O got a second bath at the end of the day with her magnesium shampoo, and we also had to go to the store to get electrolytes, which I had forgotten. I had no idea it was supposed to be SO hot and gross and humid all weekend. O usually doesn't like to eat her elytes, but theses ones had sugar in them (which I usually won't buy), but in this case, I figured it would help her actually finish them, and I was right.

We headed back to Gonorrheacrabs Inn for the evening and passed out... ready for the next day and the really fun stuff!