Once in awhile, I realize that I have a WHOLE bunch of photos that haven't been shared here because most of them don't have enough information to make into an actual blogpost. I don't always have a lot to write about, because some of my weeks would have entries like this: "Gave the stallion a few days off. He got really muddy. I groomed the babies. They wore bridles again, like they did last week. And nobody died." Not tremendously interesting.
So, instead... PHOTO DUMP!

Dylan and O are still the cutest couple around. Seriously. They're just gross.


It also apparently has become my mission in life to collect All The Zebra Things for Zu to wear. It's not easy to find zebra patterned stuff in pony size but I'm doing a good job so far!


Pax has been getting regular grooms as usual, but now she is starting to wear a bit. She has worn it probably 5 or 6 times now and bridling her is a non event - she opens her mouth and takes the bit, and unlike the mules I can just slip it over her ears without unbuckling the bridle. I will need to get a few more headstalls though... adjusting this one a million times for each baby (different bits, different settings) gets tedious. She is still plenty mouthy with it, but she is a mouthy baby in general. Next year I plan to show her in hand in the FEH, and two year olds are required to wear a bridle. So, bridle it is. 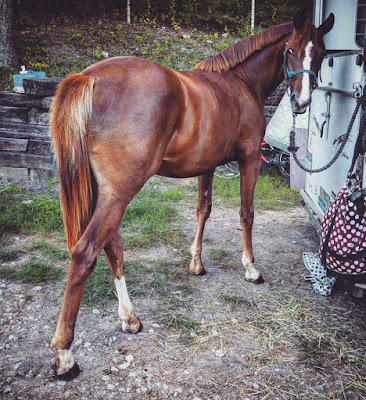 I haven't deliberately done a lot of in-hand work with her because she still has the mental capacity of a squirrel with ADHD, but I tested out some of her groundwork skills the other day to see what will need polishing. While she is still quick to play up when the other horses do something to encourage her (like Dylan and O who both go NUTS galloping and bucking whenever she appears), she seems to be slowly moving towards more mentally able to handle it. Eventually she'll be there but she is only 17 months old. I look at her and I wonder how anyone could consider starting 18 month old horses.... they're still so tiny and babyish to me.
Anyway. I tried out a few of the basic things I feel they need to know in hand, and was pleasantly surprised to find that she knows all of them and did them all well - stop, stand immobile, back up, and yield haunches to pressure on both sides without issue. It's all stuff I never deliberately taught her per se, but things she just picked up over time during formative handling. I know she also trots in hand because we have worked on that before, but as we get into the winter I'll be trailering her out again so we can work on this more in an arena away from home, and in a bridle as well.

Srirachy had quite the evening yesterday... She got trimmed, which is now a non-event, but I was wearing TERRIFYING GLOVES OF DEATH which scared her out of her wits when I touched her with my gloved hand. She's never smelled or seen or felt gloves before. Then she had to deal with Very Scary Future Hubs, who eventually convinced her that he could pet her neck and she would not die. So much to deal with! She also helped mow for a couple of minutes since our Lawn Boy didn't show up.

I ordered a mullen mouth butterfly bit that was measured to fit both of these littles, because I thought they would like a mullen and it was suggested to me as well. And.... that went over like a ton of bricks. I tried it on Sriracha but could tell she wasn't going to tolerate being lunged in it, so I took it off. I started to lunge Lendri in it, but she acted out violently and stuck her tongue over the bit and out the side of her mouth. She's never done that before. As it seems that mooles apparently have a hard enough time dealing with bits as it is, I went so far as to stop the session, switch back to the sweet iron snaffle, and continue on. She had no more problems, except for being extra sassy that day. Well there you are... no more butterfly bit for these two.

Even though the babies are doing their baby things.... there is always time for them to do the most important thing, PLAY! 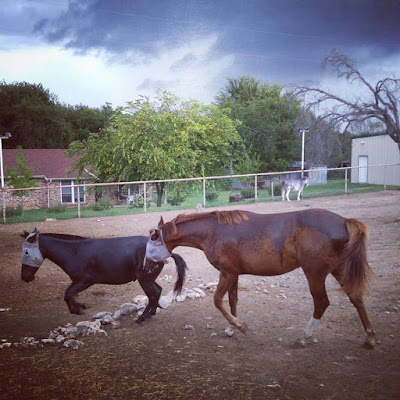 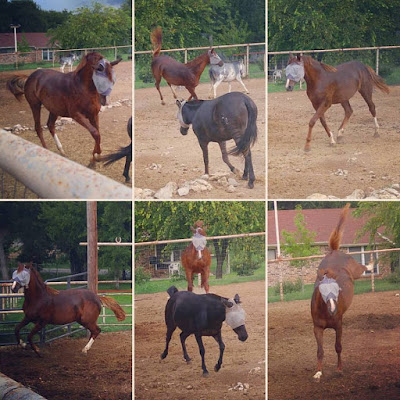 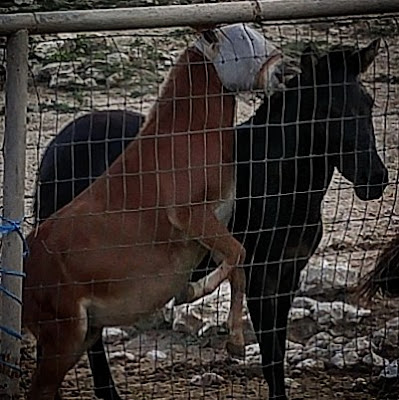