Working With A Zony

Working with zebra hybrids is an exciting and fascinating experience... it's definitely not something I'd recommend for everyone but I am having great fun with my Zu! 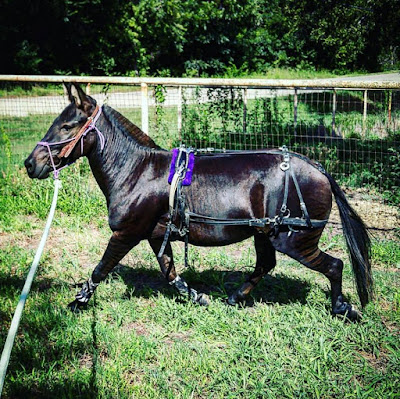 So, what's it like working with a zebroid? Well, it depends on a lot of things, as every one of them can be a little different.

I'm completely convinced that getting zebroids off to a good start as babies is the number one biggest thing you can do for them. They should be temperament bred if possible, but the biggest factor is impressing upon them at a very young age that humans are good and to be trusted. Then, you must work with them every. Single. Day. "Working with them" doesn't necessarily mean taking them out of their pen and working them. Working with them can mean nothing more than just having positive interactions with them every day, petting and scratching. Actually, I think that this is more important than anything else - taking them out and actually working them every day would probably turn one against you pretty quickly. But just as bad is not working with them at all - if they don't interact with people every day, they tend to revert back to their wild instincts. This was Zuul's problem - he lived out in a field as a stud for 7-8 years without much human interaction. Unfortunately, there comes a point when this is just not able to be reversed.

A lot of breeders will pull their zebra babies as neonates off of the mare and bottle raise them, in the hopes that this will create a better bond with humans. I personally don't believe in this, and there are numerous reports of babies turning into raging psychopaths once they reach maturity, especially sexual maturity. Zebras tend to mature later than horses, between 4-6 or so, so it can come as a huge shock when a sweet baby suddenly turns into an ultra aggressive animal. Anyone who has worked with orphaned foals can tell you that if they're not put in their place, they'll turn into monsters, so I don't know why anyone would want to do this with a wild animal!

What Zu's breeder does is keep all of her babies, including full zebra babies, on the mare. She only breeds animals that are friendly and tame enough to allow their babies to be handled, so that she can imprint on them and also let them learn herd manners. I personally think this is the best way to do it, but everyone has a different opinion on it.


Zebroids can be a really mixed bag in terms of personality. Zebras themselves have powerful wild instincts, and when they feel threatened, they are quick to bite, strike, kick, and attack. Crossing them with a domestic horse or donkey tempers that down quite a lot, but it is still there. Zu acts mostly like  a super intelligent pony, but sometimes he has some very strong zebra-like traits that come out during training.


As a two year old, Zu is basically going through the same program that the other babies go through, only with differences in approach. There is no zebra training manual out there - there is very little information to be found anywhere! - so I have to rely partly on everything I can get my hands on to read, partly on all of the zebroid experts I have access to, and partly on my own common sense. I am also learning as I go, because I am finding out that things that I expect to work don't always work.

Zu wears the harness with no issues, and has been wearing the bridle with only minor protest. He lunges in the roundpen, but he does not know how to lunge on a line very well. I have long lined him twice, and while it has gone fairly well, he still had moments of spinning around in the lines and getting confused. When lunging on the line, he pulls EXTREMELY hard in the direction of his herd, and tends to cut in on the other side of the circle. When he pulls hard enough, he stops and turns in to the circle. With a horse, it's easy enough to push them back out onto the circle and get them going again without pulling, but with Zu, the more he gets concerned about this the harder he pulls. It's a very zebra like trait to straighten his neck and brace against pressure, and he will escalate instead of figuring it out like the mules do. So, we backtrack to the very, very basics to make sure these are solidly in place before we add in things like long lining or more complicated lunging again


Currently, since I know he works fine with the harness and decently with the bridle, I've stripped these things off of him and gone back to making sure we can lunge without needing to hug the rail on the one side. He wants to be with his herd, so it's very important to me to make it clear to him that I am part of the herd and it's okay to stay with me. He'll be much less inclined to want to leave and go back to his friends if he counts me as one of them, so I try to make sure that above all else, we are buds. Going back to the very basics, we are working on lunging at a walk without pulling. These sessions are very short, and heavily rewarded for good behavior. The last thing he EVER needs to learn is how to pull and run off successfully. I have no doubt it will happen along the way in our rudimentary training, but it's something I want to make sure I avoid at all costs, and make sure it gets addressed if and when it does happen. The mules pull too, but they are so quick to figure it out and stop when it doesn't work. Zu is not that way, and steady pressure is not something he responds to well at all. Rhythmic pressure and release is the only way to go with him.
Basically, every little rudimentary thing needs to be gone over with a fine toothed comb. If there is any question about something, it needs to be addressed immediately. I can't assume that he'll figure it out like a horse would, so I have to stop, break it down into tiny little pieces for him, let him digest those pieces, and then add into tiny crumbs of information until eventually, gradually, we get to an entire piece of pie. But we have to go over the crumbs first, which is not something I would have to do with a horse.


The more he is here, the more his hilarious personality comes out. He is a total clown and a jester, and loves to play with the mules and with Pax. He is more mule-like in his play in that he goes for the legs of the others, and drops to his knees to avoid them biting his in return. He likes to wrap his neck over Uma's and squash her, and she in return likes to rear up and bite him in the crest. Pax is the most common recipient of the leg-biting I think due to her height, which confuses her to no end.


What is most important above all, especially at this stage in our relationship, is that every day he gets even friendlier with me. He outright ran to me today and lept off the rock ledge to come to me. Yesterday he grabbed Pax's halter and went to the gate, like he wanted to be played with too. It's anthropomorphizing, yes, but I don't know too many hybrid equines that will see a halter and voluntarily come over for attention. 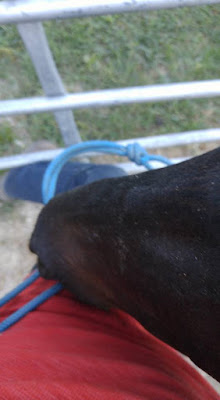 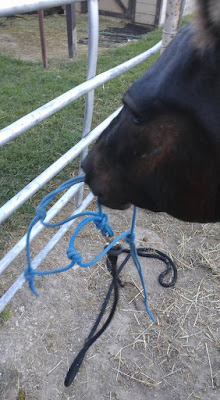 It may take me twice as long to get him safely broke to harness - three times as long maybe - than it would a horse. And that's okay, because he's worth it! Taking the time it takes is always worth it to me.

Email ThisBlogThis!Share to TwitterShare to FacebookShare to Pinterest
Labels: behavior