My dentist comes in from Maryland a few times a year to do client rounds in Texas. Dylan, O, and of course Big Frank were due, so I got onto the rotation. Naturally, the day she was scheduled to come out, we had a cold front come whipping in, which dropped the temperatures to near freezing. The day before had been in the 70's - this is Mother Nature's favorite winter punch-in-the-gut for Texas. Obviously there is no rescheduling when your dentist comes in from out of state, so she showed up at 8am and we got to work!

Both Dylan and O didn't have a lot to do, which was nice. O has been done by this dentist for a couple of years now, and I've been really happy her level of care. Plus, O stands perfectly still without sedation and is quite happy to have her teeth done, which is really something considering her personality! Dylan, not surprisingly, is quite a lot more suspicious about it and way less behaved. Still, his mouthed stayed pretty well balanced, and most of the work was on his incisors.


Big Frank, not surprisingly, was the one who needed the most work. He hasn't been done in 3 years that I know of, and his dental history prior to that is unknown, so we were expecting to find a big mess in there and we weren't disappointed. My dentist let me reach into his mouth when the speculum was in, which is something I've never done before - it was kind of scary! All I could feel is that everything was wavy, ramped, and some teeth felt like they weren't there at all. My dentist basically said, "yeah it's not likely he'll be able to eat much hay but we will do what we can." She was able to get the giant wave down quite a lot, more than I think she expected to be able to do. She estimates that he's older than we thought, probably about 25. He's losing some of his incisors, and he's running out of tooth, so she did the best she could. 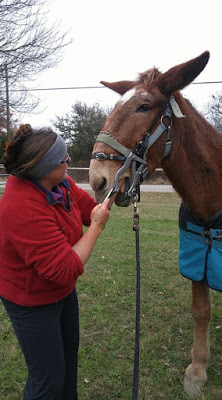 I have to say, a week out from the dentist and he's doing GREAT. He is eating so much better than he was before - he's able to chew side to side, and most of the food stays in his mouth now instead of falling out. He's eating hay now too, although not as much as the others, and I am still keeping him on the hay mush for now. These past two days he hasn't finished all his mush, which makes me think his hunger and craving for forage is hopefully being met to some extent out in the paddock, but we will see if he continues to eat it or if he doesn't. Currently he's eating Healthy Glo fat nuggets, beet pulp, tim/alf pellets, and tim/alf cubes, plus a vitamin/mineral supplement.


Good dental work is SO important. I feel like I have a good team right now - a great dentist, a great chiro, a great vet. And, a halfway decent trimmer, if I do say so myself!

Email ThisBlogThis!Share to TwitterShare to FacebookShare to Pinterest
Labels: dentist