Texas is not known for being gentle or half-assed about ANYTHING. This of course includes the weather, and this past weekend was a prime example of the extremes that we get. 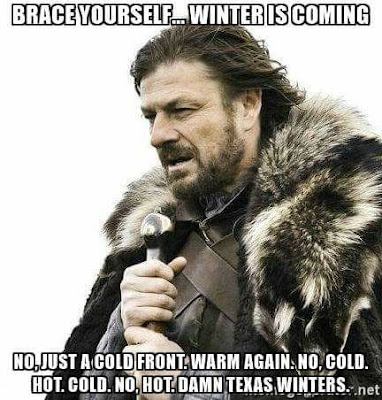 This usually happens a few times every winter, but this time it was EXTREME. It was about 75 and somewhat humid on Saturday. The horses had all been naked the night before, and were enjoying the warmth. Future Hubs and I had to leave that morning to go to Austin for his family Christmas, so I left my pet sitter with instructions to blanket them when the cold front hit that evening. We knew the temperature was going to drop, but you never really can appreciate how violent it is until it actually hits.

We were out on the porch having some beers when the cold front hit. It came in like a freaking freight train. Out of nowhere, this huge cloud covered everything, and suddenly we were slammed with icy cold wind. Chairs flipped over, papers flew, and people fled for cover as our fingers and faces instantly froze. The temperature dropped from almost 80 degrees to 20 in a matter of minutes, with wind chills in the single digits. It was like Mother Nature reached down and punched Texas in the face, and then beat us with a bag of ice.

Back at home, my poor pet sitter was faring little better. I had wrapped all the faucet heads ahead of time, and made sure the insulation in the well house was good, but all the hoses still froze immediately, and the troughs iced over. The horses were naked and the wind was gusting wildly, so my pet sitter had to catch and blanket all the ones that needed it (P, Pax, O, Big Frank, and Dylan). Most everyone was easy to catch, and I had her catch and blanket Zoodle too (she said he was wonderful), but she couldn't catch Dylan. The neighbor's collie was back and chasing him around, and he was doing his usual you're-a-stranger-and-can't-be-trusted thing, giving her the runaround and refusing to be caught by any means. It must have taken her an hour, including the few minutes where she had to go sit in her hot car and warm up. Finally she got him after she gave O a carrot and convinced him to come and get one too.

Fortunately, everyone survived the horrible weather. It was 14 degrees on Sunday morning, and the windchill was 3 degrees. When we arrived home it was little better, still very cloudy and gusty with temps in the 20s. Naturally, since *something* had to go wrong while I was away, when we arrived home all the mules and mares had let themselves out into the yard and were causing a ruckus. Dylan and O were FREAKING out. I grabbed Pmare, and everyone more or less followed her back into the pasture like little sheep. Everyone was fine thankfully, but of course, my life is a comedy of errors so something HAD to happen while I was away.

Unfortunately WD was not unaffected by the cold snap. A pipe burst in the indoor, which flooded the arena and made it unusable. I'm sure it will be fixed soon, but I guess Dylan's winter break is starting a little early! It's too cold to do much anyway, but when you have a lit arena to trailer to, you can make due during the winter even when it's chilly. Except... not if the arena is a skating rink.

Email ThisBlogThis!Share to TwitterShare to FacebookShare to Pinterest
Labels: comedy of errors, weather