Tuesday morning dawned cold and misty. I had a lesson with L that I was NOT going to miss though, so I was GOING no matter what.

Naturally, my very grey horse had spent his morning rolling in as much muck as he could find. Thankfully he was blanketed, but... I can't say he was clean when I entered the arena. I used to be so obsessed with having a clean horse all the time, and I wish I still had that ability, but.... having a horse live happily outside is so much more important to me than keeping one obsessively clean. It's very easy to keep a horse clean when they live in a stall. It is very hard to do it when they live outside, especially in winter.

I talked to L about the same thing I talked to Tarrin about, and she agreed. Relaxation is the key with Dylan. If the relaxation isn't there, nothing will come. Or rather, everything can be executed, but nothing can be executed with grace. I can always create energy, but I can't always get rid of it easily if I have too much of it. The day before the lesson, I rode at WD, and spent some time riding him underpowered, taking my time and moving slowly. I felt almost like I was sitting like a big human shaped piece of Jello, with no tension whatsoever in my body, and that really worked. It's so different from riding warmbloods. It's different from riding about anything I've ever ridden in the past. Is this how you have to ride ultra-hot TBs and the like? I don't really know. It requires almost no strength whatsoever, but at the same time you must be incredibly strong in order to allow your body to move loosely without moving sloppily. You move a lot more than you expect, but the more you allow yourself to move, the less you *are* moved by the horse. Your motion becomes very still in a lot of ways, but you're still very loose in your body. I don't know how quite to describe it. But it's very different from other horses I've ridden in the past. I can't imagine riding a bouncy warmblood like that, they would fall apart underneath you.

Perhaps the best way to describe riding Dylan is like this: there is no better mirror in the world. If I am tense, he is tense. If I am relaxed, he is relaxed. If I get a little heavy in my contact, he gets equally as heavy in his contact. If I am tight in my lower back, he is tight in his lower back. If I am tight in my shoulders, he is tight in his. If I tilt forward, he plows onto his forehand. If I sit up, he sits on his back end. If I ride with incredible lightness, he rides with incredible lightness. If I float a seatbone, he loses his hind end on that side. If I rely on my reins a bit for steering through a movement, he loses his balance in that direction. If I steer from just my seat and my torso, he is light and balanced. He's so exceptionally cool. And he tells on me ALL the time.


During my lesson, we started with some walk and trot work, semi-spiralling him in and out of a circle - turning him towards L in the center, then leg yielding him back out, then repeating the cycle. L has me paying particular attention to my shoulders, which tend to creep forward instead of stay back in accordance with the bend in the direction we are going. From there, we moved onto some simple canter-walk-canters, really emphasizing some quiet walk steps and a straight canter departure, and then counter canter on a figure-8, from true canter to counter canter back and forth on a 15m circle. In the counter canter, I tend to want to rely on my reins a bit much to exaggerate his bend - if you straighten his neck through the counter canter, he's quick to do a change if you're not there to support him otherwise. L corrected this by having me steer from my armpits, which sounds strange in theory, but in practice it did the trick. His counter canter stayed very collected and balanced, and we went through the entire exercise easily. It was awesome! It was a very productive lesson and even though Dylan was thoroughly sweaty when we finished, he was extremely relaxed. Ever since I really started paying attention to his level of relaxation and addressing that before I do anything else, everything has suddenly gotten a lot better very quickly.


I talked to L about the game plan for showing next year. My goal is my silver medal of course, but that's quite a long journey and we have to start somewhere. I'm nervous about getting back into USDF shows after not having shown in them in at least 8 years. I'm also branching out and jumping up to higher levels than I have ever shown in before. Probably what we will do is go out at Third Level until my nerves settle a bit and I can prove to myself that this really can be done, and then we will move up. L told me that I'll find Third Level very easy with this horse, which I agree with after looking at the tests. If, you know, I can keep him relaxed!


What are your goals for next year? 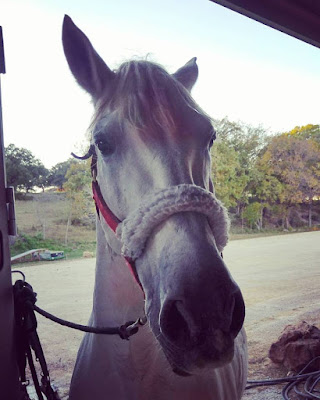