Lessons and Ponying and Fit Throwing, Oh My!

My trailer finally came home this week and I've been back to work as usual. It has been raining for over a week, with not even time inbetween squalls to get dry, which is causing me some grief. It's very hard to put out hay when it's muddy, and it's equally as hard to get anything done with anyone. For the most part, rainy days are so infrequent in Texas (or well, they were, before the past two years) that I don't mind taking them off and just getting other indoor things done instead. I do always have the option of taking Dylan to ride, but I don't always want to go muck around loading in the pouring rain.

I will have to split this post into a few so as to not clog up a huge amount of space!

On Monday I trailered out to WD to ride. The place was packed full of people, which is rare - some of them my friends, some of them people I don't like crossing paths with. I much prefer when the place is dead quiet, which is why I usually don't go on weekends. Unfortunately I had forgotten that it was MLK day :/ Since a Dylan had been off for a few weeks, I didn't do a ton of work, just some supplying walk with and simple trot and canter work with shallow half passes to loosen him up a bit. He was tired at the end of the ride, which almost never happens, so I could tell that he had lost a little conditioning. Of all my horses, he is the hardest to keep fit for sure. O's super pregnant and has been off since June, and she's still ripped. Dylan gets off for two weeks, and he comes back a marshmallow. 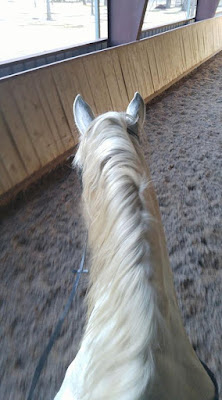 On Monday, I also got up on Big Frank, and decided to try ponying with him. We weren't sure if he had ever done it before, but he's so mellow I wasn't really worried. I also tried putting a short shank hackamore on him, to see if I would be able to steer and stop him in it. He is super mellow and slow when he has a friend with him; when he is alone, I need more turning power, and so I figured this was a better time to try a hackamore. I picked Pax to go with him, as I thought she was less likely to worry him. Pax is devoted to him, while Zoodle can be a bit domineering. Zu also likes to bite his pony horse, something which I wasn't sure if Frank would tolerate if he didn't already know how to pony.

Turns out I had nothing to worry about. He plodded along steady as ever, even though Pax herself was hot and spooky. She looked around, jigged, tossed her head, and skittered at the end of her line for awhile. Frank just walked on. It didn't take long to realize that I had no steering or brakes whatsoever with the hackamore, but it didn't really matter. He goes in a straight line at the same speed for as long as you like. I'm going to put him back in the snaffle for sure, but I see no reason why he won't be able to pony with Zoodle. Actually it might go better than it did with Pax - Pax is much more forward than Frank, and Zoodle's short legs are about the right length to keep up with his plod. Zu has a hard time keeping up with Pmare - he's just too short and she's too forward. 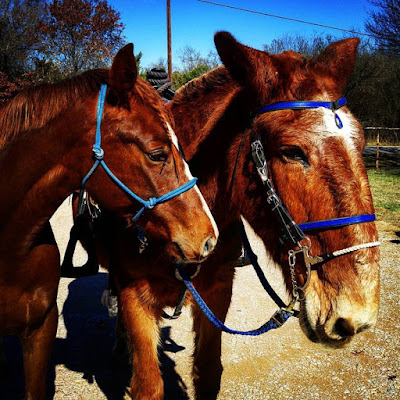 On Tuesday, I had another lesson with L. I told her I hadn't worked him much in the past few weeks, so we didn't have to do a lot of hard work. Despite that, she put our butts to work working on some suppling exercises. Primarily, we did 10m circles in each corner, then alternated in the trot from shoulder in to a few steps of half pass and back to a shoulder in, and in the canter a few strides of shoulder in to half pass, and half pass off the rail and leg yielding back to the rail in canter. Suppling exercises like that are really hard, especially in the canter where movements like shoulder in and leg yield are really not easy to execute. They're very good for a horse like Dylan, who doesn't do well with traveling along doing the same thing for long periods of time. We also did some work going from mediums to half steps. I don't have a lot of practice with half steps, but Dylan clearly knew what I was asking for. When I asked K later, she says he has piaffe and has passage started, so now that I know this I intend to play around with it in lessons!
At some point Dylan completely ran out of fuel, and we decided to wrap it up. It was quite a lot of work for not having been ridden for a couple of weeks, and he was tired. We talked a little more about the show schedule - it starts in March, and goes full steam through early summer.

Back at home, inbetween my lesson and my physio, I decided to hop on old Pmare and take Zoodle for a go. My original thought after seeing Frank do so well with Pax is that he would be better suited to take Zoodle himself, since he tends to walk super slow and Zoodle can't keep up with P very well, but since he had just gone and P hadn't, I chose her.

Zoodle was excellent. On his best behavior, interested in everything around him but not spooky, and really being perfect. I was proud of him. We went about two miles and came back around the usual loop, and he didn't put a foot wrong. Much better than his sister the day before.

Pmare though... was a different story. P gets called a cow on a daily basis, with more colorful things interspersed in there as warrants, but she really out-heifered herself that day. She's not a beginner's horse and she never has been, because when she's mad about something she's going to let you know about it. It's why she came with a bucking clause written into her sale contract! That day, we were literally in the very last bit of the ride when I had to stop her to let some cars pass. She did not want to stand when we were so close to home, so she kept barging forward and running into her hackamore. This made her mad, so she started shaking her head and backing up, dragging poor Zoodle along with her. I still wanted her to be capabale of standing immobile for a minute before we walked off again - something she usually is really good about - but she was not having it. The headshaking and backing progressed into full out rearing and throwing herself sideways. She was MAD and she was going to let me know how she felt about it.
I ended up actually dismounting and leading her back, since I didn't want poor Zoodle to be scared, not after he had been so good. I put him away, pulled out an actual bridle with bit, and rode her back out to the same spot where we had had the problem.
It fixed nothing. If anything, she was angrier than ever, and she stood immobile while I pony kicked her, trying to get her to just WALK forward from a stand still. I could't get her to go forward at all after the first halt - every time she would respond to my urging it was just to rear and spin, running backwards and bouncing into the air. The second time she tumbled down into the ditch, with no regard to her own safety, I started to wonder if I was going to win this fight.
I never did. I ended up having to dismount again and lead her back because I could NOT. Make. Her. Go. She just wasn't going to do it, and she was getting increasingly dangerous about it. Even when I dismounted and went to back her up out of my space, she put her ears flat back and barged forward, mowing me down out of her way. I hope my neighbors don't call me in for animal cruelty, because I whopped her a good one for that.

Ungrateful old cow. All I wanted was for you to stand still for 30 seconds so we didn't get run over by a bunch of trucks. 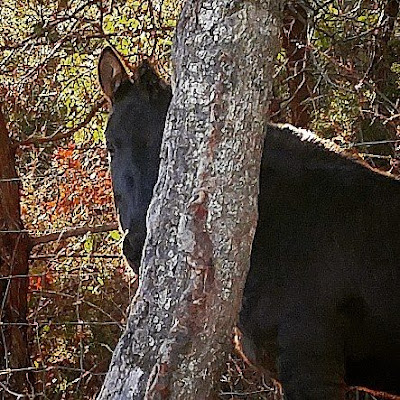