Winter, I'm over you

I'm serious Mother Nature, I am tired of this crap. Every time I turn around it is either raining or freezing cold, and the few warm days that you've given us this month, it has been way too muddy and slippery to do anything useful at all. February is NOT going according to plan in the slightest. Immy should easily be going w-t-c by now, but without an arena or lights, I am severely restricted in what I can do when the weather gets nasty. Coupled with the fact that I have a more-than-full-time day job, an ever-growing trim business, enormous amounts of schoolwork as well as case studies and certification requirements coming up shortly, well.... it has been hard to get much done. To throw in some even more complicated twists, add in the dentist (and time off after it) as well as several days when she needed downtime to keep her mental state fresh. What's a girl to do?

Winter is a really terrible time to try and start a horse when you have no arena and no lights. (Which is why so many people start youngsters in the fall and then toss them back out for the winter to start again in the spring... give them a good base, kick them out to grow up over the winter, and then start fresh in the spring when there is less of a chance of everybody getting killed!) If I had a schooled horse, it wouldn't be so bad, and I could hack out down the road or on the trails, or trailer out to an arena to get some work done. With Immy, she is ready for neither, so I have to settle for what I can get. It hasn't been anywhere near the level of work that I want her to be at, but that's life, and there's really not much I can do about it. Nature is gonna do what nature is gonna do.

So far this week, we've squeezed in three lunge sessions with sidereins, inbetween bouts of freezing weather and serious sideways downpours. Just this morning, a squall blew in while I was feeding, and I scrambled to get the mares untied and free so they could run to their shed and wait it out. P apparently had other ideas, and decided it would be much more beneficial to lick Immy's bucket clean during the deluge, while Immy absolutely panicked and spun in circles as she was being pelted with freezing rain. The shed is 50 feet away, and is completely protected from the elements, but she just couldn't deal with the idea of leaving P's side for ONE second, even if it was to her complete and total detriment, so she whirled around in circles until she finally gave up and stood with her butt to the worst of it. 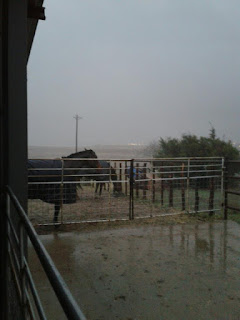 Sorry mare, you had the choice, and you made it...

Backtracking a bit.... Sunday was supposed to be a ride day, but between bunches of clients, feeding at the other barn, and the footing drying out from a previous rainstorm, she ended up having a day off instead. The same went for Monday - Future Hubs wanted to take me on a dinner date, and since we don't share a day off and hardly ever get to do anything nice like that, I of course went for it. Love is something you make time for, no exceptions... especially when you get so little time with each other as is!

Tuesday, it was back to work! It was getting dark by the time I managed to get my butt away from work and to the barn, but we squeezed in another lunge session before we completely lost daylight. I REALLY had wanted to ride, but a) two days off and a fresh hot mare aren't a great mix, and b) I had essentially no daylight left to work with. Oh well, you make due with what you have! 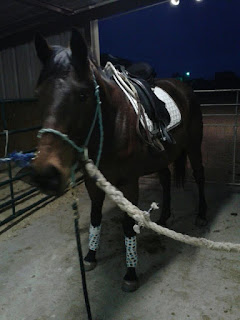 Not a great video.... and not to mention, as you can tell from her quick little stride, that the footing wasn't all that great. Ah well, it is what it is!

Wednesday, it hailed and sleeted on and off for essentially the entire day. I once again arrived at the barn as the sun was setting, shivering and soaked to the bone from a long day at work. I desperately wanted to get on P and pony Immy, but I didn't even have enough daylight left to haul out S's barrel saddle and bring it down to the barn before the sun was completely gone. I figured it wasn't too much of a loss, seeing as I was teetering on the verge of pneumonia anyway. The mares, on the other hand, were snug and warm under their blankies, and were perfectly happy to ride the elements out from the warmth and dryness of their shed. I couldn't complain as I got into my truck and blasted the heat the entire way home!

This morning, a horrible little squall blew in as I was feeding (see above). I figured there was no way the footing would be good enough for a workout of any sort tonight, but to my surprise it was dry enough for a lunge! There were still some wet spots here and there (definitely not safe enough for a ride on a greenbean), but it was more than adequate for another lunge with sidereins. I really don't usually lunge this often - I don't believe in making them pound on their joints round and round in a circle for long periods - but you make due with what you have! It is better than doing nothing at all, and keeps her from being too insanely fresh when I get back on. (These are short lunge sessions either way, so I don't feel quite so bad!) 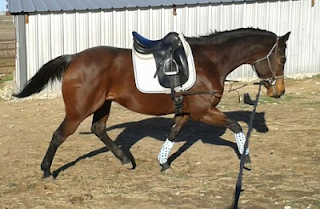 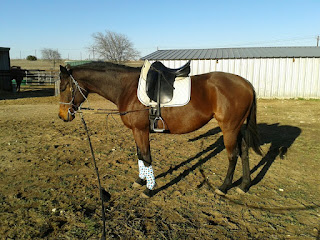 She is pretty much the most adorable mare out there. Note to self: ditch the Supracor pad. It makes my saddle slip forward apparently!

She is just now starting to understand the idea of sidereins at the trot... as you can tell by the picture below, she was still a little fresh about it! 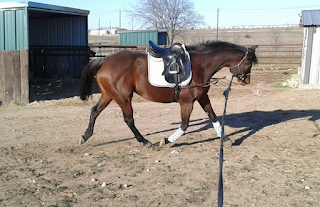 Even though she was doing a naughty and trying to turn towards me in this picture... she's still just gorgeous. 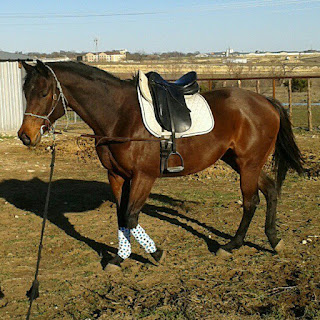 P-mare is coming into heat for the first time this year, and is acting like a total whackadoo, running around and snorting and peeing on everything: 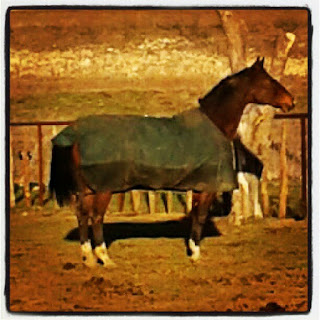 Gross. But, she looks SO pretty when she does it.