I am a firm believer in preventative therapies before rehabilitative therapies. Body work, massage, chiro, craniosacral work, acupuncture or pressure, aquatherapy, and all manner of other therapies are all ones I stand behind in order to keep an athlete in top shape as well as halt or heal issues before they become real problems. I had some really good luck with craniosacral work for Immy, and decided O would benefit from some as well when I was poking around her SI area the other week - one side of her pelvis is very slightly higher than the other, despite there being no asymmetry in her movement, and I wanted to have it looked at by someone who specializes in that particular area.

As predicted, O was kind of all wrapped up in knots, although there was nothing extremely serious to be worried about. She does have some minor TMJ issues - the next time the proper dentist comes around, the really good one, we'll use her instead. She also has that slight asymmetry in her pelvis, which might have been from some sort of old trauma. She does have some very exciting scars on her hind legs - maybe she got caught up in a fence somewhere and yoinked herself around. Either way, it's not anticipated to be a problem.... hell, if yours truly wasn't such a neurotic sharp-eyed groom it probably would have never been noticed by anybody. 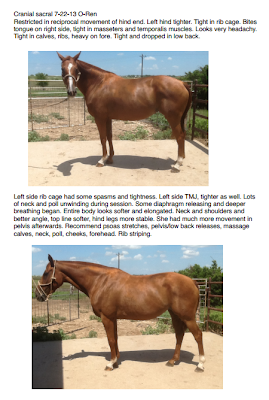 Most noticeable to me is the release through her neck, as well as her improved stance behind. I know it's a little bit hard to tell, since her head is turned in the first shot, but I can tell the difference. After the appointment, I also gave her a light trim, which included knocking back her toes a bit - it was high time to do it. She wandered away from her appointment looking a bit loosey-goosey in her back end - like she had suddenly become aware of the fact that she had a butt after all! I have some stretches and massages to do, and I'm excited to see if she feels any looser or better under saddle.

Just as a comparison, here's one of her old photos I found from a few years ago, and her cranio photo:

First photo was from before she got messed up by the trail rider, so I figure that's a good sign - standing more like her 'old' self, I suppose!

Before our appointment on Monday, we also went for a conditioning hack: 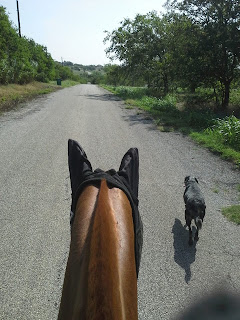 Faithful Monster Dog, always leading the way.
I shortened up our conditioning hacks to just be an hour's worth of walking up and down the street, and instead of adding incremental walk and trot time I think we'll just stick to an hour's worth of walking for now. That said, I kind of want to do some LD endurance rides with her at some point... so I might consider taking some time out to figure out a way to use our conditioning hack days as something to gear towards that. (And maybe use our gallop days to do more patterning on the barrels..... there's so many things I want to do with this mare! She'd be fun to break to drive too, but I think we'll save that for when she's a little more broke... can you just see us in a cart park trotting past your house, me hanging on for dear life and waving hello? Nice to see you today, we're just on our way to match against the Standardbreds, love to chat longer but I have no brakes!!)

She had two days off and a light lunge following her therapy. I saw no difference in her movement, but maybe we I get back on her tonight I'll feel something different. I hope to get up to WD, but it might be too late in the day to try.... either way, a hack or flatwork ride is in store!