YES. I am a lucky, lucky kid.
I keep O at a friend's house. I am eternally lucky and grateful for this situation because I don't pay board - I just care for her horses when she is out of town, and we call it even. They hopelessly spoil me by going and picking up hay and supplies for me, and since they also own a tack business I get everything at cost. I. Am. LUCKY.
The facilities at the house are great - huge fields to gallop and hack in, big spaces to work on flatwork, a roundpen if I ever need it, a big huge properly fenced pen and gorgeous shelter for the girls, and good company to ride with (and wine, lots of wine! And a garden to raid, I have recently been eating myself sick with fresh beets and squash!). BUT, there is no arena, and when the ground gets mucky there's really nowhere to do serious work, unless you hack down the road (which we have been doing as of late anyway).
There are a number of really awful arenas around in our area to trailer to, and a handful of decent ones, but the ones that are actually covered and weather-proof (from either the rain or the blazing Texas sun, which is just as miserable if not moreso!) are extremely rare. Not that many people around here have covered arenas - actual indoors like the ones up north are WAY too hot, and the expense of a covered arena is an awful lot when you look at the fact that for the most part, so long as you ride at the right time of the day, you can ride outside here all year round. Our area is really the heart and soul of eventing around here, and while that means basically nothing if you compare this area to Area II or III, it's a pretty lucky place to have landed in. I have several big events that are within close driving distance, including a two-star that I can literally walk to from my house. For the most part, the rest of the barns around here are all filled with cutting and barrel horses, with some nice H/J and dressage places on the other side of Dallas. My area is the cutting horse capital of the nation.... even our local McDonald's features a statue of Ronald McDonald sitting on a Paint horse cutting a calf. AND he's doing it bridle-less. I'M SERIOUS. 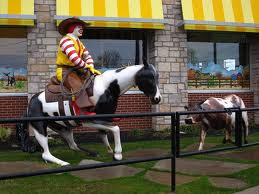 So, what is an eventing girl to do around here when she needs to find a place to trailer to that has a covered arena, some decent stadium jumps, and a XC course?
Enter a local private facility, WD. You have to get on the wait list to get a membership, but once you're in, you pay a flat rate of $75 a month, which then allows you to trailer in as much as you want - every day if you felt like it - and use ALL the facilities. There is a HUGE covered with awesome felt/sand footing, a dressage court, a big outdoor all-weather with a ton of stadium jumps, a gallop track, and a huge XC course complete with two water complexes and jumps up through Training (might be a small Prelim fence here and there). Last week, I lucked out - the owner e-mailed me to let me know she had a spot for me. YES! This is a TOTAL game changer - we can do as much proper training there as we could possibly ever want! 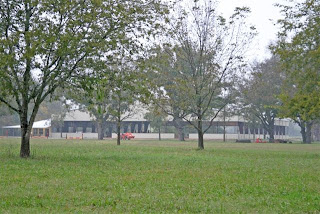 I took O over for her first dressage workout in the covered last week. It was still raining at that point, which was insane, but we managed to sneak in between squalls and go for a little hack around the property before heading to the covered. 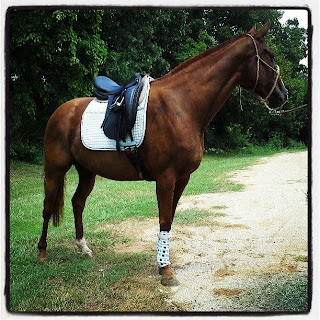 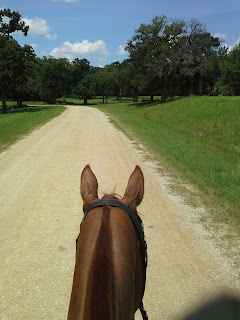 It really is paradise. And somehow, magically, it is always green, even when the rest of Texas is sad and yellow!

O was actually very good. We just did some simple walk-trot stuff, not even bothering to do canterwork - all I wanted to focus on was just being able to trot around in a quiet rhythm, with no major freakouts/pulling/rooting/running off/general goofiness. In that I was very successful - I think that is the quietest flatwork session I have had on her yet. It was also the first time I had gone sans 'training wheels' on her - without either a neck stretcher or a martingale - and was delighted to find that her head tossing didn't return. When I first got her, she about broke my nose several times on our first couple of rides due to all her out of control head flinging, so she got put in a set of headgear, graduating from one to the next as her behavior improved - first a neck stretcher, then a chambon, then a running martingale. The neck stretcher kept her from using her head and neck against me, and from being able to grab the bit and run away - she just bounced against herself, and I sat there doing nothing, not having to fight her. The chambon let her have a little more freedom to poke her nose out - you don't get that effect in the neck stretcher, so I was keen to graduate her out as soon as I felt the bit grabbing and taking off were more under control. I started using the martingale once I felt that she could be allowed a little more freedom, and while she did try to toss her head a few times with that, she hit the martingale and stopped herself in her own tracks - well, that's what it is there for mare, sorry about that but that's not something that is gonna fly here! If at any time the head tossing returns, she'll go back into one of those, but she can't stay in them forever.
We're a long, long way from putting out a halfway decent dressage test, but I was very happy with her overall behavior that day. And looking in the mirrors, we actually didn't look half bad, even if it feels a bit like a total mess to me!

The following day, we had a nice lunge, since the rain had FINALLY quit - look at how GREEN everything was! (It already back to yellow... sigh.) 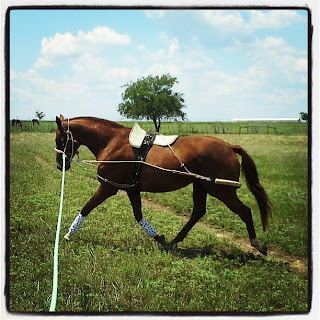 I gave her another day off after that, and did a second lunge on Sunday, which I posted a video of. So, we mostly kind of stuck to our schedule for last week, but it wasn't quite what I wanted due to all the rain. Ohhhhhh well. We'll be able to trailer out to WD at least one or two times this week!

She says, dude where's my dinner, stop with the baths and the photos already, COME ON. 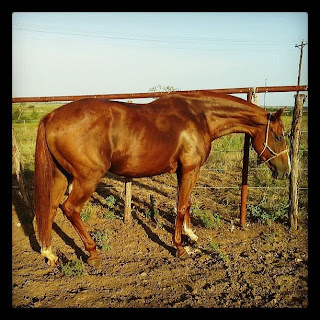