If there is one lesson to be learned in training and retraining horses, it is this: a horse cannot be expected to be able to form words and phrases without knowing all the letters of the alphabet first.

What is the alphabet? It starts out simple. A horse must learn to carry a rider, stop, go, and turn. The horse learns about the inside leg, the outside leg, the weight of the seat, the contact, and going forward in a quiet and steady rhythm. The horse learns about half-halts, learns about adjusting his stride, learns about bending, learns about stretching, learns about compressing. The horse, in essence, learns her general alphabet as the basic training from backing to Training level dressage. She learns, in essence, to balance and respond appropriately to all leg, seat, and rein aids. If there is a set of letters missing from this very basic alphabet - if the horse doesn't respond to half-halts, if the horse rushes, if the horse takes an inappropriate contact, if the horse doesn't steer well, if the horse responds incorrectly to leg aids, if the horse is crooked, etc - there will be NO correct progression from then on. You will always have holes in your training, and until you go back and fill in the blanks, you'll get nowhere. It's the set of basics ALL horses must have - without it, your eventer will rush and crash around jumps, your barrel horse will run away with you, and your trail horse will not listen at obstacles. When people have problems with training, they need to go back to the beginning and find out what exactly is missing in the first place. Chances are, if a horse is having issues, it is missing a critical piece of the very basic equation.

O's issues on the flat are pretty multifaceted due to her spree of bad un-training by the idiot trail rider. She understandably has major contact issues - she ducks behind the bit, grabs it and hauls on her rider, and raises her head and tenses her back, all in a relatively constant cycle of one right after the other. On the lunge, she no longer does ANY of these things, so I figure it's just a matter of time and giving her a quiet and consistent contact to bounce around against until she decides to explore it and stretch into it appropriately. Before a horse can do that, they need to have the rest of their aids in place, which she does not. (That said, she has already come a WORLD away from where she was - more on that shortly.)

What else doesn't she have in place? She started out very, very unbalanced on turns (drops her shoulder and motorbikes at high speed instead of bending her body around the arc of the circle) as well as on downhill slopes, with not much much in the way of bending or sideways signals. She also had no concept of half-halts or seat aids, and would just NOT stop half of the time. She would respond inappropriately to leg aids by hollowing her back, slowing down, sulling up, and making faces, in a very "don't want to you can't make me" kind of way. She also was always on the brink of running off at every gait - not bolting or running away out of control, per se, but whenever she liked she would grab and bear down on the bit, and zoom off at whatever speed she felt like going, with no brakes and no steering. She did it at every gait - yes, your horse can run away with you at the walk! - and there wasn't really any rhyme or reason to it. Basically, she spent the first two months of her time with me trying every trick in the book for getting away with doing absolutely everything except accepting the contact and going nicely forward with a steady and straight rhythm.

Now, this is all changing. She is slowly, slowly starting to put the pieces together, although it is a work in progress. It is going to take a very long time to get her to the point of putting an acceptable Training level test together, but we will get there.

Our ride on Monday of this week was out at a local covered arena, due to a TOTALLY random rainstorm (seriously. it rained for four days here, with temps in the 60's.... yes, in July in Texas!). The last time I went by this place, I checked in on the footing and it was great. (It used to be notoriously bad.) I thought to myself, yay! I can use it now! Unfortunately, when I went over there with O, the footing was complete trash. The outside of the ring were bone-dry and dusty, and the middle part was insanely deep, mucky, soggy and rutted, pockmarked with holes from the horses who had been running barrels on it before. (I'm pretty sure even barrel people don't like their arenas that deep and mucky and full of holes). I did the best I could, but she wasn't particularly on her best behavior - I can't really blame her for that, seeing as she spent half her time struggling to maintain her balance. I tried to lunge her before I got on, but there was really no point to it, so I just quit and got on. At one point, she fizzed up and I really needed to get up off her back and let her canter around for a few minutes, but I just didn't safely have that option. I managed to get her to move out a little (without being too much), and stretch out some, and I called it quits with that. It wasn't exactly what I had in mind, but it's better to end on a high note than a low one. 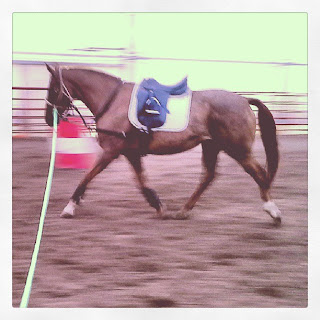 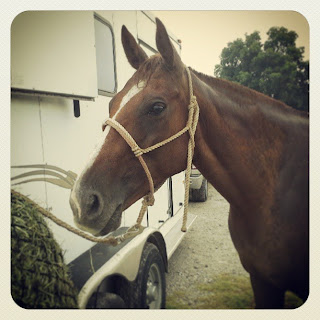 Tuesday, I managed to sneak out between rainstorms for an hour long hack down the road, complete with 5 minutes of trotting up the road on a loose rein. It is truly remarkable how much she has transformed on the trail - she used to be completely freaked out, jigging and tossing her head, spooking and scooting sideways, completely incapable of dealing with all the stimuli of the outside world. (I'm not really sure if she ever had any trail experience before I got her or not.) Now, she hacks out on a loose rein, completely quiet and interested in her surroundings. NOTHING scares her. I know, I keep trying to! On Tuesday she walked past big overturned garbage cans banging around in the wind, rattling mailboxes, honking semis, barking dogs, and jogging neighbors without so much as a misstep. (Well, she WAS inches away from a mailbox at one point and a grasshopper flew up and hit it with a loud and resounding crunch... then she was interested.)

She was SO encrusted with black gumbo mud that I literally only managed to get her saddle area clean before I gave up! 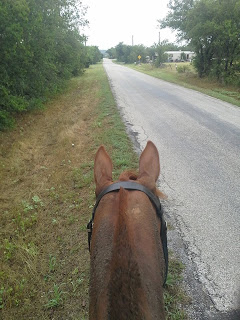 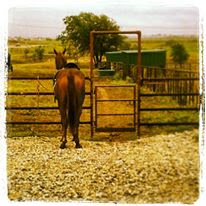 Wednesday was a total blowout - it poured and raged ALL day long, and I ended up just cuddling up with a bunch of pets and letting her have the day off instead of going with our planned dressage day.

There is more to catch up on concerning the rest of the week... but this kid needs some rest. I am POOPED. More later!