Oy vey! You ever just have one of those rides where everything just goes to hell in a handbasket? I had one yesterday and it sucked!

It's really just not been a good week all in all. O in heat, which basically means she is a distractable tight-backed cacahead, to put it nicely. She gets her panties all wound into a knot, and can't seem to untwist herself no matter what. Last Saturday, I thought I'd try to stretch her out a bit on the lunge, and try a chambon on her instead of the Faux-ssoa. I thought, hey! This will help her relax through her back and allow her to stretch out properly (demonstrated by Gogo here). I think our time with the Faux-ssoa has come to an end - it's time to get her stretching down and out more, and she just can't do that on the lunge properly in anything but a chambon. I thought well hey, let's give it a try!
WELL. She was not having ANY of that nonsense. I should have known when I went to go rig it up, and she just stood there, totally unaware of the poll pressure even though it was pretty darn tight and any reasonable horse would have lowered their head (and she KNOWS how to lower her head in response to pressure!). She then spent the next HOUR running 9-0 on the lunge, completely braced against the chambon and totally unwilling to even think about trying to lower her head and move away from the pressure (which, again, she knows how to do). I thought I'd just let her zoom around for a bit, and she'd figure it out, but I was just plain wrong. She just RAN. A LOT. 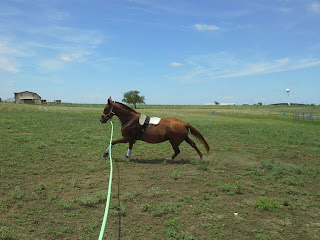 At one point, she stumbled and bounced around for a minute, and one of her boots started flapping. Oh no.... did I kill the boots? 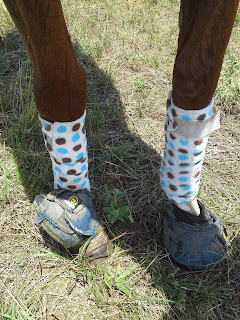 I did. Dead boot. I might be able to *try* and fix it, but I'm no handyman when it comes to things like this. Sad too.... I put those boots through everything I could think of, and was really starting to think they were indestructible. What took them out? Lunging. Fail!

Finally, I threw in the towel and hooked her bungee up as a neck stretcher instead of as a chambon, just to change ANYTHING to make it better. It did help - we got a few minutes of a decent stretch and I called it quits for the day. I bathed her, stretched her, linimented her liberally, and let her back out in her pen to rest.
Now, if I had any sort of a decent memory, I would have remembered what had happened the LAST time I liberally linimented her. I usually use just a little bit, but the last time she worked REALLY hard, I more or less doused her legs in it, and the next morning was rewarded with HUGE fat legs, all four. Sunday morning when I showed up to feed breakfast? HUGE fat legs again! To say I felt like a total idiot was an understatement. I washed her legs off thoroughly and wrapped her, scrapping my plans to go to WD for the afternoon. By lunchtime, she was already a ton better - just washing off the residue from the liniment made a huge difference. By that evening, she was back to normal again.... phewwwww. Only all-natural stuff for her from here on, or only light coats. Her skin is just too sensitive.

On top of all of that, the area where the chambon was sitting when she was pulling so hard on herself developed a small hanging pocket of edema between her front legs. OF COURSE. Curse you, hormones!

I had a decently good ride on Monday. S and I trailered out to WD on Monday with the horses, and went for a long hack around the property before going into the indoor to school for a bit. O was fizzy and hot, like she usually is, but wound herself down a bit and settled into a pretty quiet rhythm. I did put a martingale on her, just because, but I think I won't be using it much anymore. Trying to get a tight-backed, tight-necked horse to stretch out is not an easy thing to do... we get moments where she loosens up, but we lose them just as fast. At this point, any flatwork ride where I have her mostly under control and where she doesn't have a major freakout is considered a success.

Tuesday? Psh. Tuesday was a whole different beast. I'm not sure what exactly got into the both of us, but neither of us were really on our game. I decided that my plan for the day was to do some hacking and some little XC jumps, just tossed in here and there for fun. We warmed up fine, in a relaxed manner, and hopped over some little crossrails and a little log a few times to get her rolling. Good, good.... this is starting out well. Off we went to the first little log along the way... and.... refusal. Okay... second approach. Refusal. Third approach, refusal. She looked at the log as though it might actually jump up and eat her... I couldn't figure out why it was so scary. All right, let's go over there and try that little log instead.... refusal. Really? Second attempt.... leaping stag jump where she threw her head on the landing side and yanked herself in the face due to her running martingale. Sheesh, what on earth is going on!?

Considering how awesome she was at the XC school we did right before this one, I stopped the schooling and assessed the situation. I had a few theories as to what was going on:

1) She's in heat and just was not quite in the game that day.
2) Tall grass was slick and she may not have felt secure in her footing.
3) Brand new course she had never seen before, still very green on XC.
4) I was not giving her a very good ride at all!
5) After the ride was over, I found that her little leftover bit of edema had rubbed against itself during the ride and was very sore between her front legs. Ouch... I wouldn't want to jump either, poor kid. I felt awful!

I decided at that point to walk over a little log a few times and trot her over the same log a few times, and had decently good success doing that, but I decided to call it at that point and try something else. We went into the outdoor, where they have very nice stone dust footing, and I set up two crossrails in a figure-8 pattern. The first few jumps she was just as awkward and weird over, throwing down the landing gear as fast as she could the first few times, and throwing her head up halfway through the jump. I gave her THE longest amount of rein that I could without losing total control of her front end (seriously, it had to be like 10 extra inches of floppy rein) and held her martingale strap to make ABSOLUTE sure that she had zero contact before, during, and after the jump. (The mare is going to force me to have better equitation over fences.... if I don't perfect an auto release quickly, I am going to have a serious problem on my hands!) Once we went through it a few times that way, she perked up, got bolder, and jumped better. We ended on a great note, thankfully.

I think my plan is this: nix shooting for the schooling show at the end of the month and take it all the way back to basics again. Basics on the flat, and basics over little jumps in the arena, placing serious emphasis on making sure I give her a good ride no matter what. I'm going to do away with the martingale altogether (although I might consider a standing martingale if she ever gets to tossing her head again), and use a neck strap to just make sure I stay out of her way while she organizes herself. Kat is sending me hers to try.... score!


I also am trying out some Superfast glue-ons for her, just for funsies: 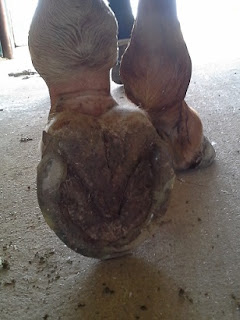