Well... phooey. Our first scheduled schooling HT of the season - of ever! - was supposed to be the weekend of the 21st-22nd. The schooling HT at WD that we were going to do got cancelled, and I opted to just school at the Curragh show instead of actually show (only because of the dressage test at that show... Intro C is super complicated for that level and has canter work, which I didn't think she was ready for... seriously, the test is more complicated than all the BN and N tests put together!!). The Curragh school went great, and I was feeling confident that we were going to head off to the Lazy Dog show and have a great first experience - the courses were a piece of cake, the dressage test was just Intro A, and all was going to be chill and fine.
And then, I found out today that the show had been cancelled.
BOOOOOOO.

Ah well, nothing to be done about it. I'm glad I went and looked at the NTEA calendar again, because that isn't the only change on there.... tons of things have been switched around!! I forget about the difference between schooling shows and recognized shows.... the recognized ones are for the most part set in stone, and are usually held at the same times every year. The schooling shows get cancelled, get added in, get moved and get altered all the time, and that's just how it is. Our new/altered calendar looks something like this:

This also means I need to contact Dr. H and switch up her hormones... not totally sure of what our plan of action is going to be, but something will need to be done! 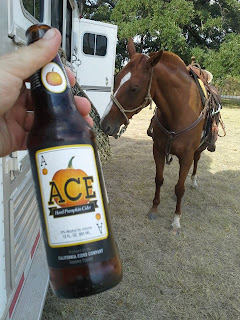 Here's a comparison video of O at the rope arena in July, and at the rope arena on Tuesday... don't mind me flopping around like a dying fish in the western saddle, check out how she is finally getting the idea of stretching out and taking the contact! (Notice how much she was flinging her head around in the first video - she was wearing a tie-down as well. Second video, no tie-down, no nothing except a snaffle and no noseband!)

Yesterday was a great ride too - I spent an hour doing flatwork at WD in my jump tack before heading out to the XC course. She doesn't feel as free in her back in my jump saddle as she does in my dressage saddle.... for all intents and purposes it fits her well, but I think she's not as fond of the firmer foam panels on that saddle versus the cushy wool panels on the dressage saddle. She was fine, she didn't do anything wrong and certainly behaved well.... she jumps well in it, she stretches out and gallops great in it... she just isn't as elastic in her back when we're flatting.
After her preliminary workout, we went out onto the XC course to play a little. I had her in her mullen mouth snaffle, not the pelham, so I wasn't totally sure if we'd have brakes... but we did! That hour of "hey there lady listen to my half-halt" helped a lot in that. Ideally I want to get her to where I can run her in a snaffle XC if at all possible.... XC is exciting though, it's hard to blame her! The girl LOVES to jump.... even fences that are spooky to start, she'll slow down, sniff them, and then walk right over. On the second approach, and every approach thereafter, she's dragging me to them. This obviously won't work for bigger fences that you can't step over, but for right now it serves as a confidence builder. I want to try and make sure she never learns how to run around them... she needs to think there is only one way to get past the jump, and that is OVER IT! She did several logs, coops, little benches and of course the water, which she runs through with enthusiasm every time. Her form is improving too - sometimes her green-ness gets in the way of her enthusiasm and she goes flailing over things with legs in every direction. That just takes time, and she is showing continual improvement. Even if we can't do our little schooling HT this month, she'll be more than ready for the Curragh show next month, Intro Test C be damned. We can do it! 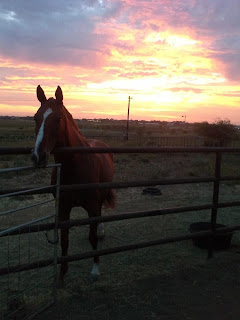