November is here and the weather is PERFECT. Sunny with temps in the mid-70's.... who can complain about that!

Our October goals seem to have completely collapsed mid-month. Not being certain that I want to actually event O after all (after giving her form over fences a long, hard look) has really thrown everything to the wind for the moment for her. I'm still 100% undecided on whether or not I want to keep trying to make her an eventer or if I want to turn our focus to other things (or do both at the same time).... I really don't know what I want to do. I'm so competitive that it is hard for me to abandon ideas!

4) Revise show schedule - what do we want to do this fall vs. this spring?
Well, I DID do that at least.... I have a whole new plan!

5) What else do we want to play with? Driving, poles, barrels, roping, trails - make some loose plans for other fun things!
Now THIS is what I really focused on. I've been in touch with a carriage maker who is local (the ONLY driving person this side of Dallas) who will give me some driving lessons soon, I hope! When S gets back from all her travels, we're making a pact to go to a barrel race a week (or every other week) - there are SO many around, several a week, all local! We'll start to exhibition, like we did at Glen Rose, but this is something she is probably going to be really good at, so it won't take long to get going faster. I have to set up the poles... they are sitting out and I don't know how to properly space them, so I have to wait for S to come back. (Or maybe I will look it up myself!) We are going to our FIRST little endurance ride NEXT WEEKEND! It is just the Intro division - it's only 9 miles - but this will give me a good idea of what to expect. I need to get my physical issues under control through... my calf cramp is making longer rides miserable.

O-Ren November Goals:
1) Really consider the eventing question.... to keep at it or no?
2) Get through our first endurance ride alive! And look for the next one!
3) Continue patterning on the barrels... and try poles!
4) Chiro adjustment! She hasn't needed anything so far but it pays to be proactive!
5) Continue long-lining, all over the place! 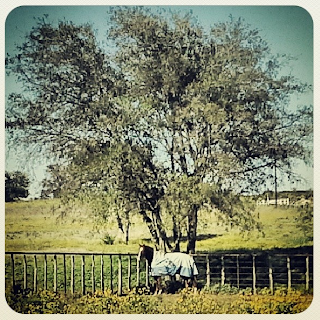 
And of course, Tre needs her goals too!


Trebuchet November Goals:
1) Get going under saddle.... good behavior, w-t-c!
2) Trailer out to a few places... behavior in the trailer and at the places we trailer to!
3) Start going out on trails with a buddy.... work on being a good girl!
4) Tack... try to find some things that actually fit her tiny shrimp size!
5) Put on some weight and muscle!


Tre is doing really, really well on the lunge, and not so well under saddle. When you buy a horse for as cheap as I did - a horse that supposedly had physically problems, but so far hasn't taken so much as a gimpy step - you wonder how much wasn't told to you. She just turned 5, so she's young anyway, but while she seems to be pretty quiet on the lunge - even a little bit lazy - she is much hotter and much more anxious with a saddle on, and with a rider up. Lunging her in the Faux-ssoa, she is quiet and slow. As soon as you get out that saddle and she sees it, she is nervous pooping. We had a pretty exciting incident today when she pulled totally free on the lunge and took off across the field in full tack. (Which is why it was beaten into us that you never lunge in an open space...) It's my fault, I was not paying enough attention and let the line more or less just fall out of my hands! I don't know what I was thinking. She had a good few gallop laps around and around the field, and then finally stopped and came back to me (good girl). We lunged for quite a long time after that.... she was much more 'up' than she had been in the Pessoa. MUCH more up.


I lunged her until I felt that she was relatively quiet, and then I hopped on. She definitely has some behavioral stuff that needs to be addressed immediately... mostly she just wants to go where she wants to go (back to her friends!), and screw you if you're in the way. She balked, she rooted hard, she went sideways, she jigged when we faced the barn and refused to go forward away from it. She's a pretty good natured little girl for the most part, so it just took a few walking circles to quiet her down. She's in heat big time too, so that REALLY isn't helping!

We'll get to the bottom of this. We ended on a nice note, a quiet halt away from the barn. I am starting to understand why I never saw pictures or video of the mare being worked in anything but draw reins... she gets her head HIGH when she wants to. I'm curious to know what she would do if I put the neck stretcher on her, but I'd rather just avoid gadgets of any sort. With the reins loped behind the stirrups (in the video), she put her head high and fussed for a few minutes, but eventually relaxed into it, more or less.


Today, I tried two new things with O. The first was a set of Easyboot Transitions, which I was SUPER excited about.... aaaaaand they don't fit. Apparently she has sized up since her brand new foot hit the ground! She has gone through a whole cycle of growth already, and while she still has a LONG way to go in terms of getting the back of her foot strong and her sole thicker, she has really come far. She still needs protection for rocky or rough ground, and I am hoping the sleek new design of the Transitions will keep the boots from turning or rubbing (which happens with the Cavallos regularly).
The other thing I tried with her was a long shank hackamore instead of her usual snaffle. If she is to do endurance regularly, she is going to need to learn to eat on the trail, and she is not keen to eat with a bit in. Even when she had been fed a cookie or has snatched a last mouthful of hay when tacking up, she'll hold it in her mouth for the entire duration of the ride and not eat it. I wanted something that gave me some level of control still, but would leave her free to eat when she needed to. The hackamore had a long shank, but not a SUPER long shank... but it ended up being WAY WAY too much for her. The first rein aid she got was mostly an accident, when she spooked hard at one of the neighbor's dogs (which is odd, since she never spooks at anything, much less the dog she sees every day!). She threw up her head, hit the shanks, and EXPLODED. I'm not entirely sure how she managed to stand on her hind legs and run backwards at the same time, but she did! We tried to do some more finesse work, and while she was more than happy to trot along on a loose rein, the moment I so much as touched the reins, or the shanks jingled a little, she threw up her head, hit the brakes, and smashed me in the shoulders with her neck (years with Gogo taught me to get my head out of the way when a horse gets too light in the front end!). I had WAY too much in the way of brakes, and NO steering whatsoever.... not good. 15 minutes into the ride, my calf locked up badly, and I was in such horrible pain that I had to quit and get off. I'm really getting frustrated with this calf problem... it's terrible.

So we had one galloping loose beast and one naughty pony, one set of boots that didn't fit, and one rearing horse who did not like her hackamore at all. Did I mention the best part... that my horses got skunked last night?? I couldn't figure out where the stink was coming from... it was Tre!! The mares both had curious scrapes on them, so I wonder if there was a scuffle trying to get away from the stink. My guess is that Tre, the curious one who chases dogs and cats around, went for the skunk thinking it was a cat. Not a cat Tre, not a cat!!
Oh, and poor Shitten is going through a growth spurt and is pretty lame.... and the elderly Corgi is really lame today as well, for reasons unknown. What else can go wrong today??

Nothing else, I hope... it is bedtime, and I am ready for this day to be DONE! 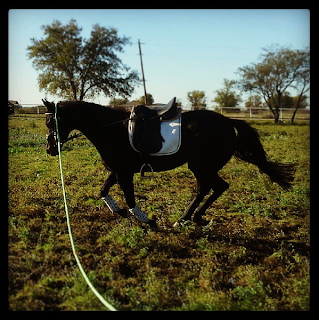