Tre has been doing really, really well under saddle - she is starting to understand the idea of forward and taking a contract, and she is also starting to ride out away from the barn. Therefore, it was high time to take our first trail ride!

You guys know me - I try to make my horses broke, broke, broke. I want them to go anywhere and do anything, and I want them to be able to physically and mentally take it all in stride. I want them to be confident and careful about their footing. I want them exposed to EVERYTHING, and I want them to learn that they never have to be scared so long as I'm with them. I did the same thing with O, and now she rides anywhere on a long rein at any speed no matter what is going on. I wasn't sure how Tre was going to handle her first ride out, but it was time to give it a go! We opted to go ride out in the big cow pasture instead of down the road, which is a nice place to start them out. (Obstacles to deal with on road: cars, emus, donkeys, running dogs, mailboxes... a lot of things. Obstacles to deal with in the cow pasture: cows, water, scary looking debris... also if she were to freak out and dump me, she wouldn't be loose out on the road!!)

She really surprised me with how bold she was. O is more of a tag-along model - she likes to tailgate the other horses and follow behind the others, she is not really interested in leading. If she is by herself, she's the same (although it took a long time for her to be that way). For as speedy as she is at the trot and canter, she has a pretty slow walk, and usually the other horses outpace her anyway. Tre, on the other hand, totally surprised me by being the immediate leader, barging in front of S's mare and walking along at about 9000 miles an hour with her ears pricked. S's mare is a real hothead, and she couldn't even keep up. She broke to the trot several times - she wanted to go! Despite that, she took all of her half-halts REALLY well, and was easy to maneuver and turn.

Her old owners told me she had been on a trail ride once, and that the only thing she really didn't like was he water (apparently they had to back her in). There are a LOT of water crossings and puddles out in the pasture, which is good practice! At the first little puddle, she followed S's mare right across. S's mare actually skirted around one side, but Tre just stomped right in! At the next puddle - a BIG LONG puddle - she looked down, paused for a second, and then plowed in. Halfway through, she quit following S's mare and turned of her own accord so that she could stay in the water! She had fun splashing around for a few minutes, and then she started to do that leg-buckling-I'm-about-to-lay-down thing, so we exited with haste. The final water crossing she encountered was pretty scary, complete with muck and moving water. S's mare went first, and with some hesitation, Tre bounded across too. O doesn't like that water either, I can't blame either of them!

There are large piles of debris around the old cow shed, and we decided to go check the stuff out (there are many things to make jumps with over there!). Tre wasn't afraid of any of it, but wanted to check it ALL out. She was more than happy to walk back and forth over a giant white plastic pipe (looked a bit like a huge PVC pole), and didn't care about all of the debris around. She is a little too bold for her own good - she walks TOWARDS anything that she isn't sure about! There were even several huge tractor tires piled up next to the trail that she gave a wary eye to, but then decided that she better go check them out. She stepped right up to them, clonked both fronts on them (and didn't care about the noise), and stuck her nose right into the center of one of them!

The last test was the group of cows. The cows see us all the time so they don't care about us, but of course Tre hadn't seen them before. She wasn't completely sure what to think of them, but true to her form she went marching boldly up to them - I had to actually stop her so she wouldn't get too close too fast! She didn't like when they were behind her and walking towards her very much, but she'll get used to that. SERIOUSLY impressed... some horses totally melt down when they see a cow. I suppose she is a QH after all...! 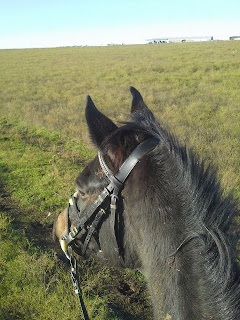 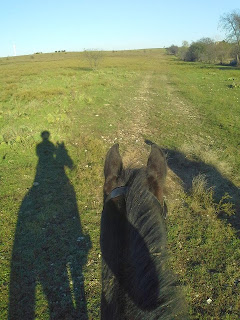 Can't tell you how impressed I am. She led the way, walked boldly up to all the scary things, and kept her cool the whole time. Not bad!!!!

Both ladies had really great lunges today too. O is back to work, not because her legs are no longer swollen, but because I was getting tired of her sassy crap. She is sound and she is SASSY - her bumps will continue to go away with time, but somebody was going to get creamed if she didn't get back to work. She always comes to me in the pasture, but apparently she won't let S catch her anymore, and the other day when S got her into a corner to bring her in for breakfast, she fired off a couple of double barrels directly at her. NOT okay! She's never done that before - I really didn't think she had it in her, and I'm surprised she did it. Either way, she needed some work before things got any more out of hand.

When working on the lunge, Tre and O could NOT be more opposite. Tre likes to give her best little low-headed trit-trot and slow pokey canter. You have to really engage and push her up into a proper working gait, and it takes reminders to keep her going forward, especially in the trot. O is her polar opposite - her working gaits are WAY too fast and forward, and she likes to go in a very high-headed, totally inverted way, with her front legs running out in front of her and her hinds flying out the back. I did the same exercises with them both today, but used them for completely different reasons, and had great results with both.

The exercise just involved the Faux-ssoa and three trot poles. I feel like I lunge these two quite a lot.... I'm normally not a lunger and not a gadget person, but I really like the results I've been getting. I won't use the Faux-ssoa on them forever and I certainly will totally cut out the lunging when they are ready, but it is doing great things for them both right now.
The three trot poles were spaced so that Tre had to stretch to make them, and O had to compress to make them. Same distance for both, their length of strides is just that different in the trot - and it is totally opposite in the canter, since Tre covers twice the ground that O does in the canter.

For Tre, we warmed up, and then started trotting over the trot poles. We then did lots of quick transitions, trotting over the poles and then up into the canter, and down into the trot right before the poles came up on the circle, then back up into the canter right after the poles. It really engaged her hind end and stretched her back out, and she really had a great trot going by the end, complete with super soft slobbery mouth. (I lunge them both in a Happy Mouth mullen mouth and just a headstall, no cavesson.)

For O, I let her roll for a few minutes before getting to work (she was SO FRESH), and then we started doing trot poles. We did LOTS of trot poles before we even thought about the canter. I actually think doing quiet cantering in the lunging system is really going to help her canter under saddle out a lot, since it will help her figure out how to balance herself better and not get so dirt-bikey. The canter started out rushy at first, but what I did was canter for a minute, then go back down to trot and put her right back over the trot poles. When she comes down from the canter, her tendency is to just run as fast as she can out of control in the trot - she has speed in her head after the canter and that's what she wants to do! When she came down out of the canter and had to go right to the stride-regulating trot poles, she had to really adjust herself. It worked really well, and by the end, she too had a super slobber goober mouth!

We started with this... 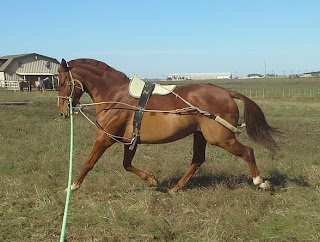 Hollow back, running, compressed neck, no contact, ticked off.... not good.

Then we did some of this... 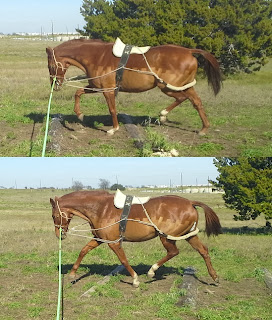 Top picture was early in the session, bottom picture was later, as you can tell by the sweat... you can see how she was really starting to use her body as time went on.

Then she offered up some of this on her own.... 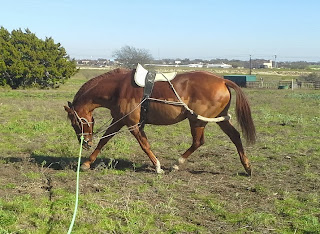 Stretch that back woman! 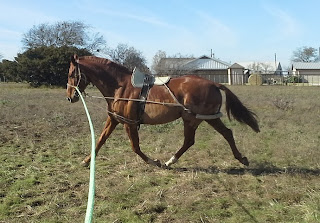 Loose and swinging, relaxed through her back, taking a contact, much happier, much better rhythm/balance/cadence/speed/everything.

And a nice goobery mouth to finish on, which she doesn't always have! 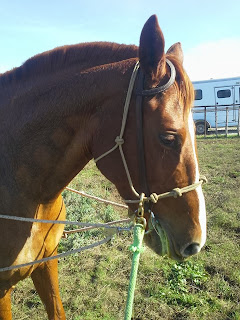 She says "phew that was hard." SO glad I clipped her, look at her sweating!