Excuse the excessive number of posts lately. I've been cooped up in my house with only my stir-crazy animals for company for the past three days. The weather is supposed to intensify and worsen, so I am probably going to spend even MORE time huddled under blankets on my couch. BORING.
The house is really cold despite the central heat, so I've not had much incentive to move out from under the blankets. I've mostly just been sitting on my butt, eating comfort food and drinking hot tea nonstop. I'm about at the end of my sit-on-my-butt rope, so I've been distracting myself with excessive spring planning. What's a girl to do?

Although I did manage to squeeze a lunge/ground session in with Tre both yesterday and today.... 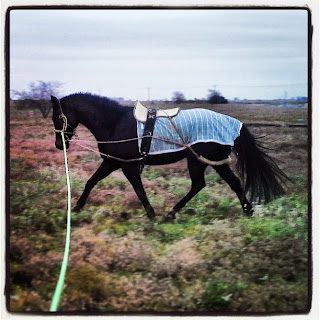 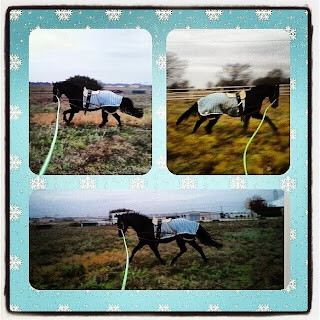 Yesterday, the sleet relented enough for me to get her going (the ground was kind of firm enough to get it done, sort of). I had NO intention of getting on her - the ground is too slick and she is WAY too frisky in this weather to try and ride out her nonsense. It would not have been a productive ride in the slightest. So lunging it was! She zoomed around for awhile and was actually pretty good, despite the fact that her way-too-big quarter sheet kept trying to blow off of her, and she was spooky and zoomy and distracted. When I finished lunging her, we went for a walk, and she was SO distracted by everything around her that she kept bumping into me, totally ignoring my space. That got old very quickly, and I finally walloped her one and backed her up. We went into an intense groundwork session - whoa, back up, head down, walk on, whoa, back up, head down, etc - but I never felt like I really had her attention. She was obedient enough, and did everything that I asked, but she was always focused on something other than me. It's hard to blame her for that, she is a baby after all and the weather was really awful and cold and blustery, but still. Just one of the life lessons she has to learn... doesn't matter where you are, what you're doing, or what is going on around you, you need to listen and take directions from momma. When you ask that of them, they eventually turn into total nonchalant ATVs like Pmare, Gogo, and O... I expect it won't be long before Tre starts to take the world in stride too.

Today's lunge session was similar to yesterday's in that the quarter sheet was still trying to blow off, she was VERY forward, and the weather was even worse than it was yesterday. It was sort of sleeting on and off, and it was in the 20's. Well, I guess you do what you gotta do! She was really quite good compared to yesterday, and even ended her workout with a perfect halt out on the end of the lunge line. I can't say how much hatred I have for trainers who teach horses that lunging is just running out on the end of a line until it's time to stop, and then you hit the brakes and come walking in towards the trainer. It's DANGEROUS and disrespectful. I don't want to hear any of that natural horsemanship crap saying "oh you're allowing the horse do it, it's a sign of respect" - no, you trained it to do that and it's a sign of disrespect, not to mention the fact that you're asking to either get run over or get your horse tangled in the lunge line. Then I have to explain to your poor confused horse that it has been doing it wrong all along, and re-teach it to do it my way instead. My way: I stand still in the middle of the circle, the horse goes out to the end of the circle at whatever length I give it, and it stays out there on the circle, takes whatever verbal commands I give, and is expected to stay at whatever gait/speed I have given it. I also expect my horses to walk whenever I ask them to walk - no running off, no changing gaits whenever you want. They walk out away from me and only trot when I ask them to, doesn't matter if they are fresh and want to go. This also applies to end of the work session - you transition down to a walk and walk out there until I tell you to whoa, and then you whoa out there on your circle, none of that disengaging your butt and not use yourself properly in your halt. When you whoa, you stand immobile until I come get you. It's all about safety and respect... the horse leaves my space in the beginning, and I go into her space at the end, she never comes into mine.
I know I'm anal about it, but lunging is work and not time to blow off steam running around like an idiot. A horse running around at the end of a long line doing ovals around you with the lunge line on the ground half the time is NOT safe, nor are you getting anything accomplished.
Anyway. Off my soapbox. Tre, like all of them, is learning my way of lunging and is finally starting to understand how to walk and whoa instead of hit the brakes and run in to me. She's smart, and she wants to do the right thing, so she picks things up quickly - if she can keep her brain between her ears and off of the other horses, she'll be very easy to train.

Poor O is genuinely starting to feel left out during her two weeks off. She's acting less vivacious and talkative than she normally does, and even at mealtimes when the two girls are tied up at their buckets, she finishes her meal and then just stands there half asleep with a foot cocked instead of with her usual concern with where I am and what I am doing. Normally she watches my ever move, twisting herself in half to keep an eye on me while I toodle around the barn and get out the grooming tools and whatnot. She is used to me getting her out, putting her on the Theraplate with a hay snack in front of her, grooming her, and getting some work in. Now some young punk is the one getting worked, and she is not amused. I wouldn't say she has *that* great of a work ethic, no more than any horse, but she REALLY thrives on attention and is not happy to be getting less of it than she is used to. She keeps standing at the gate after I put her out going, "what? That's it? Seriously?"
The fill in the legs legs is still the same. The legs go down when she is cold and fill up when she is warm. She's still sound and fine... at this point I think it's just gonna take some time. After all, the hematoma I have on my butt from when Immy dumped me onto a rock last January IS STILL THERE... obvious non-problematic and has been for a very long time, it just takes a LONG time for the body to reabsorb fluid from an impact like that.

She goes back to work Dec 1st... if there are any lasting problems, she goes to the vet for an US instead.

Other random things I've done today include going back through video stills of O. Found this cute one: 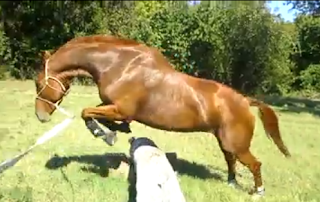 Wheeeee! She'll get there under saddle too.
Posted by Andrea at 7:26 PM