Yet another day of being trapped in my house.... I'm going TOTALLY STIR CRAZY!

Yesday, the roads were severely hazardous to drive on, but everything was still *somewhat* slushy, so I got around slowly (but safely). This morning, road conditions had taken a dramatic downturn for the worse - temps were in the teens overnight, and all of the slush/wetness had frozen solid. EVERYTHING was completely, 100% covered in thick ice. It was measured in my area to be around 3-8" thick ON THE ROADS. 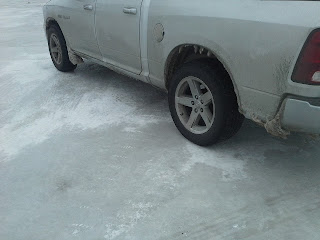 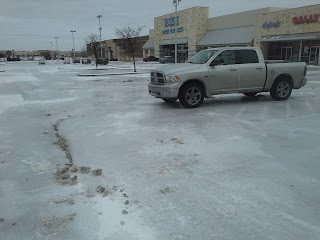 I tried to go to the pet store on my way to the barn to get cat food... they weren't open. NOBODY was open. I got stuck in the parking lot on the way out... I don't even know how I managed to get myself out of that mess.

I only made it about a quarter of the way to the barn, maybe not even that far. I weighted the bed of my truck and tried alternating between 4WD and 4-Low, but nothing was effective against the ice. When I totally lost control of the vehicle and did a 180 - in the middle of the road, on flat ground, doing 10mph, in 4WD - I decided maybe I should go home.

The neighbors were nice enough to trek over in the ice and throw a bunch of hay to the horses AM and PM. I'm gonna do my very best to get there tomorrow, but I can't make any guarantees.

This is how I spent my evening instead:

Thankfully, ABC Family has been running back to back Christmas movies all day, and I have enough hot chocolate to last me quite awhile. I feel a bit like a prisoner here though.... poor Future Hubs is stuck at work (yes, the poor man is out driving an ambulance in this crap), and I am stuck alone here with all of my similarly stir-crazy critters. This is definitely the worst storm I've seen since I've been in Texas. These are also the worst driving conditions I have EVER seen in my life.

All major freeways in Ft Worth tomorrow are being shut down for cleanup. Most of the DFW area freeways are in total gridlock right now anyway from stranded cars and accidents. I've had to reschedule everything several times already this week - we had no idea it was going to be this bad. It just straight up sucks.

Hopefully I'll get out to the horses tomorrow, but I can't make any guarantees. I'm not going to kill myself trying either... if the neighbor has to throw them more hay until I can make it there, they certainly won't die.

I, on the other hand, might die of actual physical boredom if I don't get out of this house soon...

Email ThisBlogThis!Share to TwitterShare to FacebookShare to Pinterest
Labels: weather