Time to go through our monthly goals! I feel like we had a pretty good month overall!

1) Really consider the eventing question.... to keep at it or no?
I did really think this one over, and I really do want to keep working towards that goal. What I think I am going to do is continue on with the goal of competing her in endurance, and training her for everything else. She's ready to tackle endurance competitively, she's not quite ready to take on anything else. If I want her to make a good event horse, I can't push her - I just need to coax it out of her and get her there in her own time frame. And I do think she'll get there, but she is not going to be ready to be competitive at the level I want to be at by the time the spring season starts (end of February). I think Tre will get to that point first, and so she's probably going to be the one eventing in the spring - but you never know!

2) Get through our first endurance ride alive! And look for the next one!
Success!! We did it, we made it through our first little Intro ride (15 miles), vetted in and out great and had plenty of gas to spare. I think she could have done a 25 that day and been fine. We were *supposed* to do our first LD today, but after her goofy little wipe-out coming off the trailer (she slipped on the ramp and fell to her knees), she had a solid two weeks off to try and get her lumpy knees to go down. They are finally sort of less big than they were, and she has been sound the entire time. I'm tired of her sassy fresh attitude so she's going back to work! The next ride is on the 4th of January, and she will definitely be ready for that one.

3) Continue patterning on the barrels... and try poles!
I didn't do this, mostly because she was off for half of the month... mostly this is just for fun, so it's not really a set goal! But the poles are set up now, so it's time to play :) I did them with Tre the other day too!

4) Chiro adjustment! She hasn't needed anything so far but it pays to be proactive!
Success! The chiro didn't find much on her, just some things to adjust in her neck/poll and some mild things in her asymmetrical SI region. She feels the same after the adjustment, and looks the same, but it's good to be proactive.

5) Continue long-lining, all over the place!
Again, didn't do this because it's a) just for fun and b) she was off for two weeks. Along with the barrels and poles, it's just some fun stuff to do! 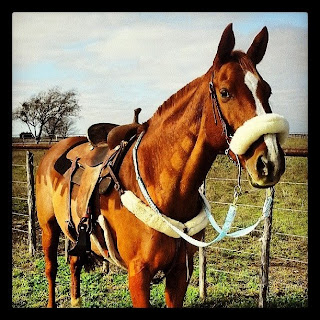 It was REALLY nice to get back on her the other day. I missed riding her!

1) Get going under saddle.... good behavior, w-t-c!
Success! She has gotten better and better over the course of the month, and is starting to do some halfway respectable dressage work. She is quiet, but can get a little frisky and forward sometimes. She tends to fuss a little at first during her ride, going a little slow and not wanting to really take her contact, but if you warm her up and then take a contact for her and bump her forward into it, she will reach out and take it and stay there. It will take work and finesse, like it always does, but I actually think she is going to be pretty uncomplicated here.

2) Trailer out to a few places... behavior in the trailer and at the places we trailer to!
This one we didn't do, but I don't count that as a failure - she is ready to start going places, I just chose not to because the place I want to go (the local arena that has a very small covered, versus WD which is HUGE and far away and spooky!) was flooded out at the end of the month. But we'll be going soon, she is ready!

3) Start going out on trails with a buddy.... work on being a good girl!
Success! I just wrote about our first trail ride and how AWESOME she was... I'm also starting to ride her out away from the barn by myself... not very far, and not very fast, but she is starting to learn how to go out by herself. We will be doing A LOT of this in the coming months!

4) Tack... try to find some things that actually fit her tiny shrimp size!
Success! Or well, I at least was able to determine that pretty much nothing fits her all that well. My saddles fit pretty well, and I was able to fit her to a bridle and martingale on the smallest holes, and she can wear my smallest pair of bells, and polos of course... but hardly any of the boots fit her, all of the bits are too wide for her, and I've had to borrow all her blankets. O is just over 15.1, and Tre is just over 15.0, but Tre is seriously half the size of O in almost every way. She fits into a pony bridle and a 70" blanket!

5) Put on some weight and muscle!
Success! I think that management is going to be critical for this horse and her gastric health - with her little dewormer incident, her weight fluctuated, and I think if she gets heavily stressed it will throw her system into some disarray. Yesterday she was bouncing around when I had O out for her ride, and I couldn't get her to eat much hay before our ride (I always try to have a little something in them before I go and slosh their stomach acid around with a ride). She was excellent under saddle, but then later that afternoon wouldn't eat all of her dinner and wasn't eating much hay either. Whether or not that has ANYTHING to do with it, I played it safe and gave her a dose of Ulcergard. Today she is just fine, voraciously hungry and eating everything in sight. As long as I stay very, very proactive, I think we'll be fine, but I'm going to always have to err on the side of caution to keep her healthy.


I didn't think she had really gained much weight or muscle in the past 6 weeks, but then I put these two pictures side by side, and she actually did! 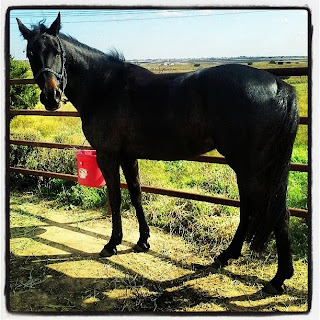 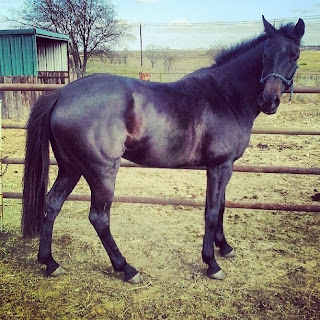 She was NOT being cooperative for these pictures... she was very distracted by the other horses and had absolutely no ability to hold still and focus. She's in heat (so is O), which might have something to do with yesterday's appetite fluctuation. My guts feel super crappy when I am all hormonal, so it's not that much of a stretch to think that they go through something similar.


O-Ren December Goals:
1) Work on fitness - prep for the High Roller ride in January!!
2) Work on improving the canter - work on the lunge and progressing to work under saddle
3) Dressage work - progress in training as well as compliment fitness work
4) Fun stuff too! Barrels/poles/driving/etc!
5) Make sure all tack/boots/etc are squared away for higher mileage rides - everything needs to be chafe-free!


Trebuchet December Goals:
1) Continue w-t-c dressage work, really push to get her going!
2) Trailer out to other arenas! Behavior at other properties, behavior on the trailer!
3) Start jumping little things! Small grids, pole work, until she builds up enough muscle and strength to handle more complicated things
4) More trail rides! Trail ride all over the place!
5) Start to introduce to little ditches, water, banks, XC obstacles!

Speaking of in heat, here is O and her buddy Coy playing sexy playtime over the fence...

Email ThisBlogThis!Share to TwitterShare to FacebookShare to Pinterest
Labels: goals