Hooray, Icemageddon 2013 is finally mostly over! My yard and driveway are still covered in several inches of ice, but all of the roads are clear, and it was in the 40's today. Hopefully it will continue to melt over the next week or so.

It hasn't been very much fun being trapped like rats in our own homes for the past 5 days though. This is what we've been doing to entertain ourselves. I know, I know, that outfit.... at this point I have a PhD in layering, even though it makes me look a bit like a hobo Eskimo. Can't say we're not innovative about finding ways to have fun in the dismal weather though!

Thank GOD, we finally managed to get by Tuesday. The city of Fort Worth finally decided on Tuesday they they should probably do something about the several inches of ice still on the roads, and were laying down salt on the bridges and blocking traffic for HOURS. Yes, it really did take them five days to figure out that maybe they should try to make the roads passable, since the sun was not coming out and the ice was not magically just going away. I lived in the Great White North for 25 years and I've never seen anything like this. It was absolutely insane.

Tuesday morning, I had had quite enough of staring blankly at the walls of my own home (seriously, what do homebodies do all the time? I need to be outside, I can't live in a building forever!), and made it to the barn before I had to leave for all of my make-up appointments (seriously, being iced in will RUIN your tight schedule). It was absolutely bitter cold, even by northern standards - my truck said it was 16 degrees. My trailer tack room door was frozen shut, so I had no way to get to my tack, but I still wanted to ride. I hadn't been on O in over a week, given 1) the dog attack, 2) the truck mishap, and 3) Icemageddon. It was 16 degrees and the horses were all spinning around like tops. Hmm, what to do?

S and I were tired of sitting sidelined, and we decided to go anyway. We hopped on our horses with their blankets still on, S's horse in a simple snaffle and O in a sidepull/halter. Lucky for us, both of us have exceptionally chill and awesome horses, and jumping on with just their blankets on and halters when it was only 16 degrees out and neither of them had been worked in a week was no big thing. 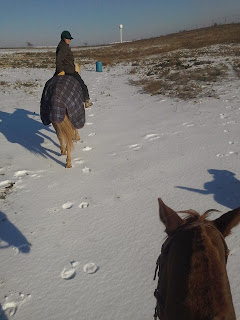 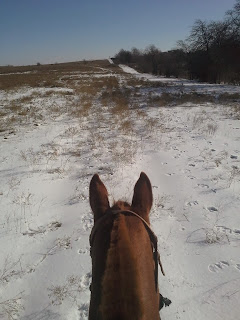 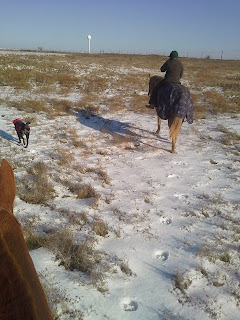 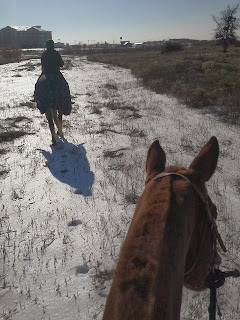 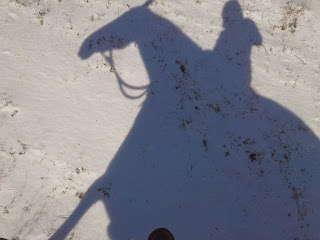 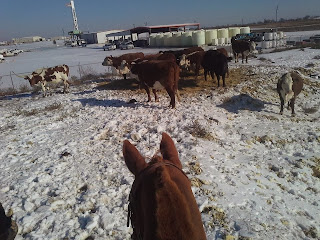 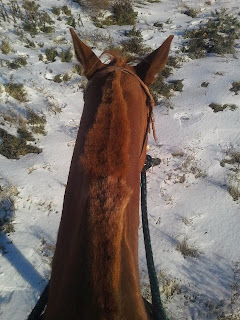 Omigoodness, when it warms up, MUST DO SOMETHING ABOUT FUZZHAWK.

I tell you what though, six months ago I could DEFINITELY not have ridden this horse on a 16 degree day at all, much less on a 16 degree day with no saddle or bridle, after a week of no work, through a huge wide open field, right up to a big herd of cows. She's such a cool cucumber now that I can do just about anything I can dream up.