Edited to add: people keep ask if I am selling Pax. The answer is, maybe, I don't know, possibly, or maybe not. But I am not interested in discussing it. There are things you just don't blog about without fear of being crucified, and changing your mind about selling a horse is one of them. So, we are not discussing this right now, because I don't want to be violently flayed open. I've learned a few things over the years - don't discuss selling, don't discuss breeding, don't discuss OTTBs. I think everything else is fair game but I may be wrong there. Blogging is kind of a terrifying and uncomfortable process sometimes.
-----------------------------------
I had a whole long post written up last month about goals - and then just now realized I never actually finished it. Such is the life!

For the moment, I am just going to set out October goals for Dylan. The retirees and babe are doing nothing for the next few months, just eating and having a good time. I have no definite weaning goals for Pax - P will wean her when she gets tired of her. I have no qualms with leaving a babe on her mother for as long as it takes. I regularly take Pax out away from P, and vice versa, and they are quite fine. As the weather cools, I will start teaching Pax to pony off of O - I think her extreme rearing days are mostly behind her, so hopefully she does not kill me when I start to do this. O's one main remaining show for the year is the last playday of the year, should we decide to go. I think we will go, they really are fun despite the politics. O enjoys Hauling Ass and whipping around things, and so do I.

My main goals for the next few months will probably center mostly around Dylan and getting us both back in shape for the upcoming show season. I am getting stronger every time I ride, but I have a long way to go before I can sit the trot again without looking like a ragdoll having a seizure. (Seriously, it used to be so easy... where have my muscles gone!?) Dylan has put on 75+ pounds since he moved here, and he looks really good. He has had no problems at all following his deshoeing, and has totally mellowed out being outside 24/7. He is off all hard grainfoods, is barefoot, and is out all the time - and he looks and feels great. I intend to keep him this way throughout the duration of my time with him.

Dylan October Goals:
1) Continue gaining weight and muscle and be a happy healthy feral beast outside!
2) Get his teeth checked/done
3) Start trailering to WD - 2x a week if possible!
4) In addition to working at home, hacking out - 1x a week in gradually increasing amounts
5) Start looking over the show schedule and making tentative plans

I renewed my membership to WD for October, which is great - it's only about a 20 minute drive from our new house and therefore completely reasonable to make. Their footing really is the best around, and you can't beat having a covered arena for all seasons. (It never gets cold enough here for true indoors).

As for riding goals specifically - mostly they revolve around just getting my strength back. Dylan has all the buttons and they are easy to push if you are sitting correctly and are able to access them - but you have to be a strong and sufficiently correct rider in order to make that happen. As I get stronger, we'll be increasingly capable of doing more and more things - but I have to get there first, and the only way to do that is just spend time in the saddle. 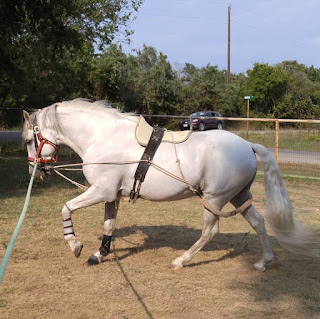 He really has put on quite a lot of weight. He looks like a different horse already - and he shines, even though he is solidly grey. I may not be good at many things, but putting weight and shine on horses - I got that covered.

Email ThisBlogThis!Share to TwitterShare to FacebookShare to Pinterest
Labels: goals