It took 6 months for me to really be able to see it, but yes, Pax does in fact trot and it's pretty cute!

I saw her trotting a few sproingy steps the other day that were beyond just her usual bouncing around. Her preferred speed is canter for sure, so I know exactly what her canter looks like (also cute), but not her trot. On a whim, I decided to see if I could get her to trot out for the camera. I've never taught her this, but by now she leads very well, so I figured it was worth trying.


I've been taking her out every couple days, tying her to the trailer, and grooming her. She is a very good baby and she stands like a little rock, totally nonplussed by this. The rest of the horses get very upset when I pull her out, but it doesn't bother her one bit. I lead her around in increasing amounts after I groom her each time, and she is happy to leave all the other horses and head out. She never wants to go back into the paddock either - she always balks at the gate and doesn't want to step forward. That's the kind of ethic I like to see!

She does still act the fool sometimes when being led - if something spooks her, she definitely is liable to leap around, scoot, rear, and strike at the air like the Black Stallion. She gets better about it every time but she hasn't quite yet connected the fact that work time does not equal play time. She will get there - she is only 6 months after all. She hates to be reprimanded like any kid, but she does respond, especially when she does it to herself like galloping off and hitting the end of the lead rope.


I set up my camera and tried to see if she would trot - and she does! I haven't taught her this but she seems to understand the basic concept of go-with-the-human, so she was happy to jump right up into the trot every time I jogged forward.

I have a clip of the video in slow-mo too. Caveat: I did not think the idea through in advance and therefore didn't even have a bra on. I was basically trotting down the road in my pajamas with no underwear on. Sorry about my flopping boobs and SUPER classy outfit. I'm pretty good at putting together a Walmart-worthy barn outfit, I'll say that about myself.

You can see why I think she'd make a cute hunter though, with that very flat-kneed floaty trot.

Today we tried something new too: ponying! 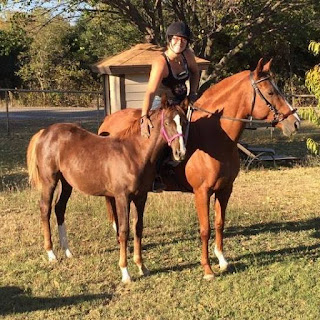 She was actually quite good, better than I expected. She still had plenty of bouncing, rearing, and acting goofy, but since O is big and strong I could just kind of pull her along and stop the nonsense. She eventually started to get tired and began dragging behind a little bit, which is when we called it a day. We were out walking around the front yard for maybe 10-15 minutes.
I don't think I will be ponying her again until we stop the rearing nonsense while leading. She is still just a little babe too and while I think these lessons are important to learn early, there is no sense in overdoing them. But it will be very handy for the future, as I will be able to pony her out on O for trailventures and experience. Plus, if I am to make a pair out of them in the future (if I don't sell her, of course), they will be working together a lot.

O thinks Pax is a giant annoying pest but she clearly was delighted to be smooshed up against another warm body. Pax doesn't seem to care whether or not she is near the other horses, but O does - O LIVES for her herd. She can't function without it. Having a herd member there next to her all the time will probably multiply her happiness tenfold. She goes out and drives alone with no issues, and can pass by other horses without freaking out or getting herdbound, but I'm pretty sure if she had her way she would never detach herself from her buddies.

Pax does seem to have inherited P's personality, which is what I was hoping for - with the added bonus of being really, really friendly. She always comes right to you in the pasture, she wants attention, she likes to be groomed and messed with. P can't be bothered with any of that, so I am super pleased that Pax likes all of it!