Explanations and Other Things

Blogging is a wonderful, magical, excellent, and sometimes completely miserably terrible thing to do with one's time. It's very akin to having your own cheering squad and your own execution firing squad all at the same time. I learned long ago when blogging about Gogo that there just are some things you *don't* talk about when blogging. I, for one, will never open my mouth about OTTBs again - I was so thoroughly berated for my views on them that I decided the topic was 100% taboo.  Another topic is breeding. Inevitably, when you talk about breeding, you will get scores of people who are all too happy to tell you what a piece of crap your mare/stallion are, what an irresponsible choice you are making, and what a terrible person you are. Likewise, I also just found out that if you take the resulting baby following such a breeding, and you consider changing your mind and listing it for sale, you will get attacked by that same faction of people.

It started out as a well-meaning comment. Someone was curious to know if I had listed her myself or if someone else had stolen her information and listed her without my permission, because they had found the ad and didn't think I had planned on selling her. Unfortunately what happened when people saw that comment was a huge email explosion - people left and right flooding my inbox, telling me I was irresponsible, that I didn't care about my horses, that I was a greedy money-loving hog who was just here to make a buck, that I was a trashy backyard breeder, that my horses were garbage that nobody sane would buy, that I should be ashamed of myself. I'm sorry if I got defensive about it - I was really taken aback, and hurt too. It's literally exactly the same responses (and the same people) as I had berated me before for wanting to breed Gogo back in the day - they are the reason I didn't blog about planning to breed P, and why I probably won't blog much about planning to breed anything in the future if I decide to do so. I know that their from-behind-a-computer-screen opinion doesn't actually affect me in the real world, because they're not the ones here making these decisions, but still. I'm kind of a softie and I don't like getting jumped on for something I had no intention of talking about in the first place.

I bred her specifically because I wanted a fancy, flashy moving, upright-built dressage-type baby. That's always what I had in mind for her. I spent two years picking a stallion that I thought would stamp her well enough to deliver that. And I did get a beautiful, well put together baby.... who moves like the flattest kneed hunter you ever saw. She screams hunter. I am hoping she gets a bit freer in her shoulder as she gets older, but she may not. As such, perhaps her talents are in that field, and that is not something I am interested in. My hopes if I keep her are to still pair her with O so I can use them as a team together, but she will have to match O's size and movement if that is the case.

I also may breed P once or twice more before she is fully retired. Dylan is actually the stallion I was going to breed her to before I picked DDM, because I thought he would improve her movement the most - now I have breeding rights on him should I choose to use them. I also am still very strongly considering breeding her to Lasting Impression, who is Gogo's full brother. He is still sound and going in his 20's, and was a GP horse. THAT baby would be the keeper. Absolutely no doubt in my mind.

I don't take bringing new lives into this world lightly, so I gave P this year off for sure to just rest and work on feeding Pax, while I consider all my options. I'm not here to breed crap and garbage and I'm not here to make money from this. I want to weigh all my options carefully. I want to produce only nice, sound, sane things that can go on to good lengthy careers, either with myself or someone else who loves them just as much as I do. That's all I'm trying to do here.

So, yeah. Basically that's the story. Please stop sending me emails telling me that I need to kill myself because of what a crappy person I am.

Anyway. Back to what we've been up to.

I set up a schedule for Dylan's October workouts - it's nothing insane at this point, it's mostly just for my benefit so I can strengthen up and be a good solid rider for him. I renewed my membership to WD and plan on trailering him over there 2x a week. I also will hack him here at home 2x a week. Every ride I get a little stronger and it feels so good. My bad ankle/calf is holding up well and my hips are fine. I don't think I will ever regain full flexibility of that leg though... I can't force it to happen any more because there is just a limited length that it stretches. I'll keep working at it, and working at it. But I may have to accept that I might not be able to ever cram it into short stirrups again.

Dylan lunged last Thursday, went for a hack last Friday, trailered to WD on Saturday, and then had his teeth done on Sunday (and had yesterday off because of that). He went out totally alone for his hack - this was a first, and I wasn't sure how it would go. I was prepared for him to be a noodle head, seeing as he was a noodle head the last time B and I rode them out through the neighborhood, but actually he was wonderful. He gets his giant washing-machine walk going, where you feel a bit like your stomach is going to be sloshed right out of your body, but I think complaining about a forward walk is just not something you should ever do. I rode him in the LG too, which is going to be great for trail rides. 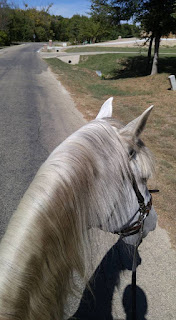 I'm also *hoping* I can grow more mane on him than this. It's a bit pathetic! If I'm going to have a hairy horse, then damnit he better be a HAIRY horse. 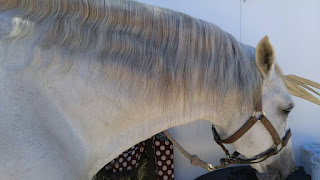 On Saturday, we went to WD for the first time. I don't have any pictures of that unfortunately, seeing as there were a bunch of people XC schooling and I had a very hot and screaming stallion to deal with. I think this is just kind of the way he is - the first time he goes out somewhere, he has to be all manly and screamy and prancy, and then once he has been there he chills out. He yelled and screamed for all he was worth, but aside from a few dancing prances he was otherwise really very well behaved. He stood tied at the trailer (mostly still), rode quietly (and very well!), and then stood to be hosed off at the end. Every ride gets a little bit better with him - I think I am just sitting straighter and stronger. We weren't doing anything fancy by any means, but had some nice trotwork, a few good mediums, and some flying changes tossed in here and there. When he gets bothered or confused, he gets a sideways piaffe thing going, and he has almost none of that going on that day. Although he did get really hot and bothered by the mirror and tried to inch over there every time we passed it..... ah well.

Sunday the dentist came. She is the one who did P and O last year, and I was really happy with her work. She flies in from up north a few times a year to do the rounds in Texas, so we made sure to get on her list. Both P and O had minor work done - compared to P's MAJOR work done last year. O was a little bit crooked and off, which didn't surprise me - she bends super well one way but not the other. Dylan's incisors were WAY super long, which was taking his molars out of occlusion and giving him very limited lateral movement in his jaw. I figured this would be what we would find, and it was.

Following this, O, who is hyperemotional at best, decided that something changed in her life, so she was going to die. I actually posted this status on Facebook the following morning:

"Sorry to my entire neighborhood who had to listen to the operetta happening at my house all night... O is too hyperemotional to eat after she gets worked on in any way (this time, teeth), so all night she kept wandering away up the hill looking for wolves to pick her off because she is convinced she is dying. Which sets Dylan into a total galloping screaming frenzy because she is the only mare he could ever love on this whole planet and she must be convinced of his love so she will come back and not kill herself.
I know I for one *loved* listening to that all night long..."

When I went out to feed them that morning, O was lying flat out next to Pax, rolling her eyes up at me in despair, playing a Sarah McLachlan album, asking me to read her will and testament. She was *sure* that she was going to die.

Luckily, the second the haybags got filled, she jumped to her feed and started gobbling, all traumas of the previous night forgotten. Mares....