Merry Christmas!! I didn't do my customary Mare-y Christmas post because I was busy in Florida being harassed by my family, but the sentiment was still there in my mind. Next year I plan on being here for Christmas, which will make for more fun horsey Christmastime posts. 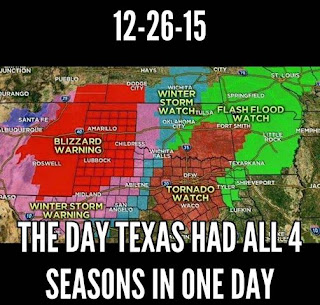 While I was away in Florida, I was warily watching our weather back in Texas. We had been in this amazing holding pattern of 70's and beautiful, every single day, and it looked like we would have record high temps on Christmas. Even in Florida, it was nearly 85 on Christmas, which is pretty warm even for there. The day after Christmas, the weather in Texas fell apart, and I watched from a distance in horror as our nearly 80 degree humid and hot temps spawned 11 tornadoes in the Metroplex, killing 11 people and completely leveling houses down to bare foundation. I know at least one of those tornadoes was rated EF4, one of only two tornadoes since 1950 to achieve that rating within the Dallas area. Tornadoes go through the Metroplex all the time, that's nothing new, but one of these in particular spun right up our main artery freeway, killing people all along the route. It was awful.

Meanwhile back at my house, the 80 degree weather suddenly dropped thirty degrees and a downpour began. B2 and her husband were amazing and went to my house to blanket all of my poor beasts, who were surely a bit shell-shocked from the abrupt change in weather. We flew back in yesterday ourselves, and actually had to be re-routed through Corpus Christi, which is waaaaaay down the coastline if you don't know Texas geography. It's about 450 miles from here, if that gives you an idea of the distance. It doubled our flight time, but at least we made it without crashing in the midst of a giant storm. There were still tornadoes being produced on the eastern side of the state as of yesterday evening. As for us, it was steadily raining with a temperature hovering around 45 degrees... which is unpleasant.
Zuul earned 50 gold stars yesterday though for being a champ and learning how to wear a blanket for the first time! I honestly wasn't sure I could get one on him, but he has that super fine zebra coat and was definitely wet and shivery. Oh well, no time like the present to learn...! I caught him, tied him, petted him for a few minutes, and then introduced him to the blanket. Not surprisingly, he shot to the end of his line a few times, but after a few minutes he realized it was not going to eat him alive. I first put Pax's 60” on him, but it was just comically huge on him. I had to actually go to the store on a Sunday and scour the racks for anything that might fit him. The only thing I found in the whole store was an Amigo foal rug that was a 54”. I guess everyone else had the same idea I did. Thankfully, I went back home, tried it on him, and found it fit! He didn't even kill me when I put the belly band on him – I was a bit worried about that but he managed to hold it together. Admittedly, his ego may be suffering a bit from the purple/pink combo though....

MEANWHILE AGAIN, while the severe weather was still ongoing in the east, on the WEST side of the state there is currently a gigantic historic blizzard going on. The panhandle got totally hammered and I saw some pictures of drifts nearly 10 feet high. So right behind these killer tornados was a killer blizzard. I mean come on Texas, REALLY?

I woke up at 4:30am this morning because I heard Dylan calling to the mares. I looked out my window and saw....

Several inches of it, and more coming down with every second. What the actual #)$*! 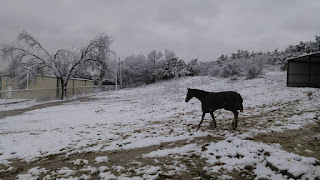 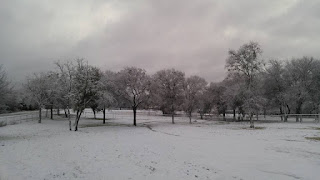 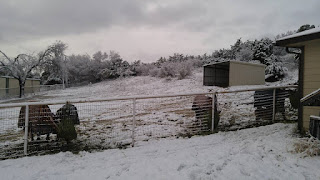 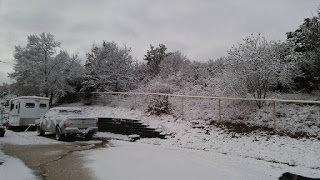 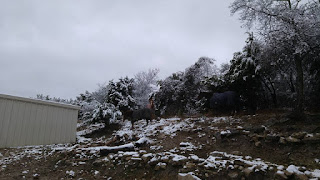 Thankfully the snow let up within short order. I really wanted to take O out and go sledding with her, but the ground wasn't firm enough for it. I am definitely going to get a little toboggan though and save it for these kinds of occasions... I wanted to do it last year but I never got to. We may have one or two more bouts of snow over the course of the winter, so I may get lucky yet!