To say I know all that much about zebra hybrids is just a laughable joke, but I do know a few things that I'd like to share with you before we get started on this journey.

A zebra is a wild animal. They can be mean, they can be aggressive, and they can jump out of any fence you put them behind. You can tame them down with a lot of work - if you take them from their mothers and bottle feed them is your best shot, as I understand it - but basically it boils down to the fact that this is a wild thing who, unlike horses, has not had countless generations of domestication behind it. Yes, a feral horse will act just as wild and crazy as anything.... but it would be similar to trying to tame a feral dog versus trying to tame a feral wolf. They're just not the same. People own them, and ride them, and do stuff with them, but I think it all boils down to this: these are NOT pets. And I don't know why anyone would want to keep them as pets. I think it's nuts.

A zebra hybrid is obviously half a zebra, so it has half a wild thing in it. If you cross it out with a horse or a donkey, it will take on some of the traits of the thing you crossed it with, so you will get a bit of both behaviors. Just because you crossed it out with something domestic doesn't mean that now you'll have a sweet and cuddly tame beginner-friendly creature. So if you're ever thinking "aww, it's so cute! Those stripes!," I totally agree with you, but I can't say I'd suggest going out and getting yourself one. Unless of course, you're a crazy person and a horrible bleeding heart like I am who decided to give it a shot for some reason. This zonk was pulled out of pen and gifted to me by a client - and that's why I have him. Not because I thought he was cute or adorable or interesting or whatnot, not because I went out and looked for a zebroid, but because I was presented with the opportunity, I considered it, I understood what kind of challenges I was up against, and I was willing to give it a shot anyway.

These guys are super hard to work with. And I fully expect this to be a serious challenge. A fun, rewarding, exciting challenge, but a challenge nonetheless. And I may not be successful in making him into anything useful, or it may take me AGES to do it. But I'm going to give it my best shot.

So far, in the four days that I have had him, I've gotten my zonk to tie, lead a little bit, be petted on both sides of his neck, take hay out of my hand, and then actually approach me to take cookies. (Caveat: I am not a regular treat-giver. I think it makes horses annoying and spoiled. But, I think with my zonk not having any positive associaton with humans whatsoever, associating human interaction with delicious snacks will change his attitude about it.) He is extremely smart, like I figured he would be - he thrashed for a minute when first tied, and then quit and stood still. I've found for these more-or-less feral longears that it seems to work better if you teach them to tie *before* you teach them to lead - then they figure out the idea of yielding to pressure of their own accord, and unlike a horse they won't thrash until they break their necks. They don't panic - they stop and figure it out. But they are quick as lightning and sometimes they will do something that surprises you, so you still need to use caution. I got jumped on by a standard jack this spring and he really hurt me - out of nowhere he just launched himself right onto me, landing in the middle of my back, He gave no warning, other than the fact that we knew we were taking on a potential risk by restraining him to work on his (extremely long and needing hacksawing) feet. I have a healthy respect for these guys and the things they can do if they feel cornered.

I got him to eat some hay out of my hand yesterday for the first time, and today I upped the ante and introduced cookies, which he took from my hand. I also left a few carrots in a bucket for him the other night, hoping he would try them and decide they are tasty after all. Now that I have found something he likes to eat, I think I will make decent progress with him. I'm not all that big on handfeeding, but I think it will help create a positive association with me. He does seem to already recognize that I am the food lady (he is just eating hay), and is getting increasingly pleased to see me when I am going about filling his haybag. 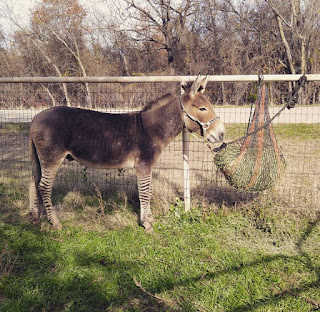 But he is sloooooooooow about things. Like, take a wild donkey and double the time that takes kind of slow. I stood there on Thursday morning holding a big bite of hay out to him before I gave him his breakfast hay, and it literally took him at least 10 minutes of just standing with his nose about an inch away from the hay to actually take it from me.

He is now letting me walk around him without losing his mind and tearing off, which is a huge improvement. I can step in and pet him too, although he doesn't like it much. Today all I did was just feed him cookies, which definitely improved his attitude. With the help of the cookies, he actually came up to me of his own accord for the first time. Like I said before, I'm not a treat-er, but I think that he will have an easier time linking positive feelings to me if there is something he likes involved. Longears like to know what's in it for them - they want to know why they should bother doing something. If there's something pleasant involved, they're more willing to try it. They don't do so well with the pressure on/pressure off system that works well with most horses . Or at least, that has been my observation with them. With longears, you kind of have to throw away the Horse Training 101 manual. It's just a whole different thing! 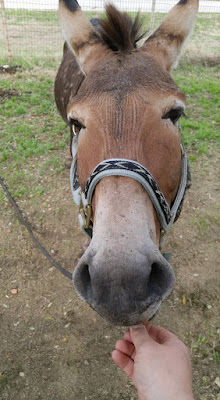 Mmmmmmmmmmmmmcookies. This felt like a victory - having him actually turn and look at me like I was interesting, and actually coming towards me of his own accord to take the cookies.

I was thinking I should make him his own Facebook page to post daily little updates in blippets, seeing as there probably won't be any huge exciting updates ever beyond "day X... petted him." I quite imagine he'll take a long time. What do you think?