Yesterday I made up a comparison post for both Darby and Dylan. Since they were the two adult horses who came into my life recently, I wanted to put some side-by-side pictures up to see what they looked like when they first arrived, and what they look like now.

Dylan was a little thin when he got here, certainly not emaciated or anything but he was a little scrawny looking for a mature stallion. The trainer had had some issue with getting decent hay, and he had lost some condition because of that. I fretted quite a lot those first few weeks that I had him, because he had been in a stall nearly all of the time due to his incessant fencewalking. The fencewalking caused the pounds to just melt off of him at the trainer's facility, so she kept him in. I was determined to get the fencewalking under control, and think I have done a good job there. He walked himself into the ground for the first week or two, and then he quit, and despite his very active nature (he is always going round and round his pasture, grazing a bit here, eating from his haybag there, wandering around patrolling), he has steadily gained weight and muscle. If I ever get my body *properly* under control again under saddle, I expect him to build even better muscle.

Darby has obviously had the really huge change. When I brought her home in June, I thought she was going to die. I thought maybe she would have a few good weeks, and then we would put her down. She was dead lame in both fronts, having abscessed badly in both during the spring. Because of his badly she abscessed, and how that affected her mobility, she was struggling to get to the haypile and get enough calories despite eating a lot of grain. Most of the time she just stood immobile, or laid down a lot. She was very, very thin - not a skeleton, but definitely about a 2 BSC. When I took her, I really did think she was going to die.
Well, she obviously didn't die, and steadily piled on the weight. Despite her extremely advanced age, she is currently maintaining it all exclusively on hay, so she must have enough teeth in there to manage well. She struggles when mud gets packed into her feet and hardens - her front feet are pretty much always going to be a total mess due to the number of times she has foundered - but as of late she has been doing totally fine. Given the fact that I expected we were going to have to put her down in early winter due to the mud, which very nearly killed her in the spring, I am totally pleased and surprised to find that she is doing as well as she is. If it ever dries up enough, she can go back to her boots if she is having trouble with comfort, but her feet actually look really great right now (for her) and she is getting around just fine. Despite all of her problems, she has survived - flourished even. 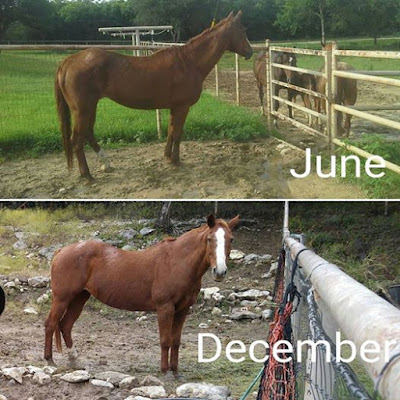 Now I'll have to get a comparison for Uma.... although babies change so much, it's hard to say what they'll look like from one day to the next!

Email ThisBlogThis!Share to TwitterShare to FacebookShare to Pinterest
Labels: comparisons