Rainy grey days are made for... RIDING. I don't know about you, but when I put my mind to it, even the yuckiest of days can't stop me from getting in the saddle.

BUT, I will admit that sometimes it is a struggle. It's so chilly and grey and cold out, complete with alternating mist and rain.... who doesn't want to shut themselves up on a day like today in their warm house with fluffy pjs, a fat lap cat, and a steaming mug of tea?

It is tempting, always tempting, on days like today. But I am well aware of the fact that the horses aren't going to work themselves, and that winners are not slackers. It wasn't full-on raining this morning, so I decided that I better get Tre done first, before the weather changed for the worse! It was howling wind and freezing cold, so I opted to just lunge and not get on. She needs time with the saddle on doing low-stress things, so lunging down near the barn where she is comfortable is a good place to start. I did the same thing yesterday, and she was so uppity that the previous looping of reins under her stirrups did nothing for her - she just raised her head as high as she could and ran. Today, I figured I would try something different... one old elastic training fork and one blanket strap later, I had created a mini-martingale for her. (Afterwards I rigged up some baling twine to hold the whole thing up.... I win the award for most innovative cheapskate out there!)

At first, I clipped the fork to the bit and looped the reins under the stirrups again (the fork has snaps). That didn't go so well... there was running.... 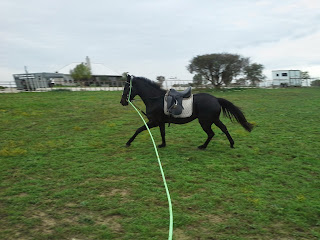 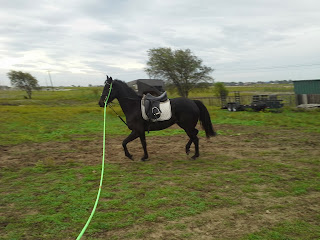 And ducking behind the vertical.... 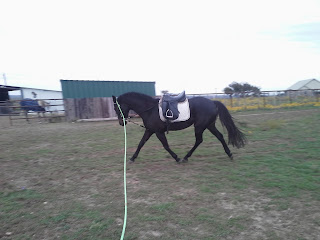 Well that's no good. I stopped her and tried again, this time attaching the fork to the reins like your typical running martingale. That went MUCH better! 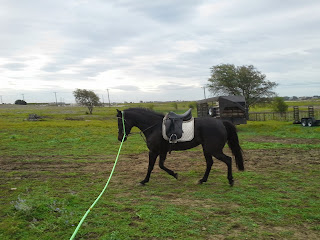 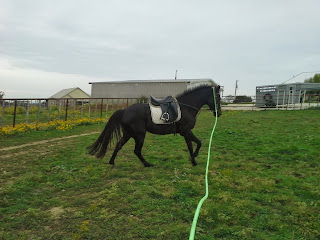 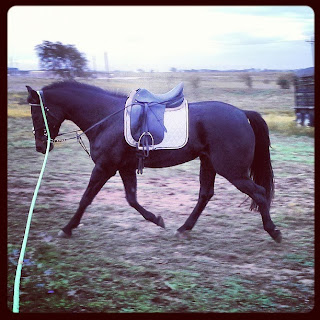 Working down by the barn near her friends is probably our best option for the time being. She is very focused on the other horses when you are on her (not when you are lunging, interestingly), so that might help her mentally. Right now she just needs good experiences and consistent, quiet rides. On a nasty day like today, it's not worth it to get on.

It started raining steadily just as I was finishing with Tre, so I decided that O was probably going to end up with the day off. She lunged yesterday for 45 minutes, motoring along at a fast trot without so much as breaking a sweat the entire time - I still wanted to ride today, but figured that it was not the end of the world if it didn't happen. Luckily for me, when I went out to feed dinner there was a break in the weather - I didn't have much in the way of daylight, but I decided to saddle up anyway and head out for as long as I could!

"As long as I could" ended up only being about 1/2 an hour before darkness and rain moved back in. I've been trying out apps on my phone to see if I can find one that I really like... none of the really good ones are made for Androids. I have one from WoofWear that is decent, but it only records rides and gives you the readout after the fact - I can't check mid-ride and see my speed or how far I have gone, like you can on Equitrack (for iPhones only). Oh well, better than nothing for now... but any suggestions on a better app for Androids would be appreciated! 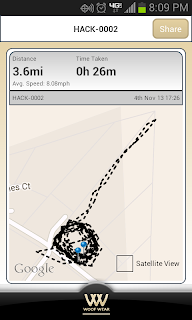 Obviously I didn't go very far, with the darkness and rain setting in... I stayed in the upper field except for one loop out to the far pasture and back. We long trotted nonstop for the entire half-hour (I know, when did I pick up the term 'long trot'....), which isn't much for either of us - sometimes it surprises me how easy it is to just set the cruise control and post to infinity. I can't run a quarter of a mile, but I can trot along for ages! Obviously the mileage isn't impressive, but I am pleased that I was able to get an average for her regular trot - about 8mph. She could easily kick that up to 10mph and still be at comfortable cruising speed.
Our ride this weekend is only 9 miles (with an additional 6, if we feel like it), which, if we were rolling along, we could do in an hour. I figure it will be more like 2 hours - I don't know what to expect from this set of trails since I've never been there, but I was told they are nice and easy. I also think I am going to choose to do the ride the barrel saddle after all... I am most comfortable posting in that for a really really long time, given my calf problems. Some of those big wide endurance stirrups are looking really tempting right now....

Also, I tried M's hack on her, and she liked this one! I think it had more stability to it, so it didn't send her into a tailspin every time it jiggled. She was happy to just motor along on a long loopy rein, and I had plenty of whoa and steering. 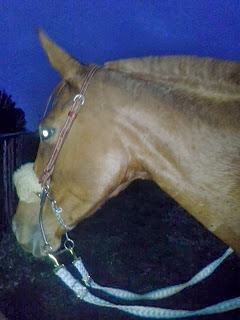 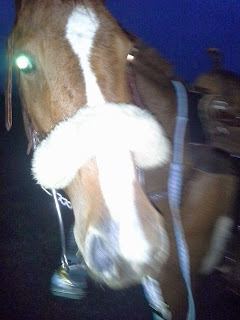 It was raining in earnest by that point and she was not amused. She got pretty bored just trotting around and around and around in circles, but a quick loop out to the back field perked her up again. She will definitely be happier out trotting on the trails, where she has things to look at and friends to be with.

Now I feel as though I deserved my hot mug of tea, pjs, and fluffy lap cats!
Posted by Andrea at 7:52 PM