(Kids of the early 90's, you'll sing that title along with this classic commercial.) 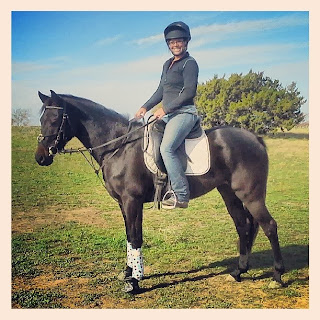 Omigoodness. Is Tre not precious. I just want to squeeze her.

She is doing REALLY well. She put all her weight back on and then some, and looks more like a horse now instead of a scrawny waif. This is the first picture I have of me riding her, and I'm happy to see that I don't look like a giant Amazon lady despite her diminutive size (just over 15.0). Although over the course of the year I have packed on 15lbs, so I should probably do something about that... I'm not happy to see that it's starting to show in my big fat belly! Don't laugh at my jeans either... I didn't have any breeches with me, and my calf has been giving me serious hell whenever I have tall boots on, so I've just been taking the simple route and going with just the jeans and my ropers. Poor dressage saddle, I subject you to so much torture!

She has graduated to a proper normal running martingale - I managed to shorten my schooling one to an appropriate length for her. I actually could lengthen it a few holes, and probably will, but it is good to have options. She does need one right now as a 'just in case' backup, but I doubt she will for long. The girl is mellowing out and getting more and more mellow every day. She is QUIET. It's actually a nice change from O, who likes to go go go. Tre likes to just dink along in her little dinky dink trot, and lope along in her la la lopey lope. (That's a QH for you! Funnily enough, she is race bred on both sides... obviously that didn't come through very well in the breeding!) Now that we are cantering, it's just really nice to sit there and put my leg on instead of have to give 9573298739293 half halts all the time like I do with the freight train woman!

I hadn't posted this before I don't think, but this is Tre cruising around a course last year with her old trainer:

She can jump eh?
The draw reins kill me though... why would you jump in those!

I've had her for exactly a month now... we had our little week of crappy downtime, and a week of just handwalking, and a week of just lunging, so I've only really been on her about four times. She has really chilled out so much... I was cantering big circles around in the field today on a light contact and she was steady and quiet. We even trotted up to the top field (where she historically has been very spooky and herdbound) and she was fine. Go mare!!

As for Miss Perfect Queen, we went to a local H/J show yesterday and just CLEANED UP! It was a small show, and there weren't many people entered in our classes, but it was great for her to have to go and deal with cantering around with a group of horses. We did the in-hand classes, won them all and were the Mare Halter champions, and we did a showmanship class where we sucked pretty badly (okay well, I sucked because I don't have any idea how to do showmanship and the judge was looking at me like I was a crazy person!) but we got second in that one too. Our under saddle classes were supposed to be all walk-trot, but we opted to do a canter class as well, just for kicks. She won all of the walk-trot classes, and as expected came a bit unraveled in the canter class, but did manage to get second in that one too somehow. Apparently the judge didn't notice me almost running into the fence...
Everyone raved about her, and of course they loved her clip job too! 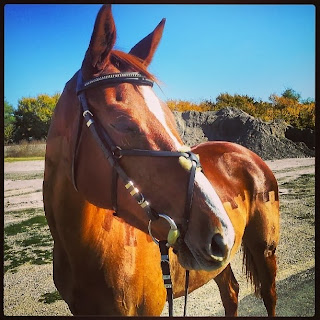 I didn't realize she had her eyes closed when I posted that picture.... it's hard being a diva! 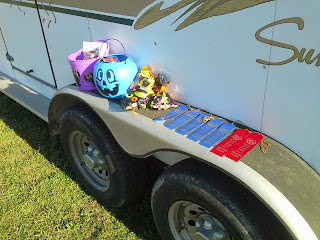 Her ribbons and loot.... it was supposed to be a Halloween show but it got rescheduled due to weather, so we had a lot of Halloween-theme prizes, including 5 bags of cookies and 2 jars full of even more cookies! 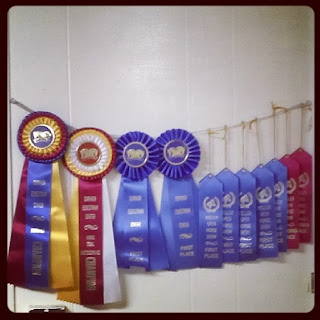 She's amassing quite a collection of schooling show ribbons!