Whoa!! It's been forever since I actually got my monthly analysis and goals done BEFORE the first of the month. Admittedly, the next three days are going to be a totally clustery mess of clients and it's unlikely I'll have time to do anything other than fall into my pillow when I get home, so getting it done now is a good way to close out the month. I really feel like we accomplished A LOT this month, and I'm VERY pleased with the way it went! It was a super start to the New Year!

1) Prep for our next ride in February - more conditioning, more miles! Be really prepared fitness-wise.
Success! We're doing well with our conditioning. I think I've done fewer plain conditioning miles and more training time miles, but miles are miles and the mare is getting even fitter than she was before, if that is possible. Actually, that's kind of a scary thought...

2) Make sure to figure out elyte and gastric support for the next ride! Really failed on this one at High Roller, absolutely must do better at the next one.
Success! I have a better mapped out plan and Racing Stripes I (the next ride) will be a good test of whether or not I have our stuff together. I defeated Texas and found some Pro CMC (FINALLY! You can't have it shipped here because apparently Texas thinks there might be illegal Mexicans in the bottle or something), and I'll be testing it out for workouts at home to see if there's any sort of difference in her (I doubt there will be, but it's good to give it a whirl and see). I'm also ordering some Enduramax and will use the Pro CMC as a carrier for the elytes. Liberal use of her tummy herbs and aloe before/during/after the ride will also help. There is some alf in her timothy/orchard that she gets, but I'm thinking a straight bale of yummy leafy alf will help her munch better when she's at the actual ride.

3) More brainstorming and experimenting about footwear... experiments, experiments....
Success! The Easyshoe will be available for preorder NEXT WEEK! If I can't get them in time for the next ride, we'll have to glue on boot shells instead. Racing Stripes is supposed to be very barefoot friendly, but the Bootlegger Boogie (the ride after) is NOT, so we need to make sure this is fully figured out before the end of February. This mare just can't do on-off boots.

4) Work on the lunge in the Faux-ssoa - specifically CANTERWORK, and map out a plan for dressage work!
Success! This was a BIG success for us this month, as it was something we worked on REALLY hard. I broke the Faux-ssoa back out to get her canterwork steady and balanced before I got back on her and asked her to be steady and balanced with my butt flopping along for the ride, and she stepped up and did well. (When I say stepped up, I mean she pinned her ears at every canter command and gave me the horrible stink eye, but she was compliant for the most part, except for when she was not compliant. Her attitude irks me but getting after her usually sends her bolting off for several minutes, so there's a fine line between telling her to knock it off and only making it worse.) She has also learned the verbal command "slow it down," which works fairly well. The canter has become quite balanced, and the transitions have become LOADS smoother and better. Her opinion of this entire exercise is that is completely sucks and she is not remotely amused, but being that she generally has a bad attitude about anything that involves being obedient, submissive and yielding, this is not surprising. Docile, tractable, malleable, compliant... these are all things that she is NOT. It's a long, LONG road for us in terms of making her a suitable dressage horse... but we will get there.

5) Freejump if we can, and ramp up the height!
Success! She skipped around at 3'9" like it was a cakewalk. I'd like to freejump her again and go higher but I will have to find some standards with more holes in them!!


O-Ren February Goals:
1) Survive our next LD at Racing Stripes I!
2) Dressage work - back to walk-trot, and add in canter gradually! Get to it!!
3) Ramp up conditioning - possible 50s in our near future....
4) Attend one or two more open XC schooling days! Spend time as well putting cavalleti/jump work in on the calendar as the canter improves!
5) Install Easyshoes when they get there and see how they go! (Or, try glue-on boot shells instead!)

I'd say January went very well for us. Here's hoping February does the same! 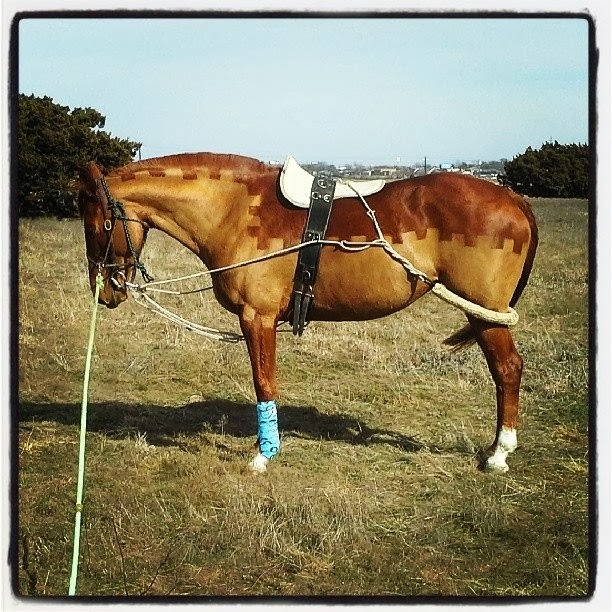