What happens when you get a bunch of bloggers together and set them loose on a XC course? A completely megafantastic time, that's what!!

JenJ from Wyvern Oaks, Lauren from She Moved to Texas, and I all decided a few weeks ago that we were going to an upcoming XC schooling at MeadowCreek Park (MCP). (Mostly it was Jen going, "so clear your schedule because we're going to MeadowCreek!" How could I say no to that!) It's about equidistant between the three of us to MCP, and they were having an open schooling weekend anyway, so we decided we all needed to go! Lauren had XC schooling on her 30 Before 30 list, I had a small red freight train that needed some zooming schooling, and Jen had an adorable green bean Haffie that needed some more XC experience.... it was a perfect situation!

We all arrived at around 10 and the festivities began. I hadn't met Lauren before but I've known Jen for awhile - I hadn't seen her since I went with her to try Oberon though, so it had been awhile and it was awesome to see her again! Lauren was on Red, Jen's Feerless War Pony, and Jen was of course on Paddy, who is even more adorable in real life than in pictures. It was chilly to start with in the morning, but soon warmed up to a very pleasant 60 or so degrees. MCP had gotten some snow (!!) two days before, and there was still some snow left on the jumps and on the ground when we got there. (SNOW. In central Texas.) 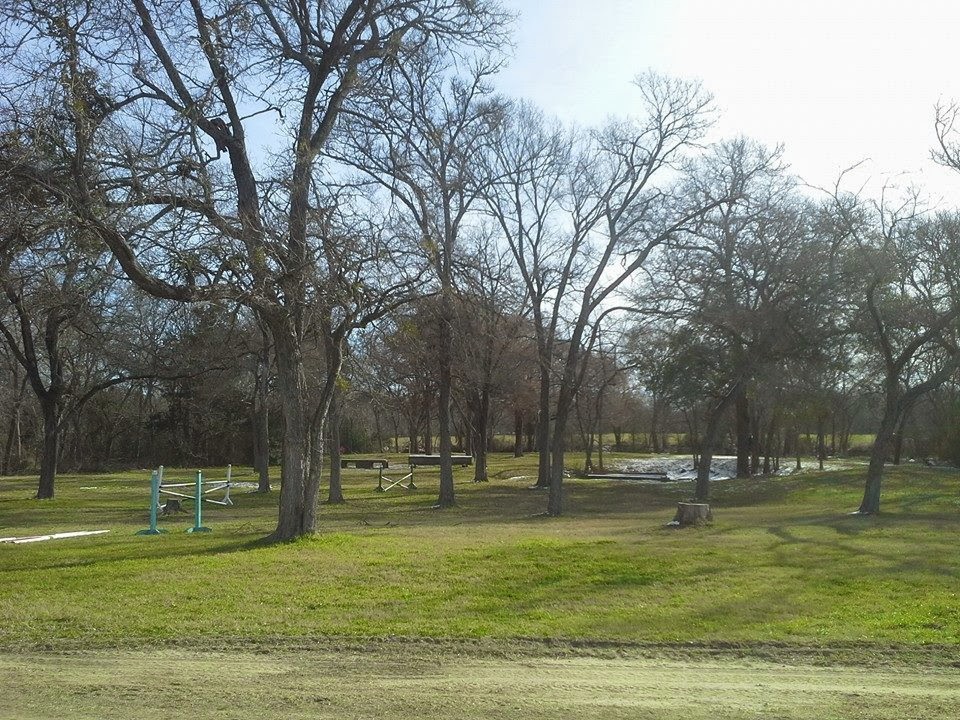 O was very zen while we tacked and readied to go, as usual. I had a ton of people walk by and tell me how awesome her clip was. (And how nice and shiny she is!) 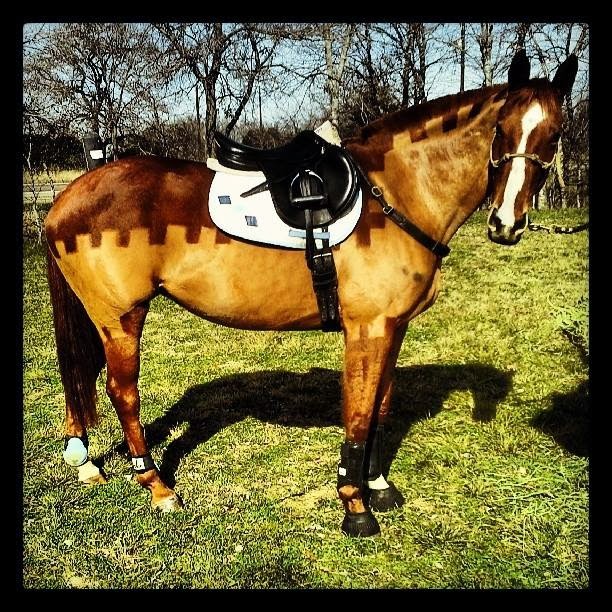 Once up, we spent a few minutes trotting and cantering around to warmup. O spent several minutes Hauling Ass cantering around to stretch out. There is no riding this mare down - she literally does NOT get tired, ever - so mostly our warmup is just a reminder that there doesn't need to be any serious misbehavior going on. I'm happy to report that we have changes though! Not when I ask for them (yet), but when she's cantering around and we switch the bend/direction, she swaps leads. Interestingly, she's quickest to change from her right lead (her favorite lead) to the left (definitely not favorite lead), but slow to switch back from the left to the right.

I opted to try the hackamore instead of a bit. Riding her XC in a snaffle is just a joke, and I'd rather not haul on her mouth. Riding her in the pelham is quite a lot better (same mouthpiece, same ability to go on the snaffle and then have some brakes when I need them), but I wanted to see what would happen if I could totally get out of her mouth. Her poor form I think is mostly due to a) her overly enthusiastic response to being presented to a jump (RUN NOW RUN FASTER OH CRAP BAD SPOT FLAIL), and b) me hanging onto her face so much in order to keep her from running and flailing that I have no real ability to just give her her head and let her take it without curling up into a ball. Other things, like greenness/balance come into play definitely, but I'd say that the large majority of all of our problems stem from her belligerence. I use that term in an endearing kind of way, as it makes her very brave and bold, but there is a certain degree of difficulty to her wanting to do things her way, and to hell with you if you disagree!

We warmed up over a little coop in the first field that we were in, and the first thing O did was refuse it (twice). I haven't jumped her in literally about two months, so I *slightly* forgive her for this, but Paddy and Red played jump standards for a minute so I could get her over it. The first few jumps were UGLY but we got over. When we moved into the main field things quickly improved and she started REALLY jumping well. The hackamore was a really good idea - the combo of getting out of her face and having a shadow roll (so she has to put her head down to look at things) was very helpful. Not to mention for some reason I was riding halfway decent myself - it helps when you can get out of your horse's way! (I'm really, really, really rusty and my left ankle doesn't really bend anymore, but oh well! I look less horrible than I thought I would and I think with some more practice I might be back to where I was before. I just need to lean less, stay over my center of gravity more, keep that leg steady and let the release happen naturally instead of leaning to make it happen. Happy to see that my lower leg is pretty strong and stable all things considered... I suppose that's what happens when you ride a zippy little red horse and you need to be able to stick like velcro!) 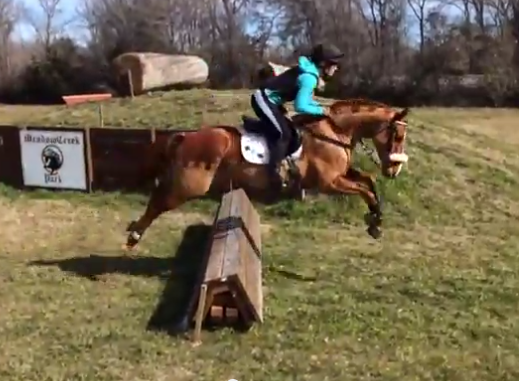 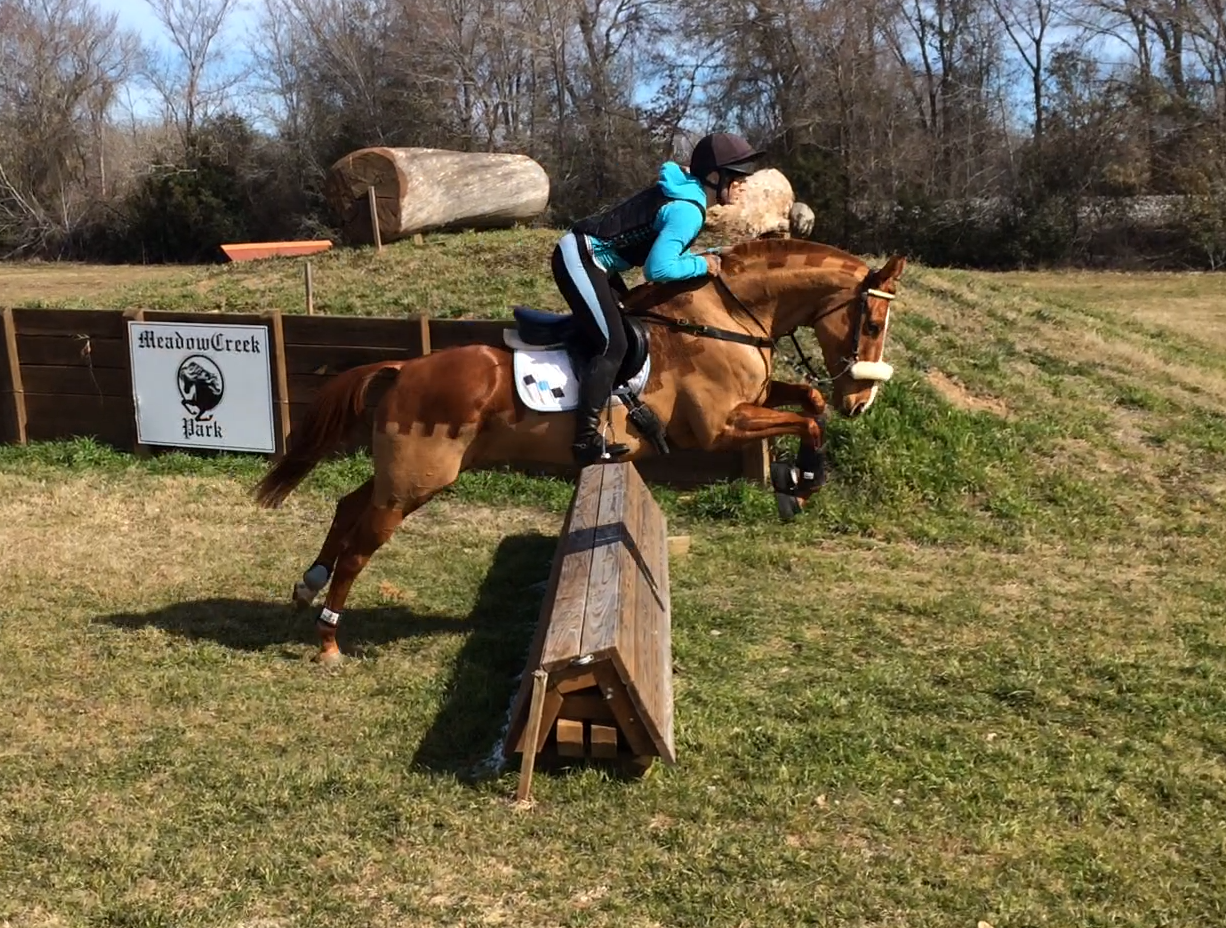 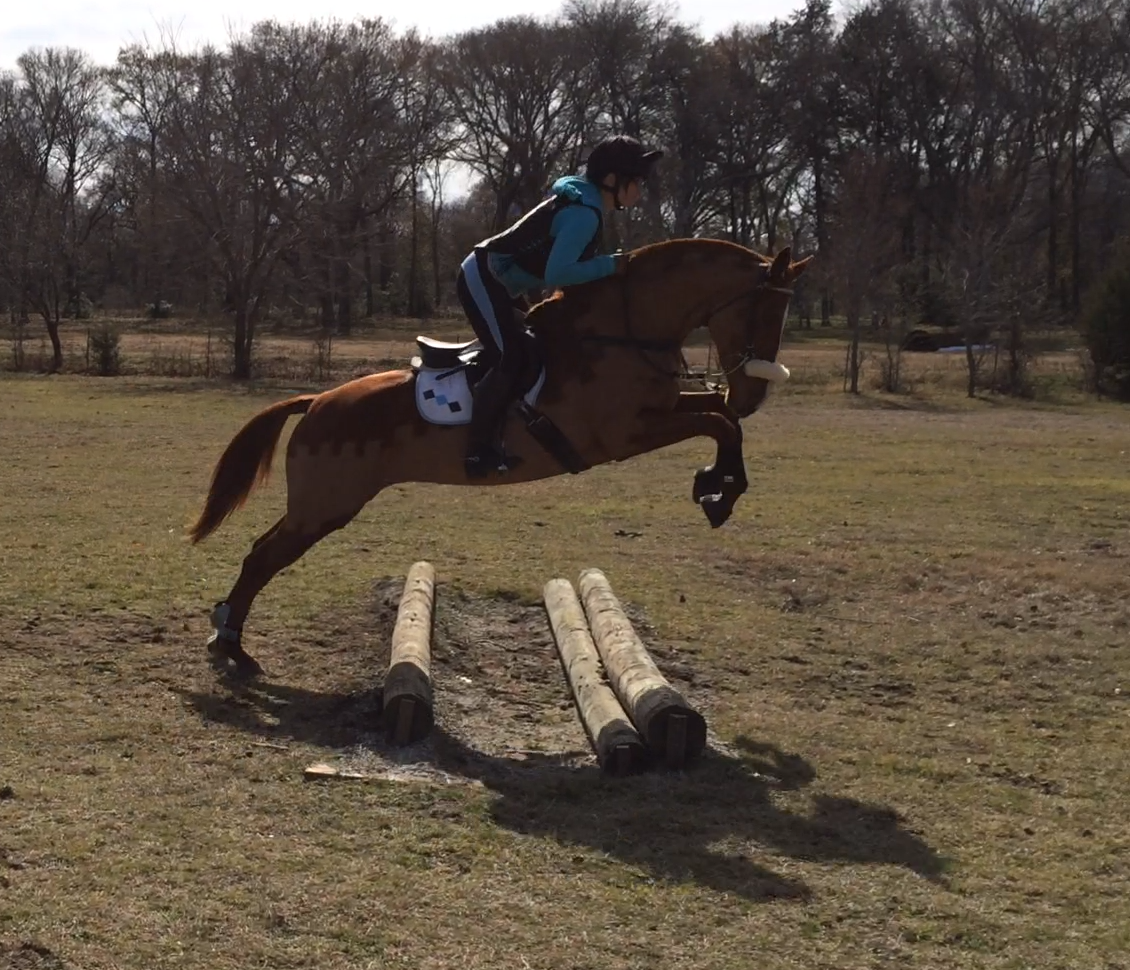 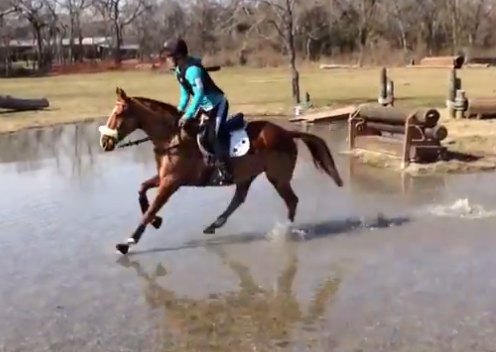 You can see I'm clearly still leaning at her and not giving her NEARLY enough of her head to actually stretch out and get over the jumps with good form, but it is vastly improved compared to before. It is very, very hard to give the horse some rein and let them roll along when they are this strong and enthusiastic. Seriously, she feels like riding a freight train with no brakes. She may need to have her martingale put back on, but I'm not keen to do that with the hackamore - that's an awful lot of leverage if she throws her head around, and I think she'll hit the brakes and have a meltdown if she hits it too hard. I may have to abandon eventer-land for a bit and put a standing martingale on.

You'll see in the video what exactly I'm talking about in terms of getting a little too strong in front of the fence - and the difference in her jump when she just lowers her head a stride or two our and looks at it instead of charging at it with her head in the air.


Thanks SO MUCH to Lauren for the awesome video! Check out the adorable canter through the water... if only I could get her to cruise around on a loopy rein like that all the time. If I let her have that much freedom we'd be doing a lot more of the galloping scene.... I didn't ask for that by the way, she just needed to blow off steam so I loosened up on her for a minute and she was OFF. (The martingale has a lot on the way of brakes but we still had a very hard time pulling up at the far end of the field after that....)

All three horses were AWESOME. They were all game, brave, and forward. I'll let the other two tell their stories of schooling, but let's just say a certain red horse (that was not mine) got the award for best blooper of the day after cantering through the water jump...


We finished up with our hilarious ditch session - Paddy did not want to do the bigger coffins so Jen and I got off and schooled over them in hand. I think O would have done them under saddle, but she was getting mentally tired and I didn't want to push it. Going through the water AND to a jump at the same time was a hard concept for her to process. She had a few runouts there before finally putting two and two together, but that was about the end of her mental capacity for the day, and we did the little ditch a few times before taking a nice long hack home.


After the ditch we also played musical ponies!! First I got on the Feerless War Pony and took him for a spin... 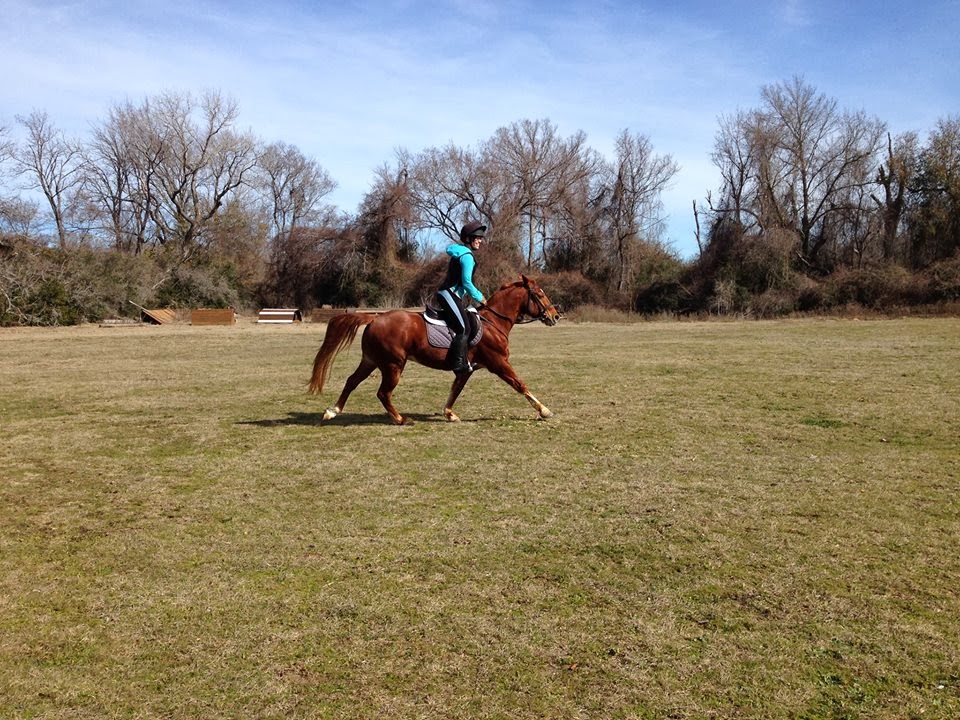 Then I got to ride the Haffington in all his mighty cuteness! 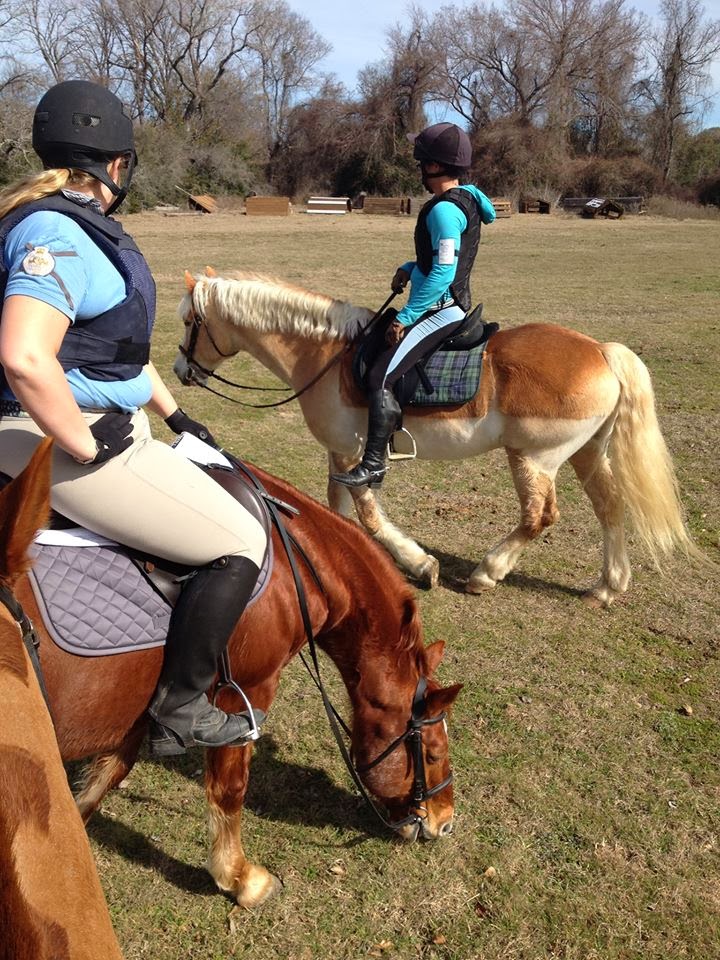 Lauren rode both Red and Paddy too. And Jen rode all three of them!! 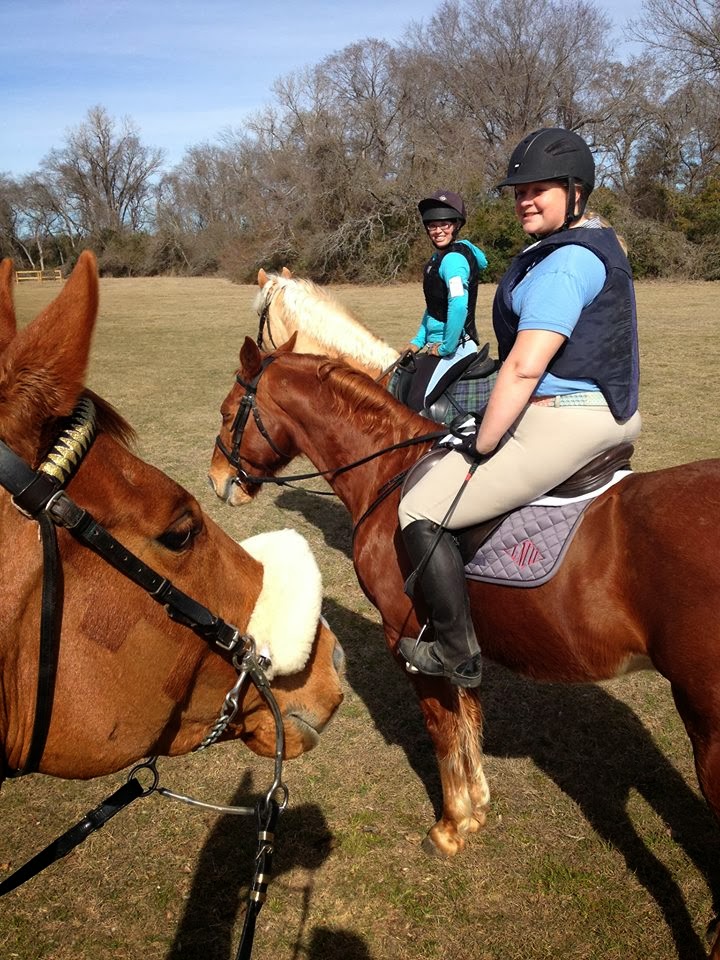 (Note to self.... find a smaller headstall to make the hackamore actually FIT. I had to punch extra holes and it still didn't sit high enough!)
I jumped Paddy around over a few little things (AHH SO CUTE SO WIDE SO SQUEEZY) and it was awesome. He's going to be so great. O was a perfect lady for Jen and she walked her around on a long rein with no stirrups. That makes me feel REALLY good... this is the first person I've had on O besides myself since I've had her, and even though I was pretty sure she'd be fine, you never really know what's going to happen. She was perfect for her!

Very, very impressed and pleased with my little red bullet train. We have a long way to go, but we've already come so far. I'll have a post soon about our 2014 goals!