The Reeling's Year In Review! 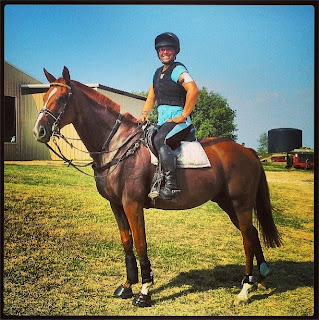 What a crazy year we've had. Aside from the awesome non-horsey things that happened (business success, getting engaged, seeing some of my favorite bands, catching up with old friends and making new ones), here are some of the horsey highlights of the last year! 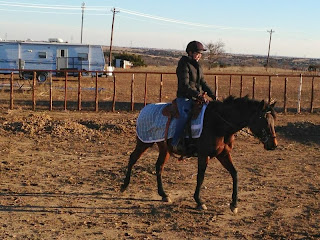 Immy, P and I all move to S's place after having a horrible time at our previous boarding barn. I struggle with the weather and with Immy's ongoing ulcer problems - if the air moves the wrong way it sends her spiraling into gastric distress. Immy gets her second ride, and her third ride brings trotting and a bigger space! She is still extremely twitchy, weird, and frightened of most everything that remotely comes near her, her bridle especially (the most headshy horse I've ever met). I get a crazy idea, and contemplate the future. 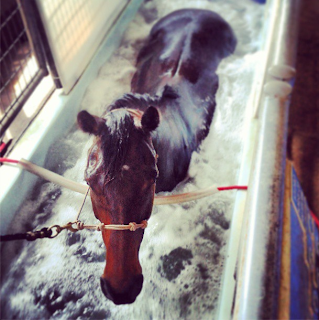 My crazy idea goes HORRIBLY wrong and Immy pile-drives me into the ground (and 12 months later, I STILL have a haematoma on my butt). We do a lot of AquaTreading, Immy's brain goes on the fritz from too much handling (even just catching and touching her every day was very hard for her), and the dentist finds a lot of awful things in her mouth. We all are very tired of winter. I go back to lots and lots of groundwork with Immy and try to get her head back on straight. 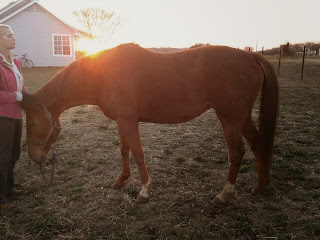 Immy gets weirder under saddle and on the ground, and we accomplish 0 of our goals. I PowerPac Immy and more or less shut her gastric system down, and make her hard to catch. We get it back together and I get an over-the-head blanket on her, figure out sidereins, and go on a TRAIL RIDE! I find a small, dirty junker mare on Craigslist that I decide to take a chance on as a turnaround. Her ad title literally read "Warmblood mare, comes complete with issues"... of course I had to go look. I was told she was jumping around 4' last year (which was a bit of an exaggeration), but that an idiot trail rider went bombing around on her for a few months and basically ticked her off to the point where she just quit going forward altogether. When I went to go try her, I couldn't even make her go faster than a walk - I put my leg on and she quit on me altogether, stopping dead and pinning her ears. I talked the owner down to $500, brought her home on the last day of the month, and renamed her O-Ren. 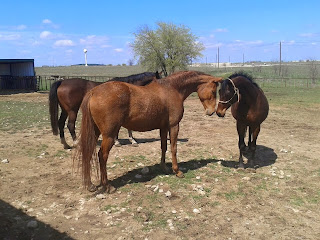 My entire life gets thrown for a loop when my lawnmower shoots a rogue rock out at me and cracks me in the ankle. I am off on crutches for quite a long time, and end up leaving a dead-end job because of it. Immy goes out to new arenas and does wonderfully, and I find out that O's issues are entirely more complicated than I had originally thought. She goes in every single direction except forward at a normal rate, and goes every speed possible except the one you want her to go. P gets her butt handed to her a few times and gets reminded that she is 17, damnit, not 2! I compare how the mares all looked when I got them, and how they all looked then. I talk about bratty miss P, and skittery miss Immy. We have a pretty good month... it is starting to get HOT outside. 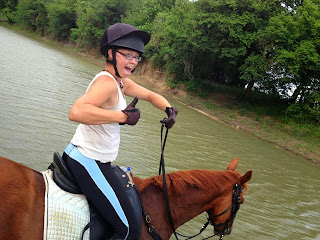 Immy catapults me again, HARD, and unexpectedly. At this point, I am starting to seriously question whether or not she will ever be safe under saddle... she is still very frightened (despite a year and a half of working with her) and completely unpredictable. O gets a lot of wet saddle pads, and I talk about how weird and quirky redheads are. I outfit her in some headgear (neck stretcher/martingale) in order to try and keep her somewhat under control (it partly works). We get hit with some extremely scary tornadoes and a bunch of people die, but thankfully we're all fine - one touched down in our pasture though!! I do some sleuthing and find out more about O's history. I find out there is no possible way to tire O out, ever, at all. We ride for hours and hours and hours. 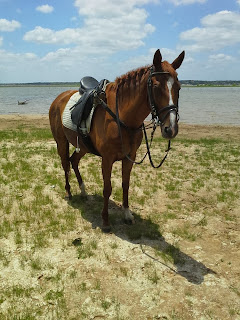 I decide that Immy needs a month off to just be herself. I find a little Shitner on the side of the road and everyone chips in to save him (and we do!) I talk about how when I got O, she wouldn't go forward, and now she is WAY too forward! I ride the crap out of O. I finally get tired of O's messy nightmare mane, and hog it. We start to jump little things, and we go out for our first XC school (and she is AWESOME). I throw everything and the kitchen sink at her, including cows, barrel races, endless trail rides, and more. She becomes an increasingly cool cucumber in new situations, although she is still hot as hellfire. 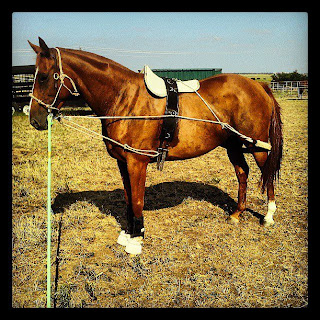 I make a very tough decision and decide to let Immy be retired as a companion-only horse - her issues make her too unpredictable and dangerous to ever really be trustworthy under saddle. I am SO thankful we all rescued her and rehomed her, even if she didn't end up being a show horse like I had wanted - it was the right thing to do. Somewhat unexpectedly, P finds herself leased out as well, and O becomes the only child for awhile, and I spend a lot of time discussing that. I make plans, I lay down some law, I show off our lunging improvements and I score a membership to WD. O gets some cranio work (doesn't do anything), and we have a horrible jump school (although we know why). We lose Kidd Kraddick and my heart breaks. 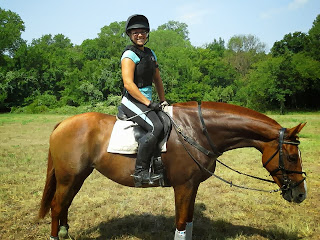 It's hot. We have no brakes but we do more jumping and XC schooling. O completely loses her marbles when she comes into heat, and I consider options for helping that. No, really. I GET ENGAGED! And then of course I have to catch-up with posts! She is starting to be pretty awesome, if I do say so myself, even though she is REALLY difficult and REALLY challenging! 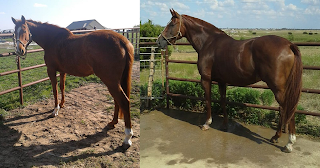 (O the week I brought her home, and O in Sept)
We do more XC schooling and ride in a pelham - and find we have some brakes after all! I talk about 9/11, like I always do, and about how my carefully crafted show schedule has more or less gone up in flames due to the shows themselves being cancelled. We do a lot of flatwork on the trails. We go to our first dressage show and win everything! O makes a tiny friend. I sign up for her first ever schooling event, and then realize that we kind of can't canter. That is kind of a problem! 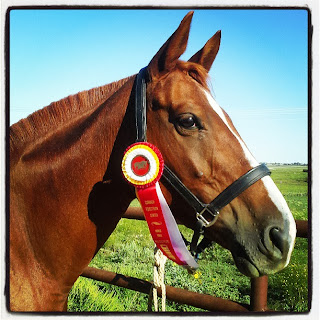 We go to our first ever schooling HT at the Elementary level and do awesome, despite the canterwork being horrible and the dressage score being terrible. She jumped around like gangbusters and I was very proud of her! I talk about emotions, and about missing Gogo, who has now been gone for two years. I find a very small little black mare and decide to take her on as a resell too (although resells apparently don't seem to work out for me since O isn't going anywhere!). I get her home, start putting her back to work, and talk about how sensible QHs are versus warmbloods. I contemplate whether or not O really has any jumping ability, and think long and hard about what I *really* want to be doing with O (to this day, I am still not completely sure). I also look back on various ways I tortured dressed up my old ponies on Halloween! 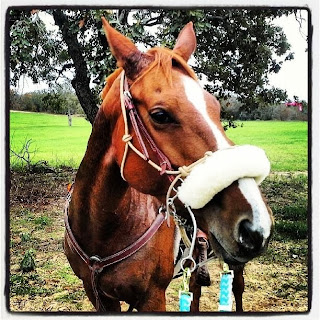 O and I do an Intro endurance ride AND HAVE A BLAST. We both LOVED it! I clip my dirty horse and still manage to make it look decent, and we go to the chiro. O's old owner sends me encouraging pics to show me that yes, this mare CAN jump! I ride my little Tre a lot, and take O to a little schooling h/j show and win everything again. O bonks her knees coming out of the trailer and they are fat for WEEKS. I get iced into my house and write a lot of plans out. Tre goes on trail rides, and O gets back to work once her knees are back to being semi-normal. 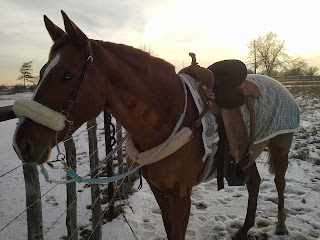 I have big plans for December, but O gets attacked by a dog and a huge ice storm ices me into my house AGAIN for several days, so that all goes kaput. We get fed up with the weather, so as soon as I can safely make it back to the barn, we go riding. We start conditioning more seriously for endurance. I ride both girls on the trails for hours and hours and hours, and I still can't wear O out! We gallop, a lot. Christmas comes and goes. I find myself shocked that the New Year is already here, and put her back to work on the lunge. The girl has GOT to learn to canter without rushing, dirtbiking, or running off!

Email ThisBlogThis!Share to TwitterShare to FacebookShare to Pinterest
Labels: year in review