Well that was a vague title.

I don't think O has been quite right in the gastric department. I think this was stirring a bit before the last ride - she has started to be a little weird about catching, like when you show up she turns and goes to the far corner of her pen, which basically means "go away leave me alone." I had thought this was because S had been doing a lot of the feeding, and she and S do not remotely get along, but I'm wondering if it wasn't something else instead. S doctored her some when she got bit by the dog last month, and I'm under the impression she gave her a lot of bute and dex in the process. She may have been (and may still be) teetering on the edge of a gastric problem following that. Normally she is very friendly and walks up to you in the pen, you don't usually have to go get her yourself.
She's not ever really been a ravenous hoover. She cleans all of her grain meals up, but she wastes quite a lot of hay, and if there is a speck of dirt on her hay, she spits it out and refuses to finish it. She has to be really hungry in order to eat the hay that she has decided doesn't taste good enough. I always give them fresh clean hay in their nets every day (and part of why it is netted is because if she puts her feet on her hay, she won't eat it!), but if they don't finish what is in a bag, sometimes I make them clean it up and MAN that makes her angry. She will just sniff the hay and then stand there and glare at me. If she is REALLY pathetic, she'll walk around nickering at me like she's just STARVING, and how CRUEL I am for letting her STARVE, that hay that is 1 day old is POISON. The horses I've had in the past that got hay meals instead of 24/7 hay have always been just RAVENOUS whenever they were fed, ulcers or not, because they knew that was all they were getting and they better snarf it up. My current horses know there will always be hay there, no matter what, so they are content to eat some, then mill around, then eat some, then take a nap, then eat some. (This actually is very stressful for me... every time they are not eating, I am freaking out. They are FINE but it still freaks me out!)
She's been a bit ehh about eating this past week. She is eating, but she is also just standing around a lot not eating. It's probably just me being super paranoid about it, but I think she's been a little dull this week too. Time to get aggressive, just in case.

She'll have a few days off while she gets dosed with aloe/bentonite/marshmallow root/slippery elm mixed in with hay pellets - a sort of 'yummy tummy' meal that she'll get additional to her regular meals. If that helps, yay and we can progress on from there. If that doesn't help, she gets more aggressive treatments with Omeprazole/Ranitidine. If THAT doesn't help, then I need to take a Xanax and stop assuming my horse has a gut problem. She inhaled her tummy meal today and her regular grain meal as well, was very perky when grooming, and then wasn't really too interested in hay again afterwards (which isn't really unusual). She ate a fair amount, but then wandered off to be alone. Tre must have been REALLY HUNGRY because normally she is O's shadow and never leaves her side: 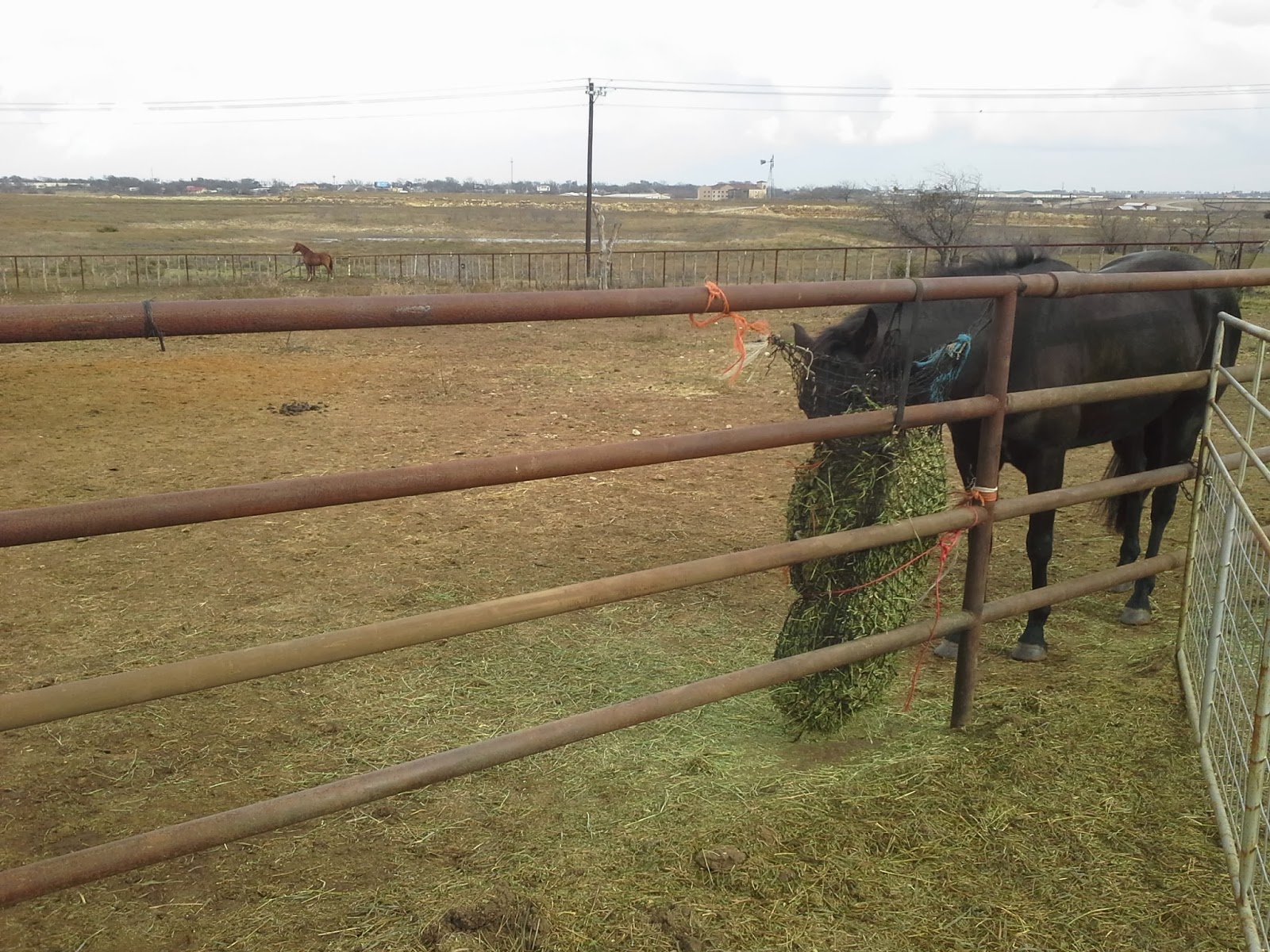 See what I mean? TINA EAT YOUR FOOD.
I'd rather nip this thing in the bud before it ever actually becomes a problem - because this horse will be a DEMON HELLCHILD if she ever actually gets burning ulcers - so she'll have off for however long she needs to get herself back together. It's a delicate balance... she's a hellchild when she's not getting enough work too, so here's hoping this sorts itself out within short order.

Aside from that, I have a very small cute Texas Warmblood to play with! 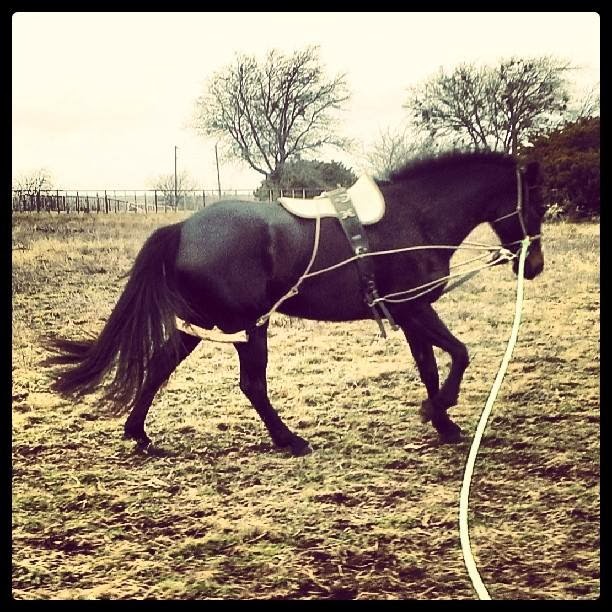 Geez she is cute. I kind of can't believe nobody has snatched her up yet - if she were a hand taller she'd be gone already. Some days I am all about selling and moving her on, and some days (like today) I really would like to keep her because of how insanely adorable and talented she is. 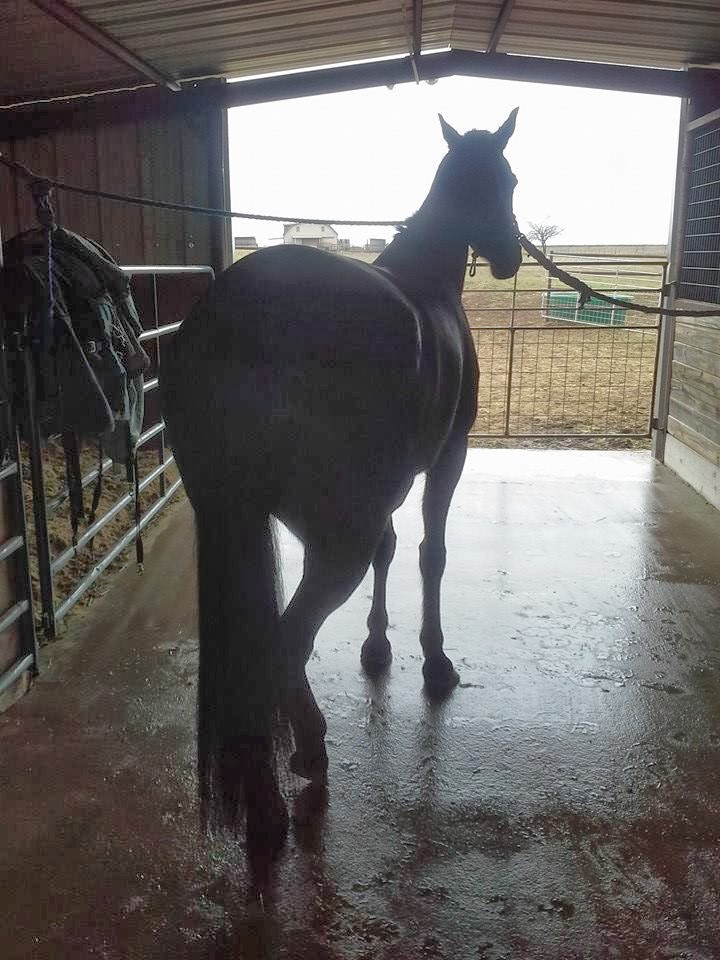 It really all boils down to cash. Life is expensive. Starting and running a business is expensive. Feeding horses is expensive. Showing horses is extra expensive. Looking into the future and wondering if you'll really ever be able to afford your first house is depressing. Wondering if you should just elope instead of have a wedding because it is too expensive is depressing. Firmly telling yourself you need to sell your cute little future eventer because that's what you bought her for is depressing.
Being a responsible adult is hard. Where do you make the 'right' fiscally responsible choices, and where do you allow yourself a little leeway to have some fun?