Well I'd say that went pretty well, wouldn't you?

Our final show of the season was this past weekend. Since we unfortunately can't make Black Star this year, I figured this would be a good end to it. We missed a lot of shows this year, and I am admittedly disappointed about that. I did find out that there is one final local show in late November that I might be able to do, but we will just have to see about that.

After the not-too-successful Romp, I was hoping to do quite a lot better at this show. O really excels at these little playdays, and they are super fun. She is definitely into the idea of turn-tight-go-fast. Being that this show was very close to Halloween, there was also a costume competition - we all dressed up, then everyone voted for their favorite costume. As for us, I donned a viking helmet over my actual helmet, and dressed O up as a red dragon: 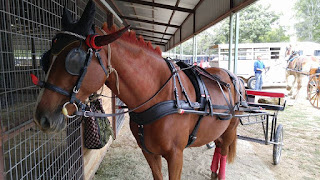 Wings and all! And yes I did cut her mane (and put red hairspray in it) - it was getting long and was about time to roach anyway, so I figured this was as good a time as any if I was ever going to do something crazy with it! I spent about $25 at the discount Halloween store for the horns, wings, viking hat, and hairspray, then took red poster paper and ziptied spikes to her harness. Basically this costume was just awesome in every way, and a got a LOT of compliments. We didn't win best costume, but personally I thought it was pretty excellent.

We borrowed the little red cart from my client who bought it, which I am thankful for. That little thing can sling dirt! It weighs next to nothing and it can just whip around things at high speed. I can't wait for the professional pictures to come out - at one point I know I was all but standing up with all my weight braced to one side, counterbalancing her turn at speed. It has to be a ton of fun to be a navigator, truly.

The first pattern of the day was "Pattern G", which was a marathon hazard. Since they get really confusing when you first look at them, I outlined the path we traveled in blue. The rules are similar to eventing in that you have to go between two flags, the red flag being on your righthand side. You must do the gates in order (i.e. A then B then C etc), and you can't cross through any of the gates out of order. Gates are live until you cross them, then they are considered dead and you can go through them again without any penalty. For example, if you look at where gate A is and where gate B is, it looks like you should just be able to cut through the middle of the hazard to get there right? But look again - gate C is in your path, and you can't cross it before you cross B or you are eliminated. It can be hard to remember at times! 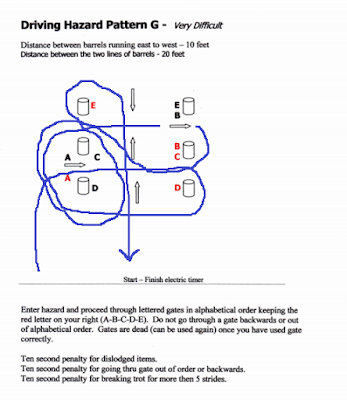 Clear as mud right?
O being O, she trotted casually up to the first turn, then turned on the afterburners throughout the whole thing. We won this class!

The second class was the corset. It was basically a set of weave poles, a cone, and more weave poles. O went in and charged around just fine, so I was surprised when I ended up in 5th place, 10 seconds behind the leader. What we think may have happened was that the person in front of me had a ten second penalty for cantering, and that somehow may have gotten added on to my score instead of hers, because she ended up second and I ended up 5th. But, ah well. I didn't fight it because I thought it would be mean to take away that person's second place, even if it was supposed to be mine. I would fight that at a bigger show, but not at a playday. I know how we did and that is good enough for me. 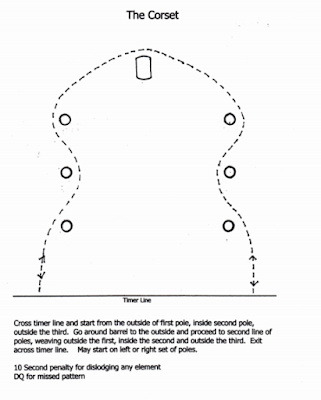 The third class was the Flying W. The formatting on this picture wasn't right, so I drew in red how it was suppose to actually go. O powered around this one too at high speed, and won it as well! 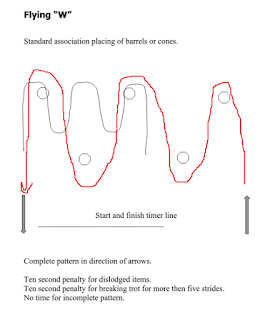 We broke for lunch while the organizers set the cones course, and then we all walked the course. It was kind of a doozy of a course - difficult and very turny. You'd really get going and then you'd have to crank around in a tight turn. It's a little bit hard to see on the map, so I drew in the path I took. From 9 to 10 was the toughest turn - on the map it doesn't show it, but there was enough room between 10 and 16 to cut between them, then loop back around to 10. It was tight but we did it! I was one of the only bigger horses to attempt it, both in the cones course (trotting) and the Derby (same course, cantering). It paid off as we won both of those classes! I was hoping to break the minute mark in the Derby, but O in her usual fashion took her time slowly trotting up all the way to the second set of cones, and finally she bothered to pick up the canter. I don't canter much, if ever, in the 2-wheel cart, so I think she just sort of ignored my asking for a few moments, thinking "hmmm... she is asking me to canter... but I am not supposed to do that... do you REALLY want me to canter? Are you sure? Well, ok then...." Our time was 1:10 - I think had I gotten her cantering before the timer we could have shaved several seconds off the time. Our time was 15 seconds slower than the fastest time in the pony division! 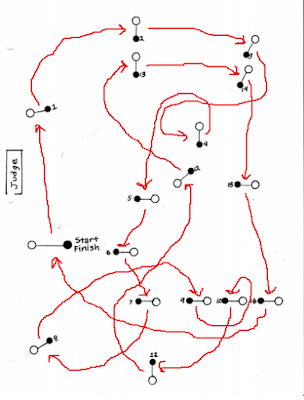 The final course of the day was the Double Keyhole, which we did in our first ever playday a year ago as well. We did not do very well in this one last year, but we did significantly better this year - we won it too! 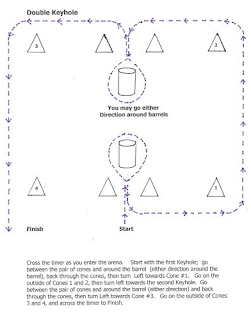 It was a very successful outing. I can't wait for the professional pictures!

And, on top of that, I have a really exciting driving-related surprise to share soon.....