At 4:15AM, my alarm went off this morning. I groaned, rolled over, shut it off, and slept for another hour, much later than I had expected. I managed to drag myself up and be out the door at 6:15, 15 minutes later than I had hoped, and headed off to the barn. Had I not slept in, and had I not been late, I would have completely missed being a part of today's story. Fate is an unusual thing sometimes.

As I merged onto the freeway and sped up to 70mph, I glanced over at a TINY little black and white bundle of fluff on the side of the road, just sitting there at the edge of the grass on the side of the freeway. "What the.... was that a kitten?" was all I could think, and I was so intrigued that I merged off at the next exit, turned around, got back on the freeway, turned around again, and went back to see what it was. Sure enough, it was a TINY kitten, sitting immobile on the side of the road, only a few feet away from getting creamed by a speeding vehicle. When I got out of the car he hissed and tried to run, but didn't make it very far in the long grass. I caught him, changed my plans for the day, and took him home. He was absolutely skin and bones.

At home, I gave him some dropper-fuls of water (he was SO THIRSTY), some wet food in little portions (he was SO HUNGRY), and some lovin. I watched him limp around and realized pretty quickly that one of his hind legs was totally unusable, and also had a big scrape on it. He was scared at first, but warmed up to being petted VERY quickly: 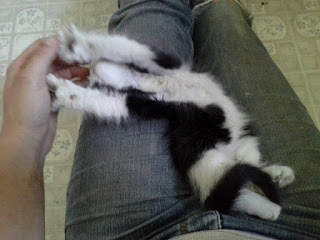 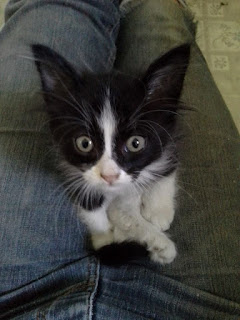 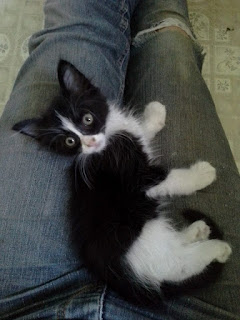 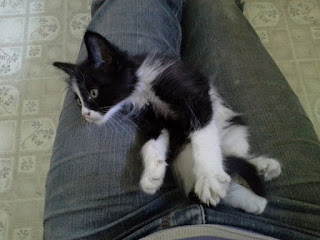 Off to the vet we went - I wasn't even sure that he was going to survive. Much to my delight, they think he stands a very good chance. He's about 6 weeks old. His leg is broken in at least 2 places, one of which is right in the patellar/growth plate area, which means that the leg isn't likely to heal well. He'll need a limb amputation if he is going to survive.

I am in no way set up to take on another cat, much less front the bills for another mouth to feed, but this little guy is a fighter and a sweetheart and deserves a fighting chance. We're going to do a round of antibiotics and see if we can get his weight up, and then he'll need surgery. I hope to foster him until he is well and then find him a loving home, but I need your help! Surgery and care is expected to be a few hundred dollars - it's not a ton of money thankfully, but it's still more than I have just sitting around. Every little bit helps, and you'll be giving this little love a chance at life. The blogging community has come together before to help with rescues, and I've always been amazing at the generosity of each and every one of you. Let's give this little guy a chance at a new life!

(The link *should* be fixed now, so fire away! If you can't get the link to work, you can send the donation to eventingagogo@gmail.com!)