It's official. O's calling is an an event horse. I CANNOT believe how good she was this past weekend!

It was assuredly her first time ever going out XC, I can 99.9% guarantee it. I've been obviously taking her out and giving her the ATV treatment (going over all sorts of terrain at all varying speeds) for the past two months, and have hopped or stepped her over every obstacle that I have come across. She's always been very, very game and very brave. There's no better way to get a green horse broke than to throw everything and the kitchen sink at them and let them figure it out in a low-key environment - that way, when the bigger and more important things are asked of them, they go, "oh ho hum, we do this all the time, this is whatever."

She loaded and unloaded like a lady, and stood tied to the trailer quietly munching her hay while we got ready: 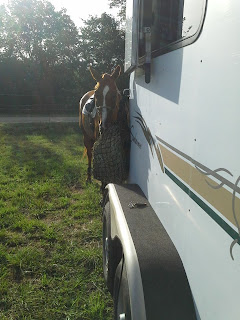 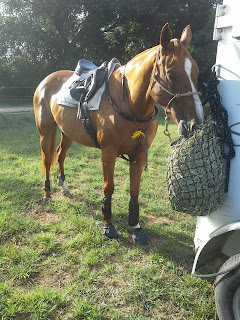 I opted to ride in the Deltas because I wasn't sure how the footing was going to be, and didn't anticipate that we were really going to jump anything. Boy was I wrong!!

We tagged along with a trainer that I am friends with and her group of kids that were participating in the schooling show the following day (it was an open schooling in preparation for the show), and trotted and cantered around in the warmup while they also warmed up. I was quick to figure out that while I had been riding with no problems in the waterford before, I now had NO BRAKES at all. I could get her stopped, after 10 or 15 strides... but it took every ounce of strength I had. She was more than happy to walk along on the buckle, but when we trotted and cantered? Nope! I figured since I had steering and my backup emergency one-rein stop installed properly, we'd keep on with it and hopefully with some riding down she'd slow down a little more willingly.

The girls hopped over some BN-N jumps, and then we came upon a little Starter jump. "Want to give it a go?" the trainer asked me, and I said, oh sure, why not. We walked over it the first time - it was small enough to step over, but big enough that it took an effort to step over it - and I decided that we'd jump all the little things that were small enough to be stepped over should worse come to worse. We set up, came at it at a trot, and she cracked her back like it was 4' tall. We headed to the next one, and she slowed to a walk to look at it, but stepped right over it. We re-approached, and she did the same thing, cracked her back over it like it was huge. This mare is REALLY going to make sure I perfect my releases, because if I don't give her enough freedom in her neck, she pitches a royal fit with her head on the landing side of the jump. I was quick to adjust, and she was much happier for it. 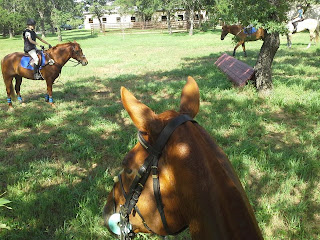 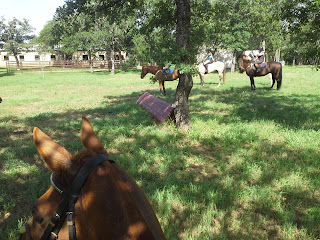 After that, she was a superstar. She jumped EVERYTHING I pointed her at, trotted and cantered around through the woods to and away from the herd without fuss, didn't complain when we were out of their sight, didn't look at anything, didn't fuss, didn't hesitate anywhere. She went over ditches, bank, trotted through the water complex, went up and down hills, everything! She got a *little* tired at the end, and the last fence we went to she was a little slow to pick up the trot - she gave me some hesitation and a very small 'don't wanna go' attitude when I put my leg on, so after we made it over I called it quits. My only problem was that my brakes were completely nonfunctional. We trotted everything with ease, but the only fence I cantered to I struggled to keep her under control (we went back to trotting and keeping it simple after that). But more than once after a fence, she bore down on the bit and off she went. She was never out of control, but I just had no ability to stop her without some serious strength and a long runway. More than once, I had to one-rein stop her, simply because she literally just was NOT going to stop otherwise!

I shall have to do some musing on bits. Anything with leverage I can almost guarantee will be out - she knows full well how to curl her neck in and avoid the contact, much like Gogo did when I had anything with leverage on her (even just a short-shank hackamore was too much leverage for her). Something with a different mouthpiece is a possibility - maybe a slow twist. Somebody even suggested a gag, and while I feel like that is A LOT of bit for a horse going around the tiny jumps, I also have to remember that a) a gag would afford me the action of a simple snaffle with the snaffle rein, and have the gag rein as a backup in case we forget to stop, and b) this is a horse in re-training, not a horse in training. I would NEVER put a young horse in a big bit like that - I hate to do it period - but when a horse is strong-willed like this little redhead is, and she decides she wants to go faster now and screw you if you want me to slow down, sometimes it takes a little 'excuse me, are you listening' to wake them up. It takes time and re-training to get them listening to half-halts out on XC, where things are fast and exciting. I am NOT a bigger better bit kind of person - I always ride mine in the kindest snaffles that I can - but once in awhile I need to reach into my bag of tricks.

Funnily enough, the first year I had Gogo out on XC I had to use a d-ring Mikmar on her because I literally COULD NOT stop her sometimes (same thing, eager horse wants to GO and screw you mom!). I actually couldn't ride her out in wide open spaces for a long time because she would just put her head between her knees and take off bucking towards the nearest group of horses. I thought for SURE she'd never make an eventing horse after our first show, I had to kick and pull around the entire course and barely made it over ANYTHING! She of course grew up, matured, became a properly behaved critter, and was happy to do her gallops in a big fat mullen mouth Happy Mouth by the end of her career. It just takes time with these tricky ones!

To be honest, I don't even own any stronger bits... the meanest thing I have is my waterford. The rest are snaffles! If anyone has any particular ideas for the strong-willed and strong-mouthed horse in re-training, fire away!

If I were made of more money than I am I would have to pick the golden wings gag as my next step up: 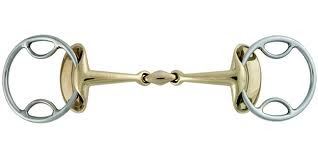 Alas, shelling out a hundred smacks on a bit that may or may not work is not really in the cards for me at the moment. The econo-version with bit guards is probably a better option (runs more like $30). I USED to have one, but alas, it ran off with my ex-girlfriend. Isn't that always the way?