This summer might go down as one of the most epic trailventure times of my life. With one last week, one this week, and one in the works for the coming week, it doesn't look like we'll be slowing down anytime soon!

These rides are EPIC. We pick a place with miles and miles of trails and go first thing in the morning during the week - we rarely see another soul and almost always have the place totally to ourselves. Summer is here and in Texas this means blistering temps over 100 degrees every day, so we make sure to get on at dawn to make the most of the "cooler" hours. ("Cooler" = 80's). Last week we chose Lake Mineral Wells State Park for our weekly ride, and headed out bright and early as usual. We were tacked up and mounted by 7:30AM, which was a little later than we had hoped but still gave us plenty of time to enjoy the day.

O's been wearing Delta boots for our treks out. Her feet are still complete garbage, but they are improving. For distance and terrain, she absolutely needs help, but she's a hard one to fit - her feet are still relatively misshapen, and high performance boots like Gloves or Renegades favor the "perfect" foot and don't stay on for beans if the foot isn't great. For those unfamiliar with the Delta brand, Delta boots and Cavallo Simple boots are literally EXACTLY the same thing, except Deltas have a ballistic nylon upper (with a leather rim) instead of an all-leather upper - but literally even the back of the Deltas is all-leather and has the Cavallo name stamped into it. They're EXACTLY the same base, have the exact same drainage, same tread, same sole relief, same everything. While I am very familiar with the Cavallos, I've never even looked at Deltas before until now, since they are almost virtually unknown and are completely overshadowed by the bigger names. I picked them for O over the Cavallos due to the fact that ballistic nylon dries quicker and is cooler than hot, water-absorbing leather. The leather on the rim of both types of boots is exactly the same, so it breaks in the same. While they are breaking in, they are rubbing her slightly at the back of her pasterns, but some pastern wraps fixed that issue quickly. I've been severely impressed - they have stayed on and straight in deep water, muck, over insane rocks and boulders, at a dead gallop, and through every extreme I can think of. I can't get them to turn or come loose even when I try! These ones won't be high-performance type boots (lower profile and lightweight for jumping, eventing, etc), but they are the perfect "hiking boot" for this mare over terrain when I need something rugged.

At Lake Mineral Wells, we had the trails all to ourselves. We didn't go for nearly as long as we could have, and only trotted and cantered for a little while, but it was still a solid 3.5 hour ride and we had a great time. We couldn't figure out the map for the life of us, but managed to decipher the fact that the trails were marked by color - green for easy and wide, yellow for slightly narrower, orange for narrow and twisty/rocky, and red for straight up and down cliffs and boulders! We were pretty surprised when we ended up on the red trail, it was VERY rugged terrain! 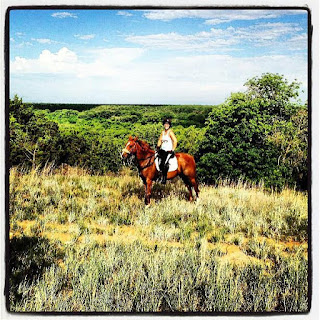 (Not the most flattering picture of me, sitting in slouchy chair seat with her all parked out and inverted....) 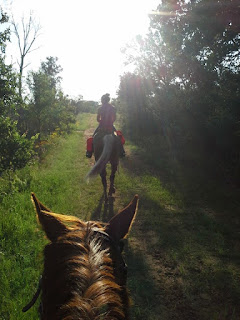 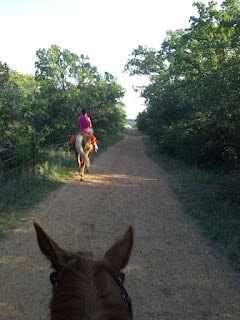 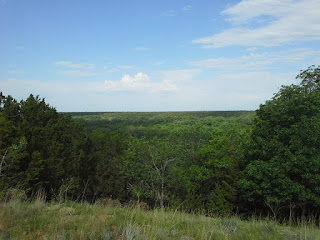 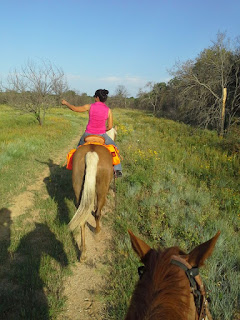 This past week, we had an even MORE epic adventure than the last one, this time at Lake Whitney State Park. We chose this location in the hopes that we'd get to go in the lake itself, and we were not disappointed! (Actually, I think we were not *supposed* to go in the lake... but we did anyway.)
The trails themselves were lovely - flat, wide, white sand with beautiful grassy fields and some forest. I could have probably gone bootless, but chose to keep the boots on anyway. We walked for quite a long ways, found some cows, and found the lake, which we promptly went along and walked in for awhile. We got lost in the underbrush trying to get back to the trail, and O nearly lost her noodles when her buddy left her (as per her usual... it wouldn't be a trail ride without at least one total meltdown on her part when her friend leaves! Thankfully, these are getting less outrageous and fewer in number.)

Halfway through our ride, we were walking along and chatting, not paying much attention to the path. Abruptly stopped mid-sentence at one point, S shocked me with an "OH MY A GOD SNAKE!", pointing to the ground right beneath O's feet. I had only a second to register what she was saying before I heard "crunch, crunch", and booted her forward. It was a GIANT bull snake, probably almost 6' long, and O STEPPED RIGHT ON IT, TWICE. It never once tried to bite her, by some strange miracle - it was just trying to get away. O, unfortunately, assuredly broke its back in several places... ouch. Served us right, and we paid MUCH closer attention to our path after that point. 10 minutes later our astute observations served us well, as a big rattlesnake showed up to our left and made a speedy beeline right for O, rattle going. We got out of Dodge pretty quickly, and thankfully didn't see any others. Note to self: Texas flora AND fauna is scary!

After a number of hours, we decided to loop back to the lake, and let the horses stretch their legs with some trotting and cantering. This quickly became a flat-out race back to the lake, hauling butt at top speed along the wide, flat trails as the lake came gradually into view. O had way more speed to give, and required no encouragement whatsoever - the girl's got some real afterburners! On S's riding app, we clocked ourselves at almost 25 miles per hour (and O was going faster, as she went from way far back to passing her buddy), which is almost 670 meters per minute. As a comparison, the average speed of an Advanced horse on XC is about 570 meters per minute... we were going FAST! The horses are very fit at this point, and neither of them were even breathing when we slowed down. They were, however, quite hot and sweaty, as the temperature was fast approaching 100 degrees. We decided it was high time at that point for a dip in the lake, since we were roasting too!

I had no idea how O would handle a swim in the lake, since I hadn't ridden her bareback before and certainly hadn't ridden THAT far into the water. She walks into water no problem (although she does it better with a friend leading at this point), but this was something altogether different. We stripped off our tack and most of our clothes (thankfully nobody else was around!), led the horses out to a partly submerged stump, and shimmied up bareback. O didn't care in the slightest! We waded out until our knees were totally submerged, and at that point both horses made a serious about face and went back to shallower water - we figured that maybe they could feel the surface changing underneath them, and decided to trust their judgement. No need to get stuck out in the lake.
In the shallower water (up to mid-barrel on them, and ribcage for us), we both jumped off and floated around, still holding the reins. The horses stood totally immobile in the cool water with their eyes closed, swaying back and forth in the waves in total bliss. We jumped around, splashed, stuck our toes in their noses (which they thought was great fun), and bobbed around in the water for about an hour or so. I didn't want to ever get out, it was SO fun and refreshing! Eventually, we decided that we had better get up and go, since we were all turning into prunes. It was AWESOME. 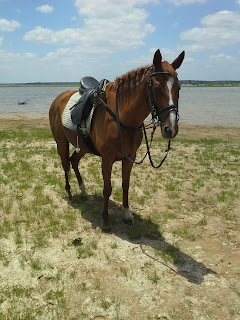 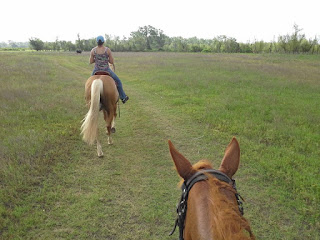 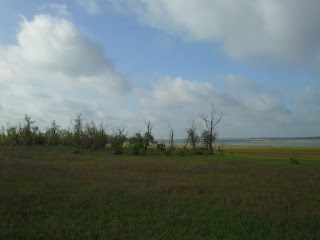 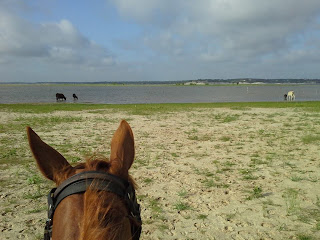 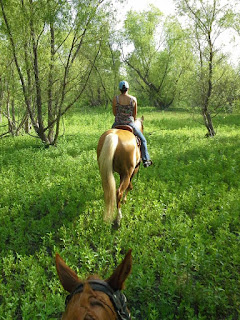 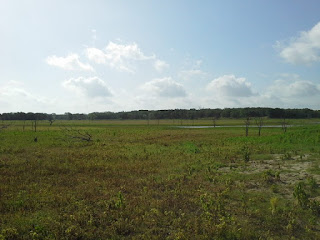 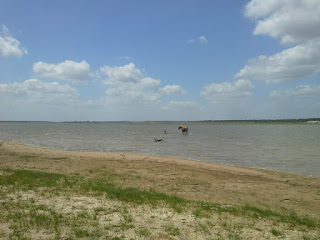 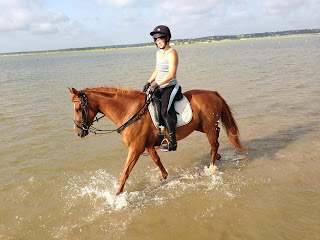 (Again, with the flattering slouch and squinty face...) 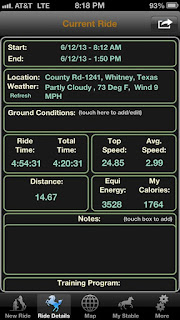 Our ride stats. The app is called Equitrack, and it's accurate for the most part in terms of speed and mileage. Sometimes it doesn't always get the ride time right (and definitely not the temp... it was NOT 73 degrees!), but it got it mostly right.
Wish I had more pictures of us swimming, but it's a bit hard to do that when you're in the water!

To quote Calvin and Hobbes, these days are just packed!
Posted by Andrea at 8:56 PM