How To Get Your Horse Really, Really Broke

Before I moved to Texas and was surrounded by western folks all the time, the concept of "getting a horse broke" sounded a bit like something only those heathen cowboy-types did. Having spent a lot of time down here around "English" horses versus "Western" horses, I have firmly decided that there is clearly something to  "getting a horse real broke." (Bad grammar included.) At the rehab farm, I HATED the English horses (eventers, dressage horses, jumpers, etc) - they couldn't hard tie, some couldn't even crosstie, they didn't stand still, they didn't lead well, they dragged their handlers around, they were a general nightmare. (The racehorses were no better... they sort of fell into the "English" category.) Cutting horses, reiners, barrel horses... they all varied a bit. But rope horses? Man, rope horses were BROKE.
I LOVED the rope and ranch horses whenever they'd come in. They'd seen it all and never, ever complained about anything. Nothing surprised them. They stood like rocks. They tied to anything. They were quiet. They were interested but not concerned about ANYTHING. They ALL were like that. They were SO BROKE. Some folks are very nice to their rope horses, and some are very mean, so I'm not condoning rope training... it varies by the individual. What rope and ranch horses consistently have in common is that they've all been there done that and seen it all, and you can throw everything and the kitchen sink at them and won't phase them if they've been properly exposed.

(Where I deviate from the western sense of broke is that I don't really apply it to actual training - there's hardly such a thing as a "broke" dressage horse, because there is always more to learn and refine and finesse with the dressage horse. A broke rope horse knows his job and runs out there and does it exactly the same, every time. It's not quite the same with a dressage horse!)

O, as far as I can tell, didn't have a ton of 'worldly' exposure when I got her. Our first few rides on the trail were a bit terrifying - she bounced along with springs in her feet, jumping and starting at everything that moved, moments away from total explosion the entire time. The first time we trailered her to an arena, she zoomed around at warp speed on the end of the lunge, cutting corners the entire way and snorting her head off. There was a pen full of roping steers next to the arena that she WOULD NOT go near - she was TERRIFIED of them! (I don't know if she had ever really seen cows before, much less ever gotten close to them! Lucky for her, Texas has about ten gazillion cows in it, so she has since had to deal with cows every day of her life. There is even a herd of cows that lives in the pasture next to hers... talk about learning by immersion!)

Well, I thought, as I hung on for dear life on those first few rides.... it's time to get this mare BROKE.

If you've been following her journey you'll have seen her successfully navigate a plethora of things, from miles and miles of crazy trails to swimming in the lake, and the more places we go, the more exposure she gets. We go into situations like this with a low-key attitude, so she has the time to see, process, and accept all the weird things that I keep exposing her to, without the pressure of being asked to perform. When she goes to shows where she WILL have to perform, all the exciting external stimuli that takes place in a show atmosphere will be an increasing non-event. The more things she sees, the quieter she gets, and the faster she processes. This mare, who I had a death grip on two months ago whenever I rode anywhere outside of the roundpen, much less anywhere exciting, is becoming a sturdy ATV that will literally go anywhere that I point her and not care about anything going on around her. It's AWESOME.

Last night's adventure took us to a local arena where they were holding team roping practice for the night. I had planned on giving O the entire week off, but I couldn't give up that opportunity! It was almost 110 out, and I was feeling particularly lazy - who wants to lug tack around in that kind of heat? I decided that instead of dragging all my tack over to the trailer, I'd just sit in some of S's western tack. O hadn't ever been in a western saddle before, much less one with a back girth, but ehhhh... why not?

Lucky for me, she didn't care at all. She loaded and unloaded like a pro, took a nap while we drank some wine, and wandered around like a perfect lady once I mounted up.

She was VERY interested in the cows, in a playful way... way more than ever before! 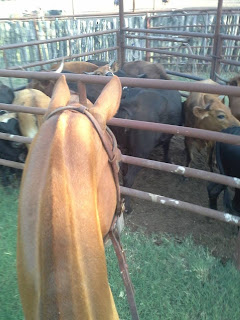 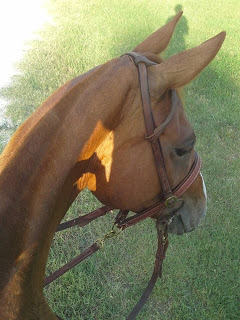 Actually, she looks pretty darn cute in that tack.... mule ears and all!

She stood immobile at the far end of the arena for awhile watching the ropers practicing, interested but not excited. Every time they ran a steer through without roping, we trotted after it until it reached the strip chute. She caught onto that game immediately, and was quick to turn after each one to chase them down. Maybe she wants to do some team penning for fun? (On the aside, I bet you this mare would make a KILLER barrel horse.... she can turn on a dime and run like hellfire!)

We trotted around for awhile and she threw her head like a maniac for most of the time. She was not amused with the particular snaffle I had picked for the night, and was sick and tired of all the little cattle flies flying up into her face. We did manage to have a few decent moments:

Check out her total nonchalance that a random steer is running around in the arena with her... I know a lot of horses that would TOTALLY melt down if they saw that!! 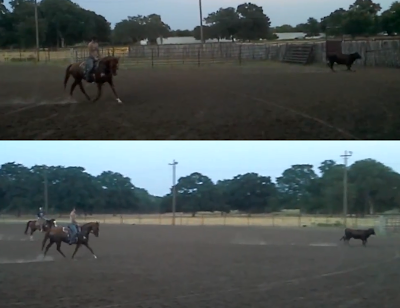