KITTEN UPDATE! We went back to the vet, and as it turns out, the little sh*tten's leg (not his real name, just his nickname for being such a little you know what!) is healing so well that we don't need an amputation after all! His spongy little bones are coming together of their own accord, and while he might always have a shorter leg and a mechanical limp, he is using the leg well and he'll get to keep it after all! I'll be returning donations unless otherwise specified - THANK YOU so much to everyone who donated!!!!

You know, when I first got O, the entire reason for getting her for as dirt cheap as I did was because the mare would not go forward to save her life. She literally would not go faster than a walk - she'd just stop and pin her ears and refuse to move if you put your leg on her. Well, that certainly didn't last very long! My entire problem at this point in time? Getting her to SLOW DOWN!

O is a veritable Energizer Bunny, or Little Engine That Could, or Perpetual Motion Machine, or occasionally Speedy Hellbitch - whichever name sounds most appropriate on each given day. I appreciate that she wants to go forward and is full of power when she does so, but she also uses speed as an evasion. If you trot fast enough, you'll either a) eventually break into the canter, which is easier or b) disconnect through the back and run around hollow, no matter how much it *looks* like your head is down and pretty-looking. (It's all a lie!) There is a fine line between having a forward horse and having a horse that is running away with you (and yes, they can run away with you in the walk and trot!), and O constantly toes that line. She alternates from perfectly reasonable forward trot to speedy hollow park trot in an instant, although her random upshifts are getting less frequent and are not particularly dramatic anymore. She still struggles with the idea of not only half halts, but downward transitions and actual halts themselves. The mare just wants to GO, and she wants to go ALL the time. And the fitter she gets, the more she wants it.

Don't get me wrong, I really like a forward thinker. I hate a lazy horse, and I loathe one that needs to constantly be nagged forward. I wouldn't say O is a hot horse, in that irrational TB way that you sometimes get in off-track horses... she is my kind of forward, more than willing to walk along on a loose rein and be chill but always ready to turn up the volume when asked. She doesn't do any of those silly hot-horse things, like jigging or dancing around or presenting extreme anxiety. She just has a motor on her that won't quit, and when she gets rolling, she GOES.

With that in mind, we're starting to add in some conditioning work, only we're not. I really don't want to over-fit her, I just strongly believe in cross-training and working different muscle groups. Our "conditioning" rides, aside from our long hacks out on trails, consist of just a few minutes worth of trot sets, and just a few minutes more of canter sets (about 2 mins each). Mostly, it's just a chance to let her stretch out after working on some more compressing dressage work the day before (I use the term dressage loosely here with her, as she's far, far away from being a presentable dressage horse... mostly I mean working on taking a constant and responding promptly to transitions!)

What I've found on our "sets" conditioning days is that a) the sidepull is DEFINITELY NOT AN OPTION, and b) she does some excellent dressage work when you're not actually asking for it. I might try the sidepull again at a later date, when she's a little more broke, but for going faster than a walk? Not an option. It started out well on our first conditioning day, with a long rein and a nice forward walk, but when I bumped her up into trot? Insta-uncontrollable. I had this image in my head of her trotting out on a nice loose rein, forward but perfectly content to bop along on her long rein.... and that image immediately vanished the second I started trotting. Her head went up into the stratosphere, her neck inverted, and she almost immediately broke into the canter. I couldn't slow her down, turn her, or get her to un-invert. The more I tried, the more she continued to totally ignore me. I eventually completely gave up, grabbed my right rein with both hands, hauled on her as hard as I could in an attempt to do a one-rein stop, and ran her into the fence. She finally stopped with that, and I tied her up and went back to the tack room for the blue bit. To my surprise, once it was in she was PERFECT - reaching for the contact, stepping through without rushing, using her back and minding her manners. Who knew! (I know I'm *supposed* to be all into natural stuff like bitless bridles and treeless saddles, but the truth it that most of my hotter horses can't stand or deal with the bitless bridles. Gogo hated them, Immy dumped me when I tried one, and O totally blew me off when we did anything faster than meander. P-mare, on the other hand, LOVES her bitless and acts like a fool when you use a bit on her. She was already quite finished when I got her, whereas the other three were either completely unbroke or very green... perhaps it's something in the way I train them? I don't know. Mine just like bits!)

Our "sets" are totally nothing to be excited about - two sets of 3 minute trots, and two sets of 2 minute 350mpm canters - but I don't need her to be ANY fitter than that for the time being. It's mostly just to get her moving out and using different muscle groups... I fully believe in cross-training! 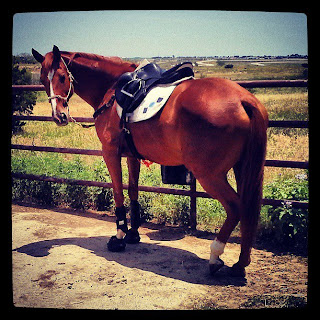 She's also had a few lunge sessions - one a week in the Faux-ssoa to offset the other work we're doing: 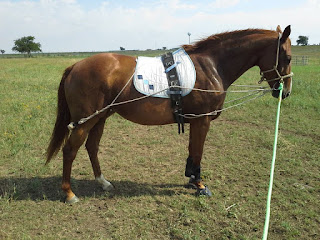 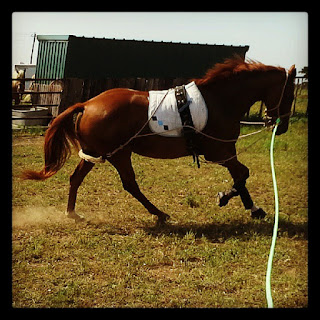 And, EARLY in the morning, before it gets hot! 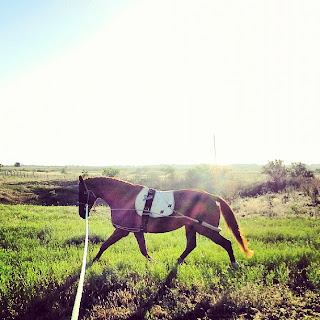 Coming up next... we have some INCREDIBLY EPIC Trailventures, including swimming in the lake, killing snakes, galloping flat out, and accidental mountain climbing! For right now, it's BEDTIME!