The Trouble With Tack

First off, thank you SO MUCH to everyone who has chipped in for the little munchy kitten's surgery!! He's doing really, really well, perking up every day and starting to get a little more mobile. He needs to finish his course of antibiotics and get some strength back, and then he goes in for surgery. (This will give him the best chance at making it through surgery... going under can be risky when they are so tiny!) I'll keep everyone updated on how he is doing! 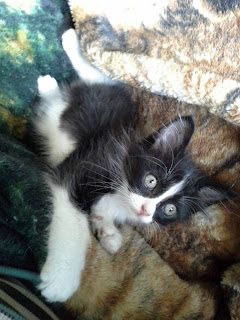 In other news, I am having to face the fact that neither one of my saddles is a good fit for Immy. I got away with it while I was breaking her, but now that she has gained some weight it's becoming an issue. It's not that the saddle itself doesn't fit, it's mostly the fact that she has a narrow and far-forward girth area and enormously sprung ribs (and belly) right behind it. Couple that with her mutton withers, and it pulls saddles forward like crazy. If the saddle gets too far forward, she stops dead. If it really gets too far forward, she bucks. If you get off and fix the saddle when it slides forward, it's not a problem... she'll let you know when it's sliding because she stops. But it's not exactly a feasible option to dismount repeatedly during a ride!

Things to try: no-slip pad (I have one, worth a shot), a crupper (as a last resort ONLY), or an anatomically shaped girth (possible, since I have one, but mine is so wide that I don't think it will make a difference either way). Things to really consider: if I want to ride this mare more than I have been, I need different tack. The problem with this? A) I cannot possibly afford all new tack at this point. B) I am hopelessly attached to my saddles and they fit P well and fit O as if angels created them custom for her. (O and Gogo have exactly the same back!) If Immy was shaped more like the others, this would be less of an issue. Or... if I had a saddle to fit a more mutton-withered horse... a saddle that also had a back girth, like the one I broke her in (which stayed put).... then it would stay where it belonged.... wait a minute. I should try a western saddle. They're made for horses built just like her, AND they come equipped with back girths which will help the saddle stay put around her belly. It doesn't have to be forever, just for now... it's worth a shot. S has an abundance of them, so I will have to ask if I can borrow one!

She's had her month off and she looks great - her weight is good, her coat is great, her demeanor is excellent and she is acting like her silly, sweet self. She was very determinedly trying to open her gate today when I was making grains - she had the whole chain in her mouth and was trying to wriggle her lips just right to see if it would open for her. Such a goon...
The plan at this point is to just let her come along as slowly as we need to - since I have O to focus on competition-wise, I can let Immy take all the time she needs to slowly come into herself. Some trail rides, some fun things, some light work.... just having fun, no pressure. I see no reason to rush this mare... it will only get us nowhere. She's come so far, and I am not about to let her backslide. She needs to just have fun, and enjoy herself in whatever we're doing. I think that's really my only goal for her in the foreseeable future.... have fun, in whatever we're doing. As long as she is enjoying herself, I'm happy. Think that sounds like a fair plan for the time being? 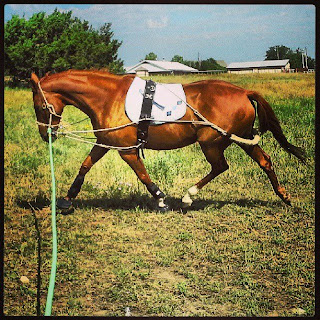 Email ThisBlogThis!Share to TwitterShare to FacebookShare to Pinterest
Labels: saddle